If you’re up in Canada’s Far North this summer, somewhere in the border area between the Yukon and NWT, keep an eye on the skies for Fireweed Helicopters’ blue-and-white Bell JetRanger 206L. If you see it, chances are that Jonathan (Jock) Mackay is at the controls. Don’t be worried that Jock will make a mistake and fall out of the sky; with 56 years of flying experience under his belt, this 75 year-old pilot is no rookie.

If you’re up in Canada’s Far North this summer, somewhere in the border area between the Yukon and NWT, keep an eye on the skies for Fireweed Helicopters’ blue-and-white Bell JetRanger 206L. If you see it, chances are that Jonathan (Jock) Mackay is at the controls. Don’t be worried that Jock will make a mistake and fall out of the sky; with 56 years of flying experience under his belt, this 75 year-old pilot is no rookie. 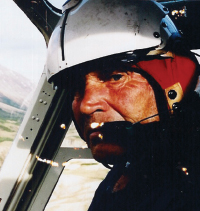 A Lifetime in Flight
Mackay has loved flying all his life. However, it took a 1948 airshow back in his native Scotland that persuaded him to make it a career. “There were Spitfires, Hurricanes, and all that old WWII stuff,” he says. “It was just inspiring!”

Mackay signed up with the RAF in January of 1952, training on the Tiger Moth and the Chipmunk. However, he didn’t win his wings until he immigrated to Canada in 1954 and joined the RCAF. “I had planned to go into farming with my uncle back in Scotland, but he was killed while climbing a mountain in Scotland,” he says. “This left me not knowing what to do with my life. Then, as luck would have it, I happened to meet the then lieutenant-governor of Manitoba, Eric Willis, curling in Scotland. We got to talking, he invited me to come to his small ranch in Manitoba and be a cowboy! Well, as it turned out, I wasn’t cut out to be cowboy; I saw the jets flying overhead, so I joined the RCAF instead.

Once in the RCAF, Mackay was posted to No. 4 Flying Training School at Penhold, Alta., with a later posting to Portage la Prairie, Man. During his training he learned to fly the Harvard trainer Mark II, the Beech Mentor T34 (based on the popular Beechcraft Bonanza that is still in production 60 years on) and the Lockheed T-33 Shooting Star jet trainer. “Compared to a Tiger Moth, the T-33 was smooth and quiet to fly,” Mackay says.

After getting his wings, Mackay was posted to Trenton to be a Harvard training instructor. There he got the chance to fly the legendary P-51 Mustang and the twin-engined Beech 18. As his career in the RCAF progressed, Mackay was sent to various bases, including Baden-Baden in Germany. “There were still enough of the WWII commanders there to retain that old ‘gung-ho’ attitude that had characterized the wartime RCAF,” he recalls. “It was a great place to be posted.” As the years passed, Mackay learned to fly such legendary aircraft as the F86 Sabre and the CF-5.

From Fixed-Wing to Helicopter
In 1971, Mackay was posted as a tactical evaluation staff officer to St-Hubert  mobile command. While there, he had two experienced helicopter pilots under his command, whose performance he was to evaluate on an ongoing basis. “I managed to convince the general there that I really couldn’t supervise people properly if  I didn’t know how to fly the helicopters they flew,” Mackay says. “He agreed, and so I got to take training courses to fly the CH-135  Huey, the CH-136  Koiwa, and the Sikorsky  H-19.”

“This training went way beyond what RCAF headquarters had authorized me to do,” Mackay admits. “The general subsequently got a ‘nastygram’ from HQ telling him to reverse his decision. He sent one back telling them that ‘Mackay will continue to fly helicopters because I want him to!’”

By the time Mackay was “put out to pasture” by the Canadian Armed Forces (as it had been renamed) in 1980, his love of helicopters was unwavering. “I just have no desire left to fly fixed-wing,” he confesses. “Helicopters just provide so much variety of flight, that they are much more fun to fly!”

Still, Mackay wasn’t able to give up fixed-wing aircraft immediately. In fact, he flew twin-engine Douglas A-26 water bombers – originally built in 1942 as attack bombers – from 1980 to 1999. (Aircraft fans may remember that a silver-skinned A-26 sat atop an industrial building beside Highway 401 east of Toronto for many years.) “I flew A-26s in the summers,” he says. “During the spring and fall, I did short helicopter contracts for different companies; mostly in the Yukon.” Meanwhile, Mackay and his wife settled in Grand Forks in the B.C. interior, where they live to this day.

In 1988, helicopters took on a far more prominent role in Mackay’s life, when he helped set up a medevac service for VIH Aviation Group in Prince Rupert. “I flew a Bell 212 for them,” he says. “It was fun flying in and out of Prince Rupert; at least when the weather was good.” At the same time, Mackay started working for the Alberta government flying Bell 206s and 222s.

In the 1990s, this work gradually led Mackay to the Yukon, where he became an independent helicopter pilot working for companies such as Fireweed. “Today, I basically fly 206s on geology, wildlife, fisheries and firefighting missions,” he says. “It’s enjoyable work, and beautiful country to fly through.” But the work could soon be over, because Mackay is thinking of retiring this year. “I think my wife deserves a break by me continuing not to fly,” he says. “Of course, she may then need a break from me!”

Lessons from a Life in Flight
As a veteran pilot, Mackay has pretty much seen it all. He’s endured an ejection from a CF-5, flown a helicopter nearly blind through fire smoke in the pre-GPS days, and had an unfortunate RAF student pilot vomit in their shared Harvard mid-flight. “During hot days, we would often open the front and back canopies to let the wind venturi through the cockpit, to cool things down,” he says.

“Naturally I was in the back, while the student was in front. All of a sudden my student says in a plummy British accent, ‘I hate to tell you this old man, but I think I’m going to be ill.’ The next thing I knew, he threw up in the Harvard. Thanks to the venturi effect, it hit me immediately. All I could do was try to maintain my sense of humour.”

Harvards were probably the most cantankerous machines Mackay ever flew. Not only were they noisy and lumbering, but they had a nasty tendency to groundloop if landed improperly on the runway. “I remember one time that a student made the Harvard groundloop so quickly, I didn’t even see it coming,” he recalls. “All of a sudden, we were going backwards and parts were flying off the plane!”

Then there was the time he was piloting a float plane – not a Harvard! – and noticed that every time he took off from the Ottawa River, the aircraft had a harder and harder time getting into the air. “We landed it, and nearly sank; turns out that the floats were leaking and taking on water in a big way,” Mackay says. “We just managed to taxi it to shore and beach it before things really got out of hand!”

There have been tragic times as well: “My son Ian also flew an A-26,” he says. “However, he was killed almost five years ago while bombing a fire near Cranbrook with an Electra.”

So what has 50 years-plus worth of flight experience taught Mackay? “Nothing,” he jokes. “I’ve never had any doubts in the air; I’m supremely confident!” Becoming more serious, he says the most important quality for a pilot to have is the ability to concentrate and stay calm at all times, no matter what is happening around you. “Don’t flap; just keep flying the airplane if you have an emergency,” Mackay advises. “That’s how you get out of trouble.”

Will he really hang up his wings after this summer? Yes … and perhaps no. “I’m 75 years old and there is a time to quit,” he says. “But a friend of mine owns a helicopter and he’s in retirement. So perhaps we’ll mutually massage each other’s egos and go flying every now and then. You never know!”