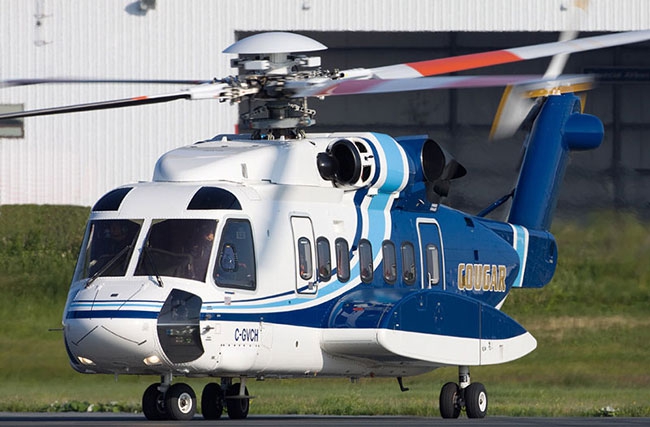 Cougar Helicopter remains one of the world’s most reliable oil and gas operations. At N47°36’58

On a day with clear blue skies and brilliant sunshine, one could think they found a little piece of paradise. But don’t be fooled! The unforgiving North Atlantic brings with it some of the world’s harshest and most challenging weather conditions. Fog, high winds, freezing rain and sea states are routine to flying conditions, as well as maintenance and ramp operations, off the coast of Newfoundland and Labrador and Nova Scotia in which Cougar Helicopters operates. However, this is home for Cougar and operating safely and efficiently in these conditions is what makes Cougar known as a harsh environment specialist.

At the root of its success in these challenging conditions is Cougar’s Safety Management System (SMS) program. “Over the years, safety has been paramount in everything we do,” said Hank Williams, chief operating officer and a 20-year veteran of the company. “We initially implemented a SMS program 10 years ago. We had separate elements of a SMS in different departments, but they were not consolidated into one system.”

A self-awareness of the lack of depth of the program grew within the organization. Its safety program was not inclusive enough to the then management team and some supervisors. So, much so that at the start of the 2014 auditing program, Cougar had to put its hand up to its customers and conclude that change was required. The audit results reflected the same awareness and so Cougar aggressively went to work. At one point, there was a false start when the direction they took did not work out as they had anticipated. The potential consequences could not be understated. There was a latent threat to the entire operation.

The management team then went looking for outside guidance and found it in British Columbia, the home of Cougar’s parent company, VIH Aviation Group, which is headquartered in Victoria. The company discovered and hired Gary Grass and Abante Intelligent Solutions, safety and quality management consultants. Abante’s forte is SMS and its clients include rotary- and fixed-wing air operators, airport, oil and gas producers, hydro utilities, academic institutions and industry councils.

“Cougar operates in the very challenging North Atlantic,” Grass said. “They fly multi-engine, multi-crew helicopters in weather conditions that will send shivers down the spine of anyone not operating there, particularly the winter conditions. And they are a very progressive company, highly safety focused.”

Cougar had initially introduced a SMS program about 10 years ago. The first few years, Grass explained, “They built their box. They worked with the mechanics and their customer evaluations went reasonably well. However, the recognition that it wasn’t where it should be caused Cougar to dig deeper, to add safeguards and to enhance training.

JJ Gerber, operations services manager and also a 20-year employee said:  “We thought we were managing safety. Events were being reported and investigated, issues were being addressed, and in some cases elements of just culture applied. But it was not cohesive and aligned across the organization. In other words it was done in silos. KPIs were generated, however, they probably had more to do with business progress and efficiency rather than safety. We were managing safety but we needed an integrated  safety management system.”

Gerber added, “What was missing was how the elements of a SMS-related to each other. Just as a financial system touches all departments, the principles of a safety system all relate to each other and form a bridge. Though it was a lot of work, the activities SMS makes you do, teaches you about the organization. The last two to three years, I have learned more of how our pieces work together to make safety happen than ever before.”

“It’s not about the box,” Grass said. “It’s not about any of these colloquialisms you hear. Safety management is about how does this work as an integrated group and where are the barriers to success.”

By way of an annual Safety Case, Cougar management strives to demonstrate that the company is committed to establishing and nurturing safe systems of work and a positive safety culture focused on the wellbeing of its employees, customers and passengers.

Consistency Matters
The prelude to the organization’s safety analysis was almost a self-inflected wound. The aircraft that brought Grass and the VIH CEO to Newfoundland also had as passengers the chief corporate counsel, the vice-president of business development and the chief financial officer. Many organizations today have rules preventing multiple senior executives from flying on the same aircraft, whether private or commercial.

“What happens when the aircraft crashes?” asked Grass. Obviously it takes with it a significant portion of the business’ brain trust and such a crash could be fatal to the company’s future as well.

“When we arrive at our destination,” Grass noted, “if anyone is watching us come off that aircraft, if our message for the next week is all about safety management, do our words and what they saw not contradict each other? It hit home. They really needed to adjust, from the top down, their concepts and strategies of what this really looks like.”

As part of the transformation of Cougar’s safety persona, the company hired Willis Jacobs, a Canadian Air Force veteran with aero engineering, maintenance management and project management experience. “From the start of this, Gary and I spoke the same language and shared the same ideology about what a safety culture is all about,” Jacobs said. “It’s more than an academic exercise.”

For example Jacobs described a process chart developed for the safe-to-fly process. “If there’s an event with an aircraft or individual, we have quite a detailed chart that takes us through everything that’s related to just culture, fleet grounding, etc. from the perspective of both the helicopter and the staff themselves making sure that if we put someone back to work, they have had the proper assessment, proper coaching, proper retraining – whatever it might take to ensure when they go back flying, they are doing so in a safe manner.”

Another adjustment was the creation of an Occurrence Review Board (ORB) in which every aviation or health and safety event is discussed with all departments represented. The investigation includes follow up actions and analyses of related procedures.

The annual Cougar Safety Case demonstrates and highlights that the company is a proactive organization in its approach to identifying, assessing, analyzing risks and the application of risk mitigation procedures, management of change, as well as responding to incidents and implementing corrective action within the proactive system. Jacobs noted that awareness, assurance, training and accountability are the cornerstones of the risk management strategy.

Indeed, about six weeks after the new “unifed SMS” was implemented, Cougar’s oil and gas clients came by to take a look. They were pleased to see a new and improved more robust SMS program and identified the beginnings of a turnaround.

Cougar Helicopter remains one of the world’s most reliable oil and gas operations.

A Good Temperament
Two years removed from the implementation of its new SMS, Grass maintains Cougar is “arguably one of the top-performing SMS organizations in the world.”

“We’ve got a good temperament that fits with the organization,” Jacobs said. “You’ve got to make this personal. It’s not just the safety and quality manager’s job. It’s not a manual on the shelf anymore. It’s vertical and it’s lateral and we use it every day.”  Indeed, it is the basis of how Cougar operates.

Oil and gas customers expect medium and even small companies to demonstrate the same elements of SMS as the larger service providers, Jacobs noted. “They ask for it in the contract. But they don’t provide a lot of detail,” he said.

How does Cougar determine that the new way of SMS is an improvement?  One measure is an annual, voluntary internal survey. It is a blunt, no-nonsense survey of all employees – engineers, pilots, support staff. Employees are asked what they believe they are getting out of the SMS and whether there is more work to be done. In the first edition of the survey last year, 47 per cent of employees responded. In January 2017, the second edition, the response rate was 61 per cent. “That to me,” Jacobs said, “is the biggest test and the biggest indicator.”

There has also been an increase over the past two years in the number of reports. That suggests employees believe reporting will be acted upon, according to Williams. “It’s a sign people want to contribute, they want lessons learned and they don’t want a repeat of hazards,” he said.

Abante’s Grass cautioned, however, that “this is a fragile environment because the success of these types of programs are solely and exclusively dependent on the type of leadership at the helm of a SMS-management organization. It comes down to the people and the message the organization tolerates, or does not tolerate, within its ranks to encourage and remove the barriers to individual success.”

In some organizations, “the message from the top gets skewed on the way down.” Safety is claimed to be “a prime focus,” but in the functional efforts to get the job done and make money, it can get pushed down the priority list “when the challenge is to put bread on the table and not upset the
apple cart.”

Safe? Prove it.
Sister company VIH Helicopters was so impressed with the change in Cougar’s culture, they have begun adopting a similar but tailored approach to SMS. VIH is Canada’s oldest privately-owned helicopter company and provides support for emergency medical, firefighting, heli-logging, aerial construction, heli-skiing and charter.

“We always knew we were operating safely,” said Jen Norie, general manager. “But we couldn’t prove it because very little was being formally recorded. So, how do you know for sure? How do we prove it to regulators, to ourselves, our employees and to their families?”

Unlike Cougar, which is driven by its oil and gas customers, SMS is not mandated for operators like VIH. They’re doing it anyway. “People are starting to think differently, to work proactively in order to identify risks that can be mitigated,” she said.

Martin Childs, who is transitioning into a role as VIH’s director of safety (while still acting as operations manager for the parent company’s YYJ FBO Services at Victoria International Airport), said in 2016 there were 25 items reported by VIH Helicopters staff. “In the first two months of 2017, there have already been 17 items reported,” he said. “We’re seeing active participation in the new program.”

Childs said one way to spread the safety culture in the company is to address safety with employees at every opportunity, as well as to make the online internal magazine, Rotorwash, required reading. “Safety is always a hot topic. And it gets people to our online safety reporting site, which includes a summary of hazards,” Childs said. “They can see things that have been reported and that they are being addressed. We are all accountable to one another.”

In order to enhance safety operations globally, VIH is talking with other helicopter operators about forming an information-sharing group similar to the HeliOffshore organization, which was initiated two years ago. For more on HeliOffshore’s initiatives, see “Collaborate and Adapt,” page 10.”

“We’re looking at facilitating a similar forum using the Helicopter Association of Canada (HAC),” noted Norie. “Sharing of best practices and safety learnings in an appropriate forum will benefit our industry as a whole – it just makes sense.”

Related
Editorial: A Collective Effort
Personal Side of Statistics
In the Name of Safety
Leading the way: Airbus Helicopters Canada is committed to safety
Tags