Features EMS
A Star in the Canadian Night 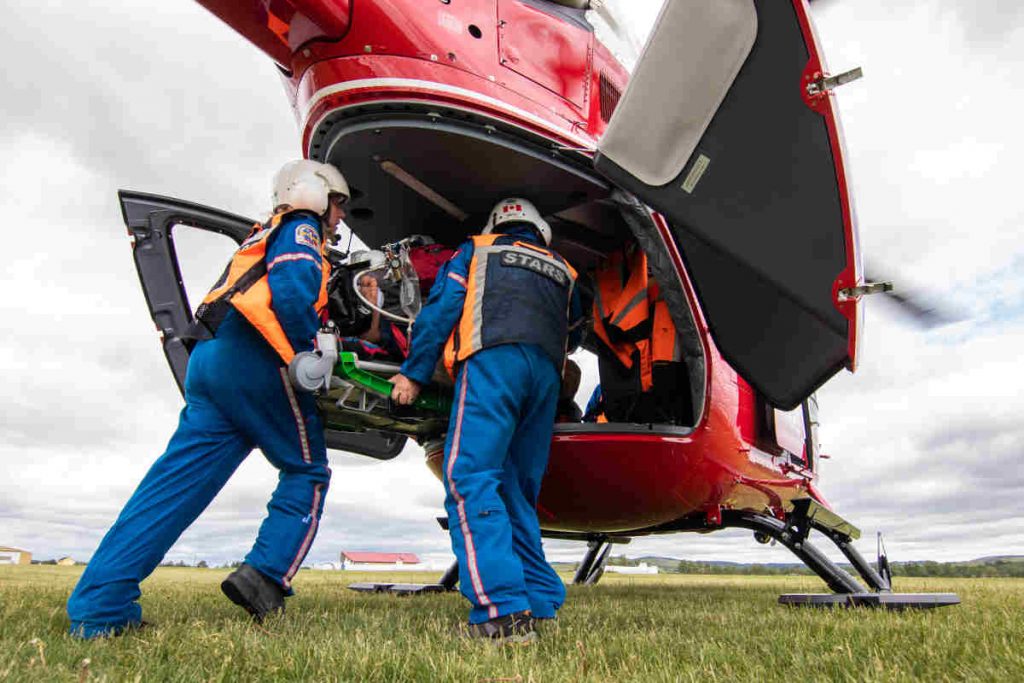 STARS Air Ambulance was founded by two physicians whose personal experience showed them the advantage aerial transport brought to saving patients’ lives. With a fleet of 11 helicopters, the non-profit, charitable organization now serves communities in four provinces in Western Canada.

VIPs – the term STARS, which stands for Shock Trauma Air Rescue Service, uses for its patients says it all: To the HEMS critical care provider, those it cares for are not just patients, but Very Important Patients.

“We take the job seriously. The accountability, we think, is massive,” says Andrea Robertson, president and CEO, STARS. “We want to make sure we’re providing the very best care to our patients – essentially we are a flying intensive care unit to them.

“Canada is characterized by vast geographic areas and small populations which might not have access to a hospital, particularly those providing higher-level care,” Robertson continues. “The people of Canada see helicopter EMS as a means of having rapid access to critical care wherever they are.”

With 11 helicopters in its fleet, STARS is able to cover such distances effectively. Six years ago, the organization began looking for an aircraft capable of serving its six bases; and subsequently chose the H145, for a total of nine to be delivered by 2022. STARS in May 2019 took delivery of its first two Airbus H145s and marked the occasion by flying in its very first patient, Kelly Waldron, with registration C-GKLY – recognizing her first name – adorned on one of the helicopters.

STARS is replacing its current fleet of BK117 and AW139 helicopters with the H145s, with an estimated cost of $13 million each, medically equipped. The global Airbus H145 fleet has achieved more than 100,000 flight hours since entry into service in 2015.

“The decision was made to go to a single platform because it is considered best practice in an organization of our size – from an operations, safety and efficiency perspective it was the best decision,” says Robertson. At the end of 2019, STARS signed the first Airbus HCare support and service contract in Canada for its H145 platform.

With its first mission in 1985, STARS has now operated more than 42,000 missions from bases in Calgary, Edmonton, Grande Prairie, Regina, Saskatoon and Winnipeg. In its 2018/2019 fiscal year, STARS completed 2,878 missions with an average of eight daily missions. The distribution of its missions is comprised of 60 per cent for inter-facility and 40 per cent for scene calls, such as roadside, recreational accidents, traumas, industry and avalanche incidents. The robust operation holds a medical staff of more than 100 critical care physicians, paramedics and nurses, as well as more than 80 pilots, and communication specialists staffing STARS’ 24-hour Emergency Link Center.

ALL-TERRAIN CHALLENGES
The organization’s missions take it from the varied topography of the Canadian Prairies in the east to the rugged Rocky Mountains in the west.

“It’s not uncommon for some of our flight profiles to be up to 100 NM one way, a radius of action in which the H145, because of its increased speed, shines,” says STARS pilot John Carson. Based in Calgary, Carson’s work, as part of a four-person crew, which includes two pilots, a critical care nurse and critical care paramedic, takes him into the Rockies and beyond.

“Operating on the eastern slopes of the Canadian Rockies, which are prone to warm Chinook winds, can be quite challenging. And flying into them at night is an added challenge,” says Carson. “The H145 cockpit is fabulous on ight vision goggles, with fantastic visibility. The 4-axis autopilot serves to decrease pilot workload in certain situations. Increasing situational awareness and safety are the HTAWS [helicopter terrain awareness system] as well as the synthetic vision system. These fantastic pieces of kit shine when we go into our mountain environment.”

THE TOP OF THE TOP
“One of the H145’s attributes that we hope not to see is the aircraft’s ability to hold a single-engine service ceiling,” says Carson. “From Calgary, operating at night in the mountains, it’s not uncommon for our en route legs to be as high as 10,000 feet. If we lose an engine and the conditions are of an appropriate nature, we can go right over the top in the H145.”

To carry out its work saving lives, STARS has contracts with three provincial governments. The organization provides medical oversight and is accountable for getting patients to the appropriate level of care. It operates its own 24-hour emergency coordination and dispatch centre. And training is done in-house, too, with experienced pilots like Carson handling the flight crew’s transition to the new H145s.

“It’s awe-inspiring when you see the professionalism of our team and how seriously they take safety,” says Robertson. “Bringing on a new aircraft is a lot of work. We feel so fortunate to have this great aircraft, and it takes a strong group.”

This article originally appeared in Airbus’ Rotor magazine, with edits included by Helicopters.