As a vital member in the chain of survival, STARS is committed to providing the fastest and most effective service possible to trauma patients. With a 250-kilometre range from its bases in Calgary and Edmonton, STARS is able to serve approximately 90% of Alberta’s population and a portion of southeastern British Columbia. 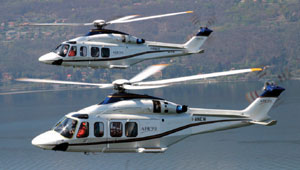 Alberta Shock Trauma Air Rescue Society (STARS) is in the final stages
of securing an order for two Bell/Agusta AB139 helicopters. The $12-
million machines are slated to arrive in late 2007. The new helicopters
will be based at STARS’ existing facilities in Calgary and Edmonton.
They will be a welcome addition to the existing fleet of four
operational Eurocopter BK117s.

As
a vital member in the chain of survival, STARS is committed to
providing the fastest and most effective service possible to trauma
patients. With a 250-kilometre range from its bases in Calgary and
Edmonton, STARS is able to serve approximately 90% of Alberta’s
population and a portion of southeastern British Columbia.

Housed
inside the Calgary operations base, the STARS Emergency Link Centre is
a highly advanced communications centre. The 24-hour ELC provides a
one-number system that is able to determine the best-suited response to
a given situation. One-third of the nearly 1,100 calls that STARS
received in 2004 were to onscene emergencies requiring immediate
patient transfer to hospitals.

Speed and immediate care is
critical, especially when dealing with heart attack and stroke
patients. The threehour window between the onset of symptoms and
medical treatment can be the difference between life and death. Many
rural locations lack sophisticated trauma centres and require immediate
airlift capabilities for some severe patients.

STARS is well
aware of the ageing population in Alberta, especially in rural areas.
As baby boomers reach their fifties there will be a greater need for
medical care and transport. For that reason, STARS felt that now is the
time to look to the future and understand the challenges that will soon
be faced.

The addition of the AB139 will be of great
significance to STARS operations. The helicopter is well equipped for
an operation focused on urgency and patient care. With its deicing
capabilities, more missions can be flown in less than optimal flight
conditions. Bad weather currently grounds 12-14% of calls. An improved
range allows for the geographic operational area to be nearly
quadrupled from what it is today. The ability to serve an even larger
portion of Alberta’s residents is an exciting possibility to the people
at STARS. Communities currently without service such as Fort McMurray
and Grande Prairie would fit inside the operational range.

The
AB139 offers a higher cruise speed than the BK117 that is currently
operated. This would allow for reduced response times, which can be
vital to survival of the patient. Lifesaving and time-sensitive
treatment can begin sooner on critical patients since they reach the
necessary trauma centre earlier.

More patients can be carried in
the AB139 than the existing BK117. The AB139 has the ability for EMS
staff to attend to as many as three patients at once. STARS will likely
adopt a standard two-patient layout for the vast majority of missions,
but it is looking forward to the flexibility that the larger cabin
provides. STARS is a non-profit charitable organization well supported
by the community, especially at the grassroots level. The annual STARS
Lottery, personal donations and calendar sales are vital components of
fundraising. Corporations, individuals and community organizations all
play a significant part in raising the necessary capital to keep the
helicopters flying. An additional 40% of funding is received from the
provincial government through local health regions.

The Vision
Critical Campaign was started as a means of acquiring extra funding for
the purchase of two new helicopters. The VCC has raised almost $22
million of the $25-million goal.

“STARS is owned by the
community it serves,” said Dr. Gregory Powell, chief executive officer,
who has been with STARS since its inception 20 years ago. He is proud
of the accomplishments and the community spirit within the STARS
organization for its 20 years of care in the air.