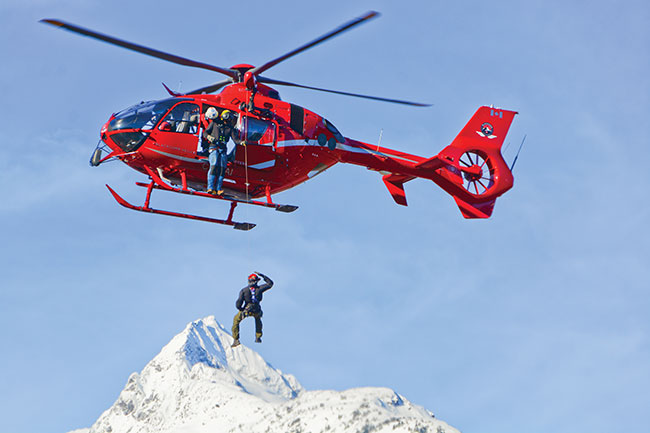 A branch of a helicopter-based rescue service that caters to resource-based industries could be ready to fly out of Prince George by the early summer.

Miles Randell, president of Squamish-based Technical Evacuation Advanced Aero Medical (TEAAM), says he has nearly 20 people signed up to take the training this April and aims to have the branch take to the sky by sometime in June, if not sooner.

He said what TEAAM provides differs from B.C. Ambulance Service in that a crew will be able to reach remote locations, and differs from search and rescue in that each flight will carry two members capable of providing advanced life support.

In the three years it has been operating out of Squamish, Randell said the non-profit has attracted strong support from the forest industry in general and treeplanting companies in particular.

“It’s financed in part through what we call a patronage program which is based on the model they use in Switzerland,” Randell said. “It’s kind of like a membership, so you pay an annual fee to be a patron of our program and that sort of helps us keep the lights on and pay our bills. And then we offer an insurance-based program that covers the cost of rescues when you do need a rescue.”

He said patrons in need of help contact TEAAM directly.

“Our air-ops will answer the call and dispatch the appropriate resources,” Randell said.

TEAAM also works with the Canadian Armed Forces’ joint rescue centre on an as-needed basis. Likewise, he said TEAAM can also respond to calls from the RCMP whenever there is a need for a higher-level of medical care or mountain rescue that a traditional search and rescue group cannot provide.

Including Prince George, he said TEAAM is in the process of establishing in five more communities across the province – Fort St. John among them.

It was launched after Randell and TEAAM vice president Jordan Lawrence lost a friend to cardiac arrest while in the backcountry.

“We’re behind, but we’re catching up quickly and we’ve already made a huge difference in patient care which is first and foremost with our program. But there’s also the financial benefit to the financial system and to WorkSafe from the service that we provide.”

The Prince George branch will rely on a helicopter provided by Bailey Helicopters on a pay-as-you-go basis. About $350,000 has been budgeted to outfit the staff, who will be paid on a per-mission basis.

“It’s about $1.4 million a year to have an aircraft sitting and available. That’s why we’re not dedicating an aircraft right now, we just don’t have that budget,” Randell said. “So paid, on call, we start with about $350,000 worth of equipment and training and then build from there.

“If we were to fully fund the base, it’s about $3.6 million and that includes paid, full-time staff, dedicated helicopter, the complete entire setup.”

Mark Neilsen’s reporting for the Prince George Citizen is funded in part by the Local Journalism Initiative.