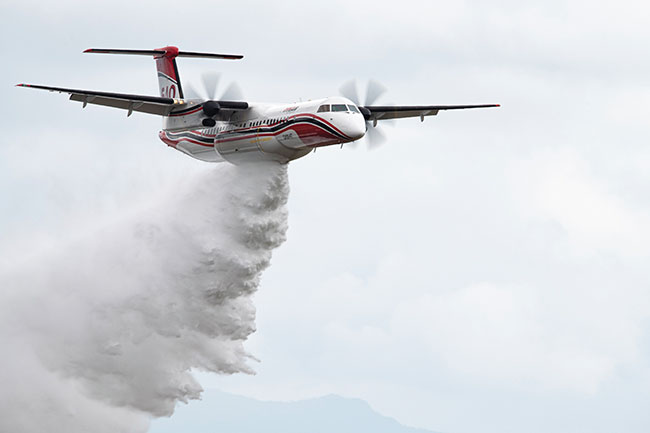 Before the arrival of COVID-19, the AFVS event was scheduled to take place over two days at the beginning of April at Abbotsford International Airport, YXX, which had one of Canada’s fastest growing airports as measured by percentage increase of passenger volume year over year. YXX in 2019 reached the one-million passenger milestone after reporting 127,134 aircraft movements the previous year. In addition to its internationally known airshow, which began back in 1962, the airport’s connection to the global aviation industry is well established through two of its tenants, Cascade Aerospace and Conair Group, which, along with Babcock and Viking Air, featured prominently in the fixed-wing sessions of the ASVE event.

Rotary-wing
Fred Jones, who has led HAC for more than a decade, provided a range of insight into the current state of the Canadian rotary-wing industry in relation to the aerial firefighting sector during AFVS. He paired his discussion with the reality of how COVID-19 is impacting helicopter operators during a 2020 season when Canada saw such low levels of wildfire activity.

In the Fall 2020 issue of Helicopters magazine, Jones explains Canada has already seen a number of helicopter business failures. From mid-March until September, Jones notes 20 helicopter air operators have surrendered their CTA licenses or had them suspended for a failure to meet the conditions of issuance because they were not able to maintain the required liability insurance, or had their licences cancelled. The wet 2020 season in Canada has complicated the issue with lower revenue. Jones points to Alberta figures in 2019, for example, when aerial firefighting services were provided by 71 different helicopter operators from across the country. He notes roughly 90 per cent of those helicopters were on a call-when-needed basis, which complicates resource allocation during a wet season.

Jones points to national statistics available on the Canadian Interagency Forest Fire Fighting Centre’s (CIFFC) website, noting year-over-year statistics between 2019 and 2020 indicate a 90 per cent drop in the National Area Burned statistics. When you consider the national five-year average statistics, 2020 looks even less active. “HAC is concerned that the combination of a slow summer firefighting season and the effects of Covid-19, which are not yet behind us, will result in more helicopter air operators not being available to carry out our important work,” wrote Jones.

In the south, however, helicopter operators were dealing with some of the most devastating wildfires that the United States has ever seen. During AFVS, LA County senior pilot Mike Sagely shared insight into this year’s season and one of the most-advanced rotary-wing platforms in the sector, the Sikorsky Firehawk S-70i. (See Helicopters April 2020 issue for more on flying the Firehawk.)

Based on the UH-60 Black Hawk platform, the modified Sikorsky Firehawk has been in operation for the past 20 years, first as the S-70A and now the S-70i. On October 3, 2020, the first FAA evaluation flight of the S-70M Black Hawk took place at Sikorsky’s facility in West Palm Beach. Sikorsky was working with the FAA to receive Flight Standardization certification for S-70M by the end of 2020 in accordance with the Type Certificate Data Sheet for Restricted Category clearance. This would allow commercial operators to acquire a new production Black Hawk directly from Sikorsky for the first time in the helicopter’s storied 42-year history.

Based on the third generation UH-60M Black Hawk, which entered service with U.S. Army in 2005 and now has more than 1,300 deliveries, the S-70M was granted Restricted Category certification by the FAA in February 2019. This allowed Sikorsky to request FAA authorization to produce the S-70M for special purpose operations within the civil market, including external cargo, agriculture operations, and forest and wildlife conservation. Within the conservation application, Restricted Category aircraft are able drop water as part of an aerial firefighting operation.

Sikorsky one year ago had initial discussions with Transport Canada about bringing the S-70M up north under a Restricted Category certification. The Black Hawk has never been operated by the Canadian military, however, making it ineligible for the same Restricted Category clearance as in the U.S. Transport Canada will need to accept the S-70M Firehawk before Canadian commercial operators can buy the sought-after multi-purpose platform. 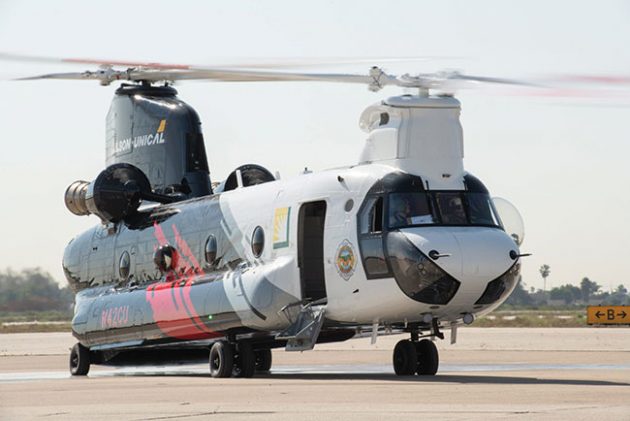 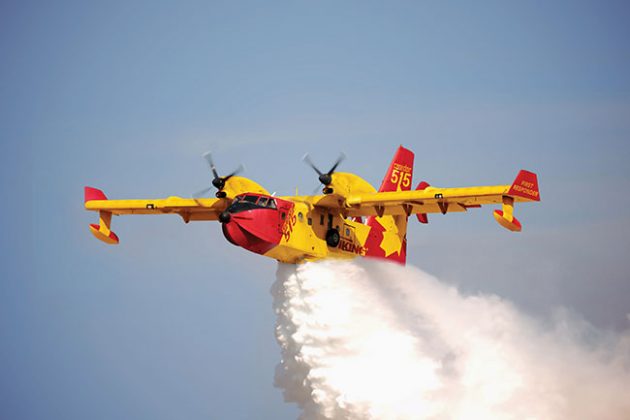 Longview plans to deliver six new CL-515 aircraft to Indonesia in 2024, which will help establish a full production platform for the aircraft. (Image: Longview Aviation)

Fixed wing
In an ASVE session called Continually Raising the Bar, Bradley and Berry worked with the Conair team to produce a 20-miute exclusive video to walk attendees through their facilities. This included an overview of significant investments made to Conair’s unique training centre and also time on the ramp to review highlights of the mighty Avro RJ85 AT airtanker.

With more than 70 aircraft, Conair operates the largest, privately owned, dedicated fleet of fixed-wing firefighting aircraft in the world – covering initial attack, amphibious and land-based needs. The company has modified more than 175 individual aircraft across 15 aircraft types for conversion to aerial firefighting, including its pioneering efforts on jet aircraft. Conair’s operations extend across North America, Europe and Australia.

Just weeks before AFVS began, in late September, Conair’s first Q400AT, engineered specifically for aerial firefighting, touched down at Bundaberg Airport in Australia. The specialized airtanker is on contract with Queensland Fire and Emergency Services to help contain wildfires. In January, Conair purchased 11 Dash 8 Q400 aircraft for conversion to the Q400AT, continuing its commitment to the platform.

In addition to the Q400AT’s enhanced fire suppression capabilities, which includes the aerial dispersion of retardant, suppressant, or gel products, Conair points to its environmental performance in terms of setting a standard for future next-generation aircraft. The newest generation of the de Havilland Q400 turboprop provides composite propulsion with advanced swept blade propeller design, efficient lift systems, effective aerodynamics, and a light but robust frame, which, explains Conair, contribute to lower emissions, fuel burn and noise.

Conair explains its specialized Q400 airtanker produces 30 per cent less emissions than aircraft of similar size, exceeding current environmental standards for carbon dioxide (CO2), hydrocarbon, nitrous oxide and smoke emissions. With results that are below levels mandated by the International Civil Aviation Organization (ICAO), the aircraft also offers the lowest fuel burn per litre hauled. The Q400AT uses only 58 per cent of the fuel, while carrying 88 per cent of the load of a typical Type I airtanker, according to Conair, resulting in less CO2 emissions into the atmosphere.

Conair explains the aircraft’s sustainable features do not come at a cost to aerial firefighting performance, pointing to the Q400AT being outfitted with a custom, purpose-built tank. The team of engineers at Conair designed the tank to deliver a 10,000-litre payload at any Interagency Airtanker Board coverage level, using an advanced, proprietary constant flow Retardant Delivery System (RDS). The tank is equipped with a standard single point filling receptacle on both sides of the tank allowing for a 2,250 litre per minute fill rate from either side of the aircraft.

With a loaded cruise speed of 360 knots at up to 18,000 feet, Conair notes the Q400 is the holder of three climb-to-time turbo-prop records. The company explains this fast climb to cruise time results in reduced block time from base to fire and return. The aircraft is designed for both Initial Attack as well as Support Actions, offering tactical flexibility, with a take-off run requirement of 1,396 metres when loaded, regardless of density altitude. Conair also points to the Q400AT’s turboprop speed control, capable of consistent drop speeds even in steep, rugged terrain and diverse geography. To enhance its firefighting performance, the Q400AT flight deck is equipped with a Conair-developed and Transport Canada-certified Flight Envelope Awareness System, which provides pilots with enhanced safety information, such as instantaneous G-Loading, slow-speed awareness and angle of attack detail, along with flap configuration over-speed awareness.

Conair’s land-based airtanker fleet also includes the Avro RJ85 AT, Convair CV580, and Air Tractor AT 802. Bradley during the AFVS event spent time on Conair’s ramp describing the unique tanking system of the four-engine RJ85 AT. In addition to its strong short field performance, the RJ85 features dispatch speeds in excess of 380 knots and a Maximum Take-off Weight of 97,000 lbs and a Maximum Tank Capacity of 11,355 litres (3,000 US gallons). The aircraft holds a drop speed at 120 knots.

The other key tenant at YXX, Cascade Aerospace, an operating unit of IMP Aerospace & Defence, shares similar qualities of Conair in terms of being a global leader in the modification of specialized aircraft. While not exclusive to aerial firefighting like Conair, Cascade in late-2018 became the homegrown choice of Longview Aviation to serve as the initial conversion lead for its Viking CL-415EAF Enhanced Aerial Firefighter program.

Longview describes the CL-415EAF as the next generation of the world’s only purpose-built aerial firefighter and multi-mission amphibious platform. (See Wings magazine May/June 2020 for more on the CL-415EAF program and its CL-515 platform scheduled for first delivery in 2024). Longview with its subsidiary Viking Air based in Victoria, BC, in April 2020 delivered the first CL-415EAF to Bridger Bridger Aerospace Group in Bozeman, Montana, in advance of the 2020 North American wildfire season. Bridger signed a purchase agreement – valued at $204 million – for six such aircraft back in May of 2018.