AgustaWestland is celebrating the centenary of the formation of the Westland Aircraft Works in Yeovil and the many aeronautical achievements that have been made during 100 years of continuous aircraft manufacturing on the site. Established in 1915 Westland has produced many famous fixed wing aircraft designs such as the Whirlwind, Welkin, Wapiti, Lysander before focussing on helicopter production and later on its own designs such as the Lynx and AW101. In 2001 AgustaWestland was formed with the bringing together of two great names in aviation and since 2004 has been wholly owned by Finmeccanica. In 2007 Agusta celebrated its centenary and now in 2015 Westland has achieved the same historic aviation milestone. 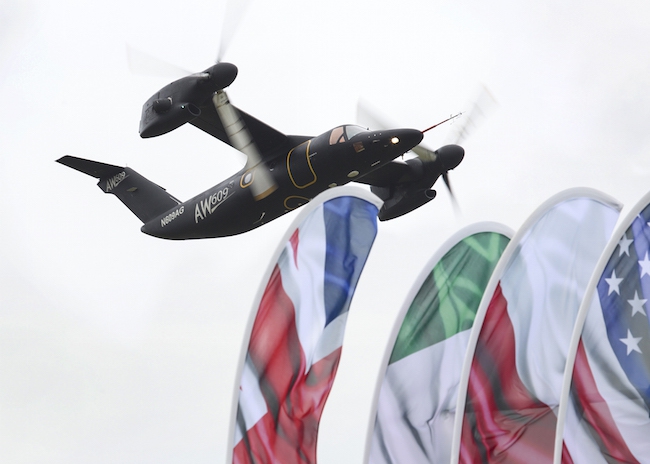 Today, 100 years after building the first Short Type 184 seaplane, the Yeovil factory is at the very forefront of rotorcraft technology – designing, developing and manufacturing the latest generation of rotorcraft for military and commercial applications. Yeovil is currently home to final assembly lines for the Super Lynx 300, AW159 and AW101 heli¬copters as well as the new generation AW189 civil helicopter. It is also the main provider of helicopters to the UK Ministry of Defence (MoD) and delivers Integrated Operational Support (IOS) and training services for the MoD’s Apache AH Mk.1, Merlin, Sea King and AW159 Wildcat helicopter fleets.

Finmeccanica-AgustaWestland also makes a significant contribution to the UK economy with more than 3,200 employees based at its Yeovil site which in turn support a further 6,800 jobs in the supply chain. It also is an award winning employer that actively supports education and skills development in schools and colleges, and offers an exciting range of graduate, undergraduate and apprentice opportunities for those wanting to be part of the company’s future aeronautical achievements.

In April 1915 the Petter brothers, who had a thriving engineering business in Yeovil, made the decision to offer their com¬pany’s manufacturing re-sources to the Government to help the war effort. The Admiralty contracted them to build Short 184 seaplanes under li¬cence with work starting immediately. Thus ‘Westland Aircraft Works’ was officially formed as a branch of Petters Ltd, beginning one hundred years of aviation history.

Designed by Short Brothers Ltd as a torpedo-carrying seaplane, the Short 184 was the first aircraft to be built at Westland Aircraft Works in Yeovil. The aircraft’s structure was typical of the period; a wire-braced, wooden box frame with the fuselage and wings covered in fabric. Produc¬tion of the Short 184 began in July 1915 and the first aircraft was com¬pleted in December 1915. It was dis¬mantled and taken by horse and cart to Yeovil Junction from where it went by rail to the River Hamble for testing. By the end of the first World War pro¬duction had included types such as the DH9A light-bomber and the Vick¬ers Vimy twin-engined heavy bomber.

The Interwar and Experimental Age

The demand for military aircraft sharply decreased after the war, so Westland began to design civil air-craft. Flying was still a dangerous ac¬tivity, as the war had hastened aircraft development by necessity. Designers and engineers could now focus on improving the safety and airworthi¬ness of their aircraft. Civil luxury was sought after in the aircraft of the inter¬war period, advancing the designs of enclosed cockpits, passenger cabins and pushing aircraft to look sleeker, fly higher and go faster. Many fixed wing aircraft types were designed and built during the interwar period included the Widgeon, Wessex, Wapiti and Pterodactyl.

In 1933 a Westland aircraft became the first to fly over Mount Everest. The Houston Mount Everest Expedition aimed to prove that a British aircraft with a British crew could fly over the highest point on earth and use the opportunity to contribute to scientific knowledge by photographing inacces¬sible and dangerous terrain. Two ex¬tensively modified Wapitis, known as the PV.3 Houston-Westland and PV.6 Houston-Wallace, were altered to cope with the severe conditions. The first flight successfully achieved the summit and a second flight, against orders, achieved the Expedition’s sci¬entific goals. The Times called this ‘a magnificent piece of insubordination’ and the pilots were reprimanded by the Royal Air Force for their breach of conduct but were then awarded the Air Force Cross.

During World War II, Westland and its dispersal sites were wholly con¬cerned with aircraft production, unlike the previous war in which munitions had also been manufactured. The Supermarine factory at Southamp¬ton was destroyed by the Luftwaffe in 1940, crippling production of the Spit¬fire leading to Westland becoming a major centre for Spitfire and Seafire manufacture and repair, with over 2000 of these aircraft passing along the production lines and many more being repaired.

Another famous aircraft design produced by Westland during the war was the Lysander, which gained fame for its use by the Special Operations Executive to drop off and retrieve agents or stranded allied aircrew in France. The Westland Whirlwind and Welkin fighters were also produced and Westland’s last fixed wing aero¬plane, the Wyvern, saw service with the Royal Navy after the war.

From Fixed Wing to Helicopters

In 1946 the Westland Board made the decision to focus entirely on heli¬copters. That bold decision was not taken lightly given helicopters at that time were rare and had very lim¬ited capabilities. Westland initially produced Sikorsky designs under licence, benefiting from the US tech¬nological lead instead of following the fledgling industry in Britain, but soon developed in-house design exper¬tise. Later, the British aerospace in¬dustry was encouraged to rationalise by Government policy and Westland acquired the aircraft manufacturing interests of Fairey Aviation Ltd and the helicopter divisions of the Bristol Aeroplane Co and Saunders-Roe. The early helicopter types built such as the Dragonfly and Whirlwind saw service with the UK armed forces and export customers and were followed by the larger and more capa¬ble Wessex and Sea King helicopters.

In 1971 the Westland Lynx took to the skies and in 2015 the much updated Super Lynx 300 remains in production. In 1986 a specially modified Lynx, serial G-LYNX, took the Helicopter World Speed Record with a speed of 249.10 mph/ 400.87 km/h over a course on the Somerset levels. Nearly 30 years on this record remains unbroken despite several at¬tempts by other manufacturers.

Collaboration between Westland and Agusta in the 1980s produced the EH101, a world leader in its class, it is currently in service in diverse roles from SAR to Head of State/Government Transport with customers around the world. Today the EH101 has evolved into the AW101, which incorporates the latest technology and integrated mission equipment.

In 2006 a contract was signed with the UK Ministry of Defence for the development and manufacture of Future Lynx which was later renamed the AW159 Wildcat. It was the first fully digitally designed helicopter to be produced by AgustaWestland and first flew in November 2009. Coincidently the very first aircraft to be handed over at the Yeovil site in 2015 was an AW159 Wildcat to the Royal Navy, one hundred years after the Royal Navy accepted the very first aircraft built by Westland in 1915.

AgustaWestland in the UK Today

In recent years the Yeovil site has expanded its involvement in commercial helicopter programmes, in particular with the AW Family of new generation helicopters which comprise the AW139, AW169 and AW189. The AW189 is the first civil aircraft to be built in Yeovil since the mid-1980s, whilst rotor blades and transmission systems are manufactured for all three members of the AW Family of helicopters.

In 2015 Finmeccanica-AgustaWestland’s Yeovil site is at the very forefront of the rotorcraft industry and at the heart of UK advanced manufacturing, building some of the world’s most advanced military and commercial helicopters for customers around the world. AgustaWestland in Yeovil is the home to several ‘centres of excellence’ that are designing and manufacturing the very latest rotorcraft rotor & transmission systems and integrating complex avionic & mission systems.