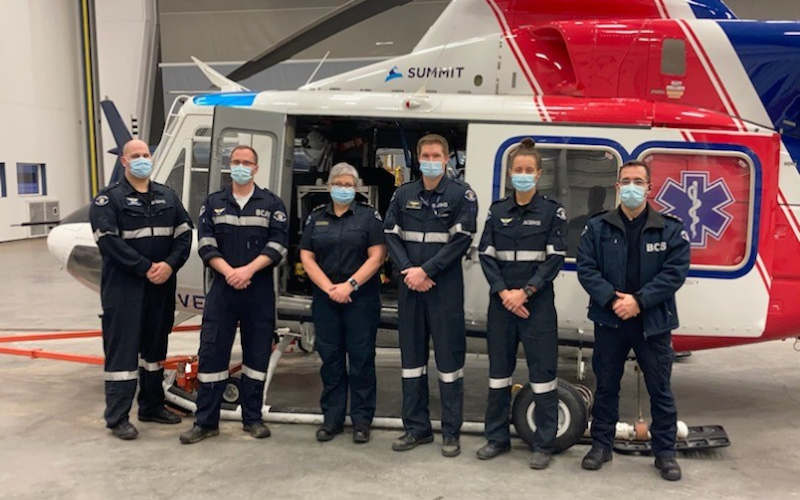 A new air ambulance helicopter is now stationed at the Prince George Airport.

The craft quickly proved its worth when last Sunday, a day before the service’s “official launch,” it was flown to Terrace to pick up a patient. What would have been a 6 1/2-hour trip by ground took a “significantly faster” two hours by air, according to B.C. Emergency Health Services.

It complements two fixed-wing aircraft, also stationed at the airport, and will usually be used for shorter flights of less than 240 kilometres that typically make up about 30 per cent of BCEHS transports by air.

As well as carrying patients from community to community, it can also be deployed to accident scenes on the region’s highways. So-called 911 emergency calls make up about 10 per cent of the workload, according to BCEHS.

“However, that just means it’s often quicker to have our ground crews arrive on scene, treat and stabilize a patient and then meet an air ambulance at the local health facility to be transported for further treatment,” a BCEHS spokesperson said.

Because the chopper is based at the airport, ambulance personnel still need to be on hand to carry the patient to the University Hospital of Northern B.C.

In September, and just prior to the provincial election, the government said a concept plan to build a new surgical tower at UNHBC had been approved. There was no indication the tower would include a rooftop helipad; UNHBC is the only major hospital in the province without one. There had been one at the hospital until the late 1990s, when it was deemed unsafe.

Meanwhile, BCEHS said a third fixed-wing aircraft is to be added to the fleet in 2021.

The helicopter is operated by Summit Helicopters and the planes by North Cariboo Air and Northern Thunderbird Air.