On the 12th of April 1968, the first Fenestron took to the skies on the second prototype of the Gazelle. It has since become emblematic of Sud Aviation, Aerospatiale, Eurocopter and now Airbus helicopters with the H160 carrying this sound-reducing, safety-enhancing technology into the next generation of rotorcraft. 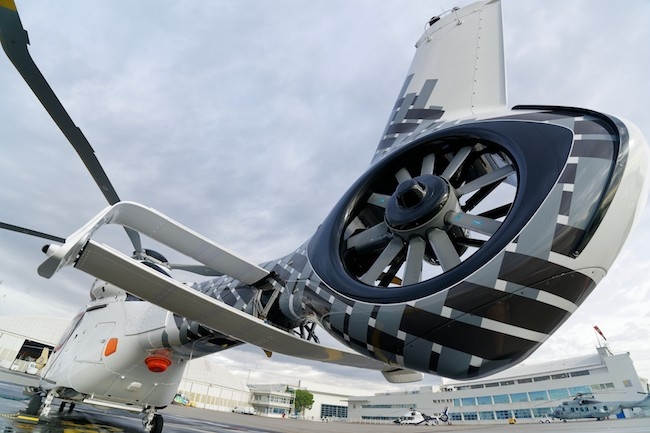 The idea behind shrouding the tail rotor was initially developed to provide additional safeguards for workers on the ground but also to protect the tail rotor in forward flight and in complicated operational environments, such as working around high-voltage power lines. Sound reduction benefits followed after much research and optimisation from one generation of the Fenestron to the next.

Originally called the “Fenestrou”, which is Provençal for “little window”, the term evolved into the renowned Fenestron. It was first certified on the Gazelle in 1972 and then subsequently integrated into the first single-engine Dauphin prototype, whose first flight was in June 1972. Trials were then conducted with a seven-tonne Puma in 1975, however, with its diameter of 1m60 and its 11 tail rotor blades it required too much power for the Fenestron to bring an operational advantage on this class of helicopters.

The second generation came at the end of the 1970’s with an all-composite Fenestron, which increased the diameter of the new Dauphin’s Fenestron by 20% up to 1m10. This improvement was motivated by the U.S. Coast Guards’ requirement for a highly manoeuvrable aircraft for Search and Rescue operations. The U.S. Coast Guards aircraft are still in service today and have accumulated more than 1.5 million flight hours.

In the meantime, research continued to optimise the shape of the Fenestron, blade foils, and to improve sound reduction, especially during certain phases of flight. Between 1987 and 1991 it was successfully tested on an Ecureuil, the prototype of which is still on display at the entrance to Airbus Helicopters’ headquarters in Marignane.

In 1994, the 3rd generation was fitted onto the H135 and optimized sound levels by using an uneven setting of the blades. In 1999 the H130 performed its maiden flight with a Fenestron derived from this version. The H145 followed suit in 2010.

50 years on, the H160 possesses the latest and largest Fenestron to be built on an Airbus helicopter with a diameter of 1m20. The fact that it is canted to 12° allows for improved performance with an additional payload and increased stability especially at low speed. With the H160 out to conquer the medium twin market, the Fenestron will be one of Airbus Helicopters’ signatures in the skies for decades to come.