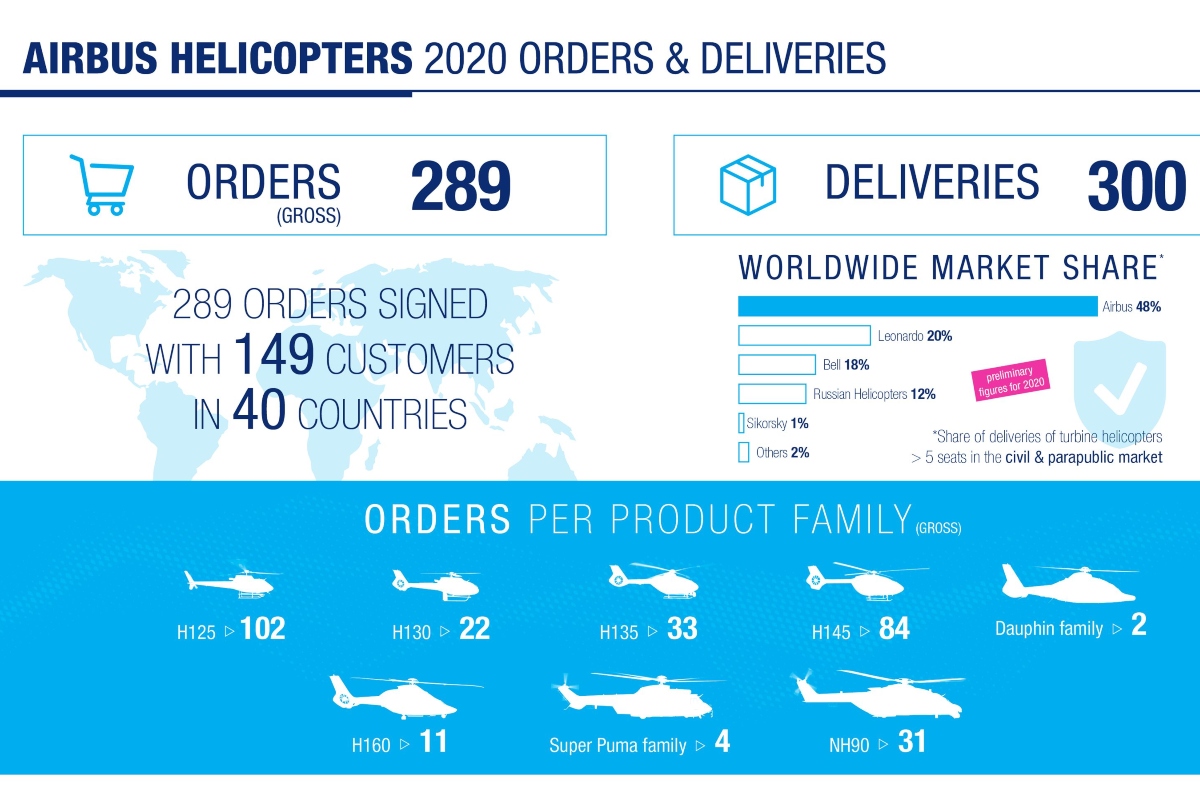 In 2020, Airbus Helicopters logged 289 gross orders (net: 268) in a challenging market heavily impacted by the economic consequences of the COVID-19 pandemic, reinforcing the company’s position on the civil and parapublic market.

Additionally, Airbus delivered 300 rotorcraft worldwide resulting in what the company states to be a 48 per cent share of the civil and parapublic market.

“I am proud of our teams all over the world who adapted their ways of working to be there for our customers when they needed us the most, striving to help them to maintain their essential missions across the globe by delivering helicopters and the associated support and services they required,” said Bruno Even, CEO, Airbus Helicopters, in a statement.

Key deliveries in 2020 included the first five-bladed H145 to launch customer Norsk Luftambulanse, a helicopter emergency medical services operator, at the end of September, followed by deliveries to DRF Luftrettung at the end of the year. On the heavy side, the first H225Ms were handed over to the Kuwait Air Force as well as the first NH90s for the Spanish Air Force. September also saw the 463rd delivery of an UH-72A Lakota from the Airbus Helicopters factory in Columbus, Mississippi.

Order highlights for 2020 consist of 84 helicopters for the H145, including 17 UH-72B for the U.S. Army, the first Fenestron and Helionix-equipped versions to be ordered.

The H135 achieved solid sales with 33 units and also received the EASA certification of an alternate gross weight as well as a new single pilot IFR cockpit layout at the end of 2020. Milestone Aviation and Heli-Union both became new customers for the multi-mission H160, ordered to address a wide range of missions including offshore transportation.

The NH90 had a successful 2020, explains Airbus, with the Bundeswehr placing an order for 31 naval helicopters to replace the ageing Sea Lynx fleet due to be retired. The French Armament General Directorate (DGA) confirmed the development of a new Standard 2 version to equip the French Special Forces and the first NH90 for Qatar performed its maiden flight at the end of the year.

On the customer support and service side, Airbus states there was a strong showing for HCare support contracts, with new customers joining the ranks such as the National Aeronautics and Space Administration (NASA) and Air Methods Corporation.

In 2020, innovation milestones for Airbus included the first fully automatic flight of CityAirbus, a demonstrator that, according to Airbus, will play an important role in developing zero-emission flight and in preparing the future urban air mobility market. The VSR700, the company’s rotary-wing unmanned aerial system, performed its first free flight in July and autonomous deck-landing trials at the end of the year.