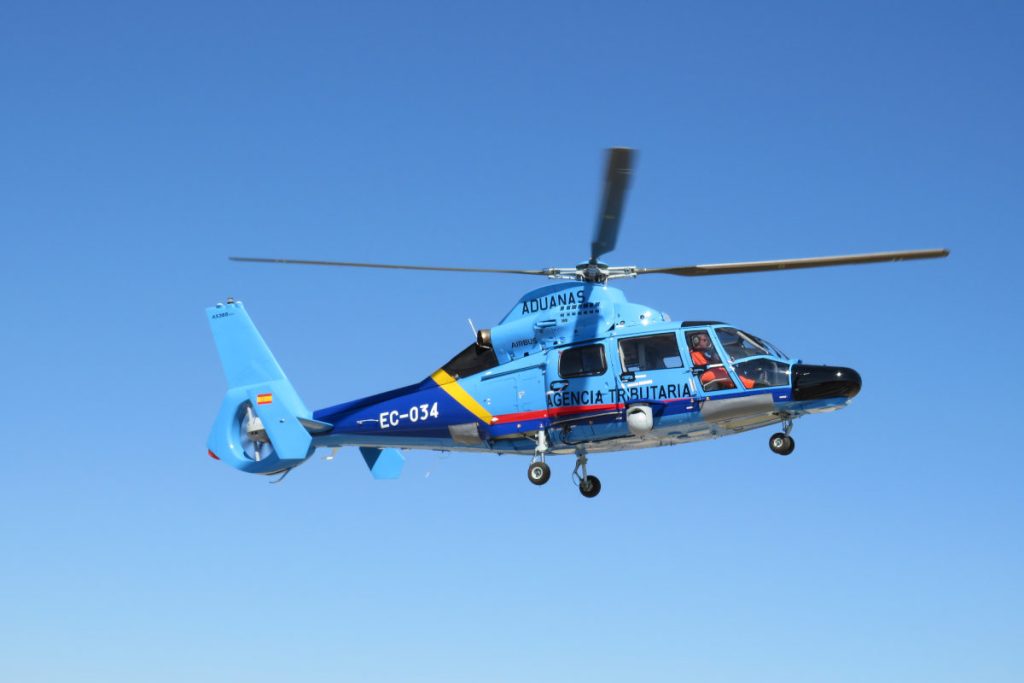 In 2021, Spanish Customs’ three Dauphin helicopters, each flying close to 1,000 hours in a year, contributed to the seizure of more than 200 tons of illegal drugs in Spain. (Photo: Aduanas Agencia Tributaria, Spain, Airbus)

Airbus delivered the last Dauphin helicopter, an AS365 N3, to the Spanish Customs Service. This helicopter will reinforce the Customs Surveillance Service’s capacity to combat drug trafficking in the Strait of Gibraltar, the Alboran Sea and in Galicia.

The helicopter was customized at Airbus Helicopters’ facilities in Albacete, Spain, featuring mission equipment like as an electro-optical system, radar, tactical communications system and search light. Most of the Spanish Customs Service’s patrol flights take place at night.

Its new Dauphin AS365 N3 is also integrated with long-range fuel tanks, providing the capability to fly up to three hours and 30 minutes. It can reach a fast cruise speed of 145 kts, which Airbus notes as being an essential asset when reaching the vessels of drug traffickers.

The Spanish Customs’ three Dauphins perform maritime patrol missions to track, chase and intercept high-speed smuggling boats typically transporting contraband. In 2021, the Dauphin helicopters contributed to the seizure of more than 200 tons of illegal drugs in Spain, working with the Custom Service’s 45 vessels and land units. 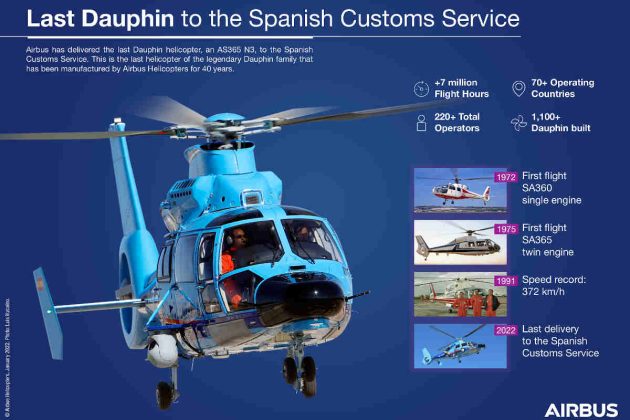 “The Spanish Customs has been a longstanding partner since 1985 and we are very proud of how, since the first Dauphin was handed over to them in 2002, these helicopters have carried out essential tasks for the population such as the fight against drug trafficking in a hostile environment,” said Fernando Lombo, Managing Director of Airbus Helicopters in Spain. “Thank you to the women and men at Customs who are taking full advantage of the Dauphin’s marine patrol capabilities, flying the outstanding figure of almost 1,000 hours a year with each Dauphin to protect our community.”

Airbus explains this is the last helicopter of the legendary Dauphin family that has been manufactured in Marignane by Airbus Helicopters. Over the past 40 years, more than 1,100 helicopters have been produced, flying seven million hours in 70 different countries. Among its numerous milestones, the achievement of the world speed record in November 1991 stands out, notes Airbus, when the Dauphin reached 201 kts on a 3 km route.