Airbus Helicopters, the French Defense procurement agency (DGA – Direction générale de l’armement) and the French Navy marked the handover of the 15th NH90 NFH multimission naval helicopter, the first to be delivered in the final radar configuration (FRC), during a ceremony held in the facilities in Marignane. 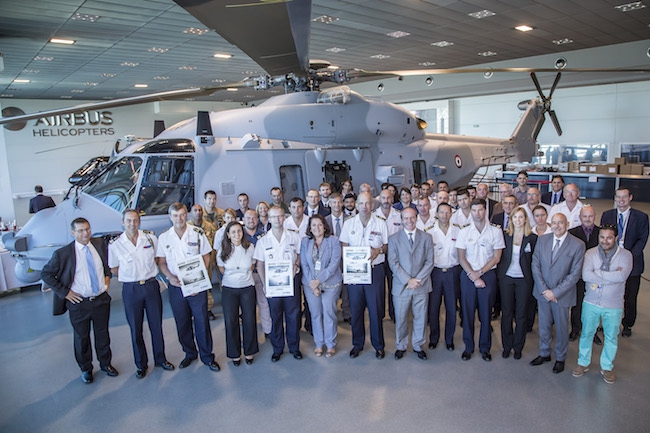 The naval version of the NH90 is designed to perform a wide range of missions from anti-submarine, to anti-surface warfare, search and rescue, maritime surveillance and control and special operations including counter terrorism and anti-piracy. The NH90 in its final radar configuration includes also an advanced sonar providing the Navy with improved submarine detection and classification capabilities, as well as a new system for the Digital Map Generator (DMG) facilitating mission preparation and execution.

The NH90’s 4-axis autopilot and the fly-by-wire controls contribute to safety and maximum flight performance in severe operating conditions. The NH90 is the first serial helicopter in the world to be equipped with fly-by-wire technologies, significantly reducing pilot workload and allowing for this state-of-the-art helicopter to be piloted with ease.

To date, 249 NH90 have been delivered to 13 countries and have logged over 95,000 flight hours, confirming its success on the export market.

The twin-engine, medium-size NH90 helicopter program is managed by the consortium NHIndustries, a company owned by Airbus Helicopters (62.5%), AgustaWestland (32%), and Fokker (5.5%).