The twin-engine multipurpose helicopter H145 has successfully proved its operational capabilities for challenging offshore missions. During a two-day flight trial in late January the established offshore operators Wiking Helikopter Service GmbH and HTM Offshore were able to test the H145 in all the relevant fields of offshore operations. Both aviation companies collaborate closely to offer their customers a wide range of offshore services involving light and heavy helicopters. This concept is very appreciated in the offshore-wind-branch. 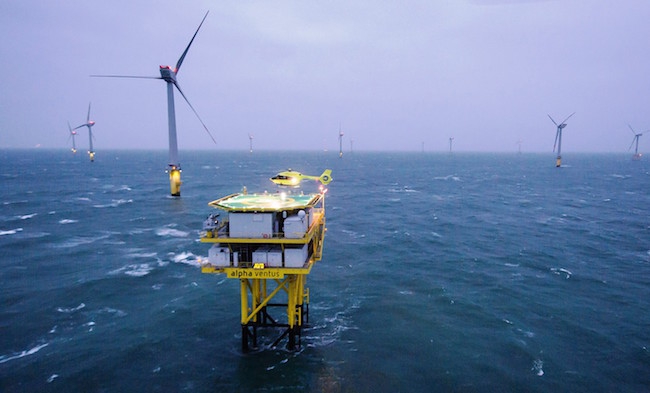 “One of our main activities is the transfer of harbour pilots via helicopter in any kind of weather conditions  24/7,” explains Lars Hilgert, chief flight coordinator at WIKING. “Harbour pilots navigate ships safely in and out of German harbours. In most cases these pilots are brought onto the moving ships using the winch. This process requires the utmost attention of the helicopter’s pilot and crew,” he added. “We are very positively surprised with the intuitive Helionix cockpit of the H145 and its 4-axis autopilot with auto-hover function. These systems contribute to the helicopter’s high levels of safety in every scenario. At the same time the workload of the crew is reduced, allowing them to safely accomplish their mission even in the harshest of weathers,” Hilgert adds.

The rotorcraft is also well-suited for Helicopter Emergency Medical Services (HEMS). “Our rescue helicopters are constantly on stand-by for offshore HEMS. Every unit is staffed with a doctor and an assistant and ready to embark on a mission in a minimum amount of time. The H145 would qualify perfectly for these missions, given that it features tremendous levels of performance and a spacious cabin”, explains Alexander von Plato, Managing Director at WIKING Helicopter Service.

The flight test programme also included other missions such as approaching the wind park alpha ventus in the German Bight, landing on the transformer platform and hoisting technicians onto the offshore wind turbines. All while sustaining winds of up to 50 kts, the H145 delivered a convincing performance.

“HTM Offshore is specialised in the transfer of service personnel in the wind industry,” says Bernd Brucherseifer, Managing Director at HTM Offshore. “The technicians are increasingly used for scheduled and unscheduled maintenance missions on wind turbines, for instance if the turbine is not, or hardly accessible by ship due to rough waters. With wind parks emerging increasingly further away from the coastline we are reliant on a versatile but also efficient helicopter fleet. The H145 would be an ideal addition to our 11 Airbus Helicopters H135, as it can carry more passengers and travel for longer distances. Despite its spacious cabin the main rotor has a very small diameter, making it perfectly suited for approaching wind turbines.”