Airbus Helicopters recently celebrated the 150th delivery of the H145, the newest member of the BK117/EC145 family. 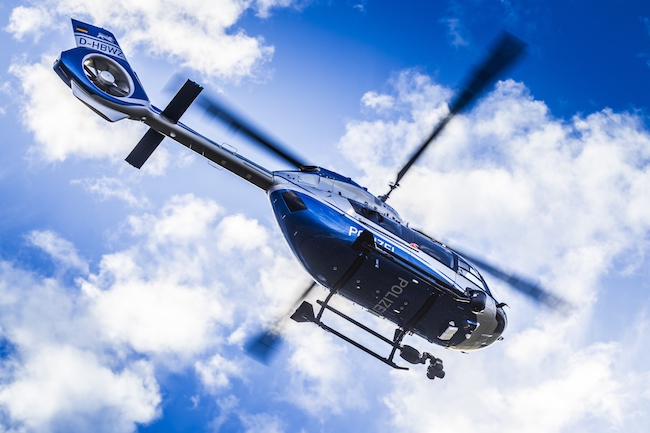 In October 2017, Helicopter Travel Munich (HTM) received the 150th H145 helicopter from Airbus, to be used for offshore hoist operations and the transfer of service personnel working in the wind turbine industry.

The H145 (formerly EC145 T2) is a member of the EC145 and BK117 family, more than 1,400 aircraft of which have been delivered to date, notching up over 4.8 million flight hours in some 21 countries worldwide. Used mainly for EMS, air rescue, law enforcement and aerial work, the BK117/EC145 family has also been successful with military utility operations and training, with over 400 Lakota UH-72s delivered to the U.S. Army.

The H145 version was conceived as a platform with unparalleled mission abilities, a high level of flight safety, economic operating costs, and a tailored support and service package, while incorporating Airbus innovations.

The result: a helicopter able to deliver exceptional performance in a diverse range of roles.

In law enforcement, customers like the police of Baden-Württemberg have dedicated their H145 fleet to their most challenging missions. The H145 does duty both day and night with a night vision goggle-compatible cockpit, while its advanced mission management system, together with high-end police equipment, defines a new standard in airborne law enforcement.

While the H145 has become a mainstay with police forces, it also made its mark in the offshore industry, as evidenced by HTM’s acquisition. HTM is not alone; in 2016, Wiking Helikopter Service GmbH – which services wind farms and performs North Sea missions – did business with Airbus for the first time—opting for the H145. In 2017, they added a second H145 to their fleet.

In its offshore configuration, the helicopter can transport up to eight passengers and offshore equipment, including an external life raft system. Due to its low operating cost compared to useful load, it holds the distinction of best price in its class per passenger and mile for offshore transportation.

In addition, an optional health and usage monitoring system contributes to the aircraft’s flight safety and availability through predictive maintenance. Customers get these features in real time thanks to the helicopter’s built-in connectivity.

Today, the H145 has achieved 80,000 flight hours since entry-into-service. Among customers of the “ready for duty” four-tonne helicopter, the Babcock Group is its largest operator, with a fleet of 27 H145s, while Germany – where the H145 found its first and now, its 150th, home – is its largest market, with 30 H145s in operation.