A quieter and more fuel efficient future for rotorcraft flight was unveiled by Airbus Helicopters Monday with its Bluecopter demonstrator, which has validated leading-edge technologies ranging from an advanced Fenestron, improved rotor and airframe design to intelligent engine power management. 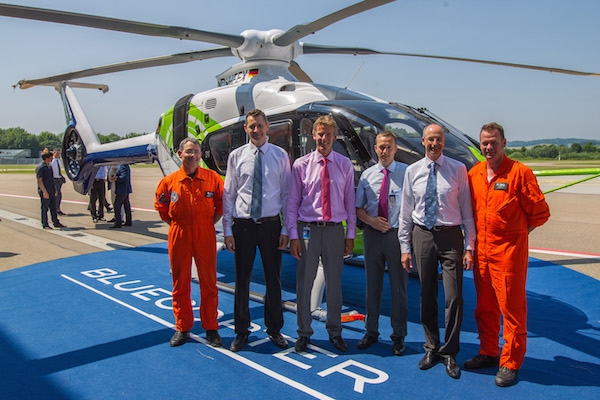 In the more than 28 flight hours logged during evaluations performed throughout its operating envelope, Bluecopter has confirmed the feasibility of Airbus Helicopters’ advancements in eco-friendly helicopter design while also proving the company’s next-generation eco-efficient technologies.

Using one of the company’s light medium twin-engine rotorcraft as the demonstrator platform, Bluecopter incorporates transversal technologies that can be applied across Airbus Helicopters’ product line. The aircraft made its public debut today during a presentation at Airbus Helicopters’ Donauwörth, Germany facility.

“By bringing together the best of our company’s innovation, we are opening the way for a new generation of rotorcraft that will have lower noise levels, burn less fuel and are more efficient to operate,” explained Marius Bebesel, Program Manager Research & Innovation in charge of the Bluecopter demonstrator. “With Bluecopter, we have met our goals of decreasing fuel consumption by as much as 40 percent, significantly reducing CO2 emissions, and lowering noise to approximately 10 decibel effective perceived noise
(EPNdB) below ICAO noise certification limits, while raising the maximum payload and the passenger comfort.”

Airbus Helicopter’s signature Fenestron is further evolved on Bluecopter, with additional performance improvements from the shrouded tail rotor achieved through optimized blade and stator designs. The acoustic liner integrated in the Fenestron’s shroud and the active rudder on the tail fin contributes as well to the reduced noise footprint of the Bluecopter.

To achieve the ambitious targets in reducing CO2 emissions, a dedicated engine power management is implemented. During cruise the Bluecopter can be switched to an “eco-mode” by shutting off one engine. The remaining engine operates more efficiently and the fuel consumption is drastically reduced. The “eco mode” is based on an automatic control system that assists the crew and ensures safe operation of the aircraft.

The demonstrator features several measures to reduce aircraft aerodynamic drag, including fairings for the main rotor hub and the landing skids, a newly developed aft-body concept and the use of a specially-designed empennage with a T-tail horizontal stabilizer.

The eco-friendly approach is extended even to the attractive paint scheme of the Bluecopter, which was realized using the latest water-based paint technologies.

The Bluecopter development has been accomplished in the frame of a short-term skunk works project, largely covered by company self-funding. Certain technologies integrated into the demonstrator were developed in the framework of Europe’s Clean Sky joint technology initiative and Germany’s LuFo-IV research program.