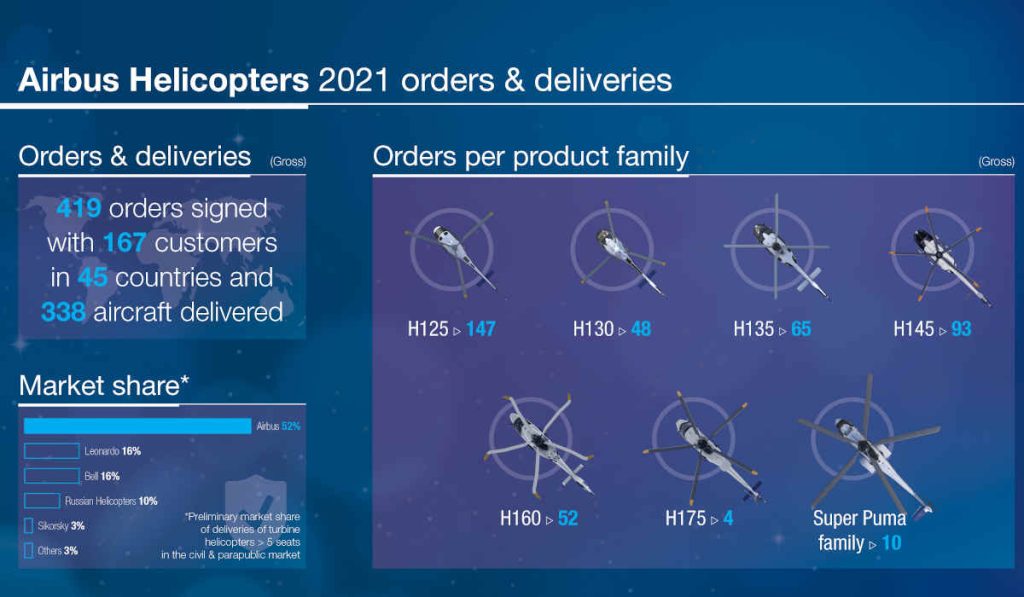 The 2021 increase in orders for light helicopters, H125 and H130, reflects the recovery of the civil and parapublic market, explains Airbus, which saw strong momentum from its home countries, with France ordering 40 H160s (civil and military versions), eight H225Ms, and two H145s; Spain ordering 36 H135s; and Germany procuring eight H145s for the Bavarian police force.

Deliveries increased from 300 in 2020 to 338 in 2021, contributing to Airbus Helicopters’ preliminary 52 per cent share of the civil and parapublic market, where it states company claims to be the market leader. In number of aircraft units, Airbus Helicopters recorded a net book to bill ratio above one.

“2021 was a year of major commitments for Airbus Helicopters,” said Bruno Even, Airbus Helicopters CEO. “We committed to developing new products and services that fulfil our customers’ requirements such as launching the development of an innovative H160M for the French armed forces’ joint light helicopter program and creating the new service package HCare Classics for customers that operate our legacy helicopters.”

Even also points to the 2021 delivery of the first ever H160 to Japanese operator All Nippon Helicopter. “It is our duty to innovate and to pioneer sustainable aerospace and to that end we have begun implementing the use of sustainable aviation fuel and pursued our urban air mobility journey with the unveiling of CityAirbus NextGen,” he added. “I’m proud of our teams that have worked hard to deliver all of these achievements.”

Airbus notes it ramped up five-bladed H145 deliveries in 2021, as well as delivered the first five-bladed H145 retrofit to DRF Luftrettung, a German helicopter emergency medical services operator, at the end of May. Other key 2021 deliveries outlined by Airbus include the first H225M for Singapore in March, as well as the first H225M in a naval combat configuration for Brazilian Navy, and the first NH90 TTH for Qatar, which was delivered ahead of schedule. In North America, the U.S. Army took delivery of the first UH-72B from the Airbus Helicopters factory in Columbus, Mississippi, and the Lakota fleet reached the milestone of one million flight hours.

Airbus explains order highlights for 2021 consist of 93 H145s and 52 H160s, including the first batch of H160Ms for the French armed forces as well as 10 H160s for the Gendarmerie Nationale – the first law enforcement customer for the model. Airbus Helicopters also expanded its partnership with The Helicopter Company in Saudi Arabia, which added 20 H145s and six ACH160s to its growing fleet of Airbus helicopters. The H225 helicopter began 2021 with long-standing customer, the Japan Coast Guard, ordering an additional two such aircraft to its fleet in March.

Airbus Helicopters also points to 2021 successes with its suite of HCare offerings, which saw Air Methods sign an additional contract in February to cover 80 EC135s. Airbus expanded its HCare range in 2021 with HCare Classics, a custom-made set of services for its legacy fleet of approximately 2,000 in-service H120, Dauphin, Puma and Gazelle helicopters. The company also points to HDataPower as an example of its ongoing commitment to digitalization.

In terms of product development, Airbus Helicopters points to the H125 performance increase receiving both its EASA and FAA certification enabling operators to take full advantage of the 10 per cent power increase provided by the Arriel 2D engines. The company also added the H175M to its military product portfolio. The VSR700, Airbus’ unmanned aerial system, began its flight envelope expansion ahead of sea trials later this year.

Airbus notes 2021 was especially instrumental to its decarbonization roadmap. The helicopter Flightlab started flight testing new technologies, including the engine back-up system which aims to deliver safety improvements but is also described by Airbus as a fundamental first step on the road to hybridization. Airbus Helicopters also launched a SAF User Group dedicated to the rotary- wing community in an effort to accelerate the deployment of biofuels, began using sustainable aviation fuel for its training and flight tests at its main sites in France and Germany, and ended the year by flying an H225 with one engine powered by 100 per cent SAF.

In September 2021 at the Airbus Summit, Airbus Helicopters also unveiled CityAirbus NextGen, its new prototype designed to deliver zero emissions flight in urban environments. The fully electric vehicle for the Urban Air Mobility market is one of the reasons Airbus Helicopters is looking to recruit 500 people in 2022.