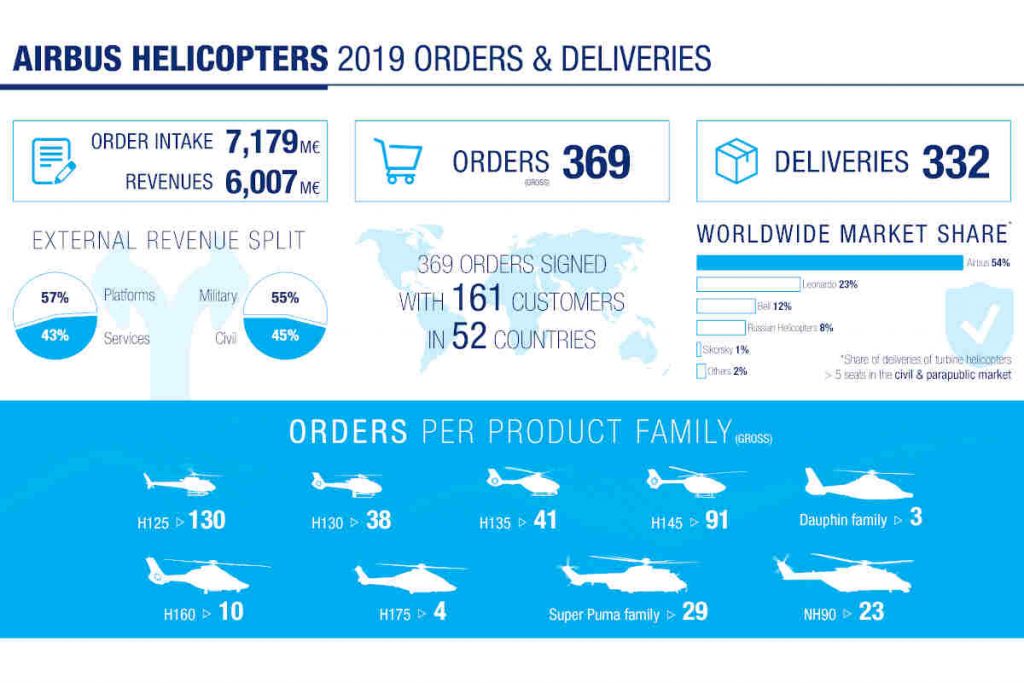 Based on its 2019 results, Airbus states that it maintains a lead in the civil and parapublic market with a 54 per cent market share in terms of units. (Illustration: Airbus)

Airbus Helicopters reports that it logged gross orders for 369 helicopters in 2019 (310 net orders), combined with its support and services revenue, worth more than €7 billion ($10 billion in Canadian funds). The company in 2019 delivered 332 rotorcraft, including its 1,000th Super Puma.

With these 2019 results, Airbus states that it maintains a lead in the civil and parapublic market with a 54 per cent market share in terms of units.

On the civil side, Airbus reports had 130 bookings for the H125 helicopter and 91 bookings for the H145 in 2019. Airbus states it also reinforced its position in the military market based on international campaigns such as 23 NH90 aircraft for Spain and 25 H225M mainly for Hungary and Indonesia.

Airbus Helicopters in 2019 also deployed key global support contracts on the military side, including for the NH90 in service in the German Army, as well as Tiger, Cougar and Caracal contracts in France. The company also points to a five-year extension of the through-life support contract for the Australian Army’s Armed Reconnaissance Helicopter (ARH) Tiger. On the civil side, 250 additional helicopters were covered by global HCare contracts.

“The increased contribution from support and services and key wins in the military sector in 2019 underlines the importance of our robust business model,” said Bruno Even, CEO, Airbus Helicopters. “The balance between our different revenue streams enables us to maintain our global leadership in a challenging civil and parapublic market.”

In releasing its 2019 results, Airbus Helicopters also points to investments in its product portfolio, such as the new five-bladed version of the twin-engine light H145 helicopter to be certified this year. The H125 will be offering a power increase to its customers that will enable them to carry up to an additional 190 kg. The H135 now offers an alternate gross weight that offers its operators an additional payload of 120kg, while the H160 is expected to be certified in the near future.

Airbus Helicopters has also progressed with a military version of the H160, unveiling a full-scale mock-up. The French Ministry of Armed Forces announced that the launch of its Joint Light Helicopter program, for which the H160M has been selected, has been brought forward and will enable the first delivery to be advanced to 2026.

The fully electric CityAirbus demonstrator in 2019 conducted its first flight, as did the prototype of the VSR700 unmanned aerial system that’s designed for military applications.