The Airbus Foundation launched the first Canadian site of its Flying Challenge program, presenting a $45,000 cheque to the Montreal-area initiative, which is designed to interest youth in aerospace. The program is produced in partnership with the Mirabel Youth Centres Association (MYCA) headquartered in the province's aviation hotbed about 60 kilometers northwest of Montreal. 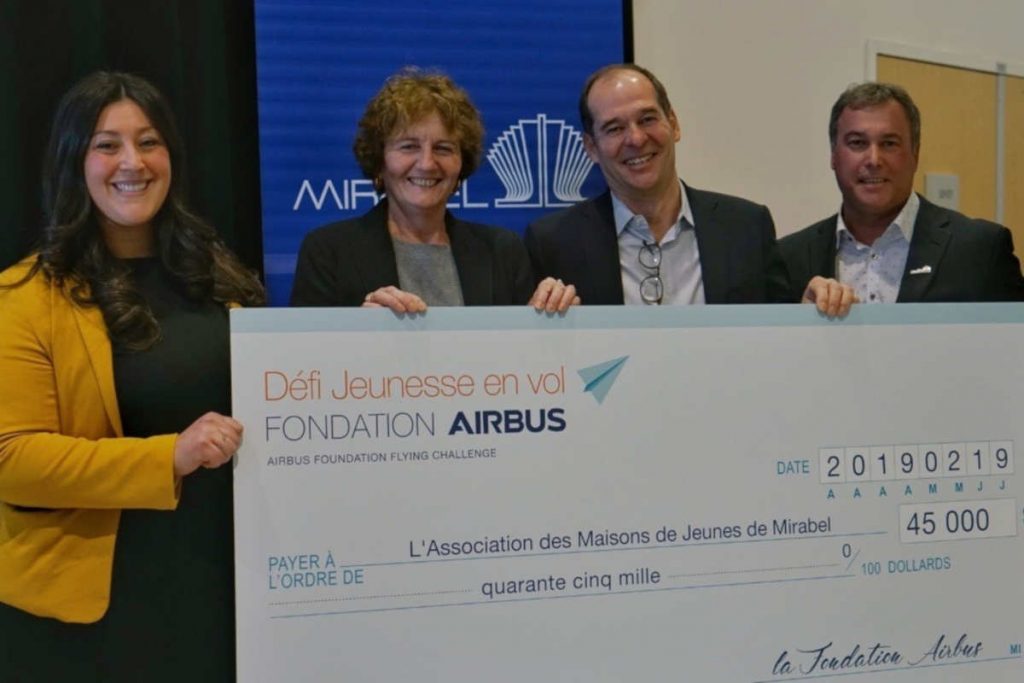 The new program, called the Mirabel Airbus Foundation Flying Challenge, will be managed by MYCA, which operates six youth centres throughout the Mirabel community. MYCA will also lead recruitment of the participants.

“We are sure these fun but very educational STEM activities will inspire some young people to consider seriously what they need to do to pursue one of the many possible careers in aerospace,” said Sabrina Abdeddaim, director general of MYCA.

Running since 2011, Airbus Foundation explains the Flying Challenge has reached more than 4,800 students worldwide and involved over 1,900 Airbus employee volunteers. There are now 17 sites – across seven countries – involved with the Flying Challenge, described by Airbus as the foundation’s flagship program to mentor and engage youth about career paths in aerospace.

“We are very proud to be launching the first ever Airbus Foundation Flying Challenge in Canada here in Mirabel, next door to the A220 partnership headquarters,” said Philippe Balducchi, head of Airbus Canada and CEO of the A220 Partnership.

“The Flying Challenge offers a fantastic opportunity to A220 employees to engage with young people from our local community,” continued Philippe, “by providing them with support and inspiration on their educational journeys.”

Organizers of the initiative have planned three key events for year one, including tours of the Airbus A220 final assembly line in Mirabel, École nationale d’aérotechnique (ÉNA) in St-Hubert, and the Cosmodôme in Laval. The Quebec-based Flying Challenge program will also organize conferences and workshops, including STEM (science, technology, engineering and math) activities.

MYCA has three different programs to promote the well-being of youth in the municipality of Mirabel, with the ultimate goal of integrating youth into the labour market. It operates six youth centres in Saint-Augustin, Saint-Benoît, Saint-Canut, Saint-Hermas, Saint-Janvier and Sainte-Scholastique. MYCA also operates the Travail de rue à Mirabel (TRAM) program with two youth workers and the Projet CJT (Coopératives jeunesse au travail).