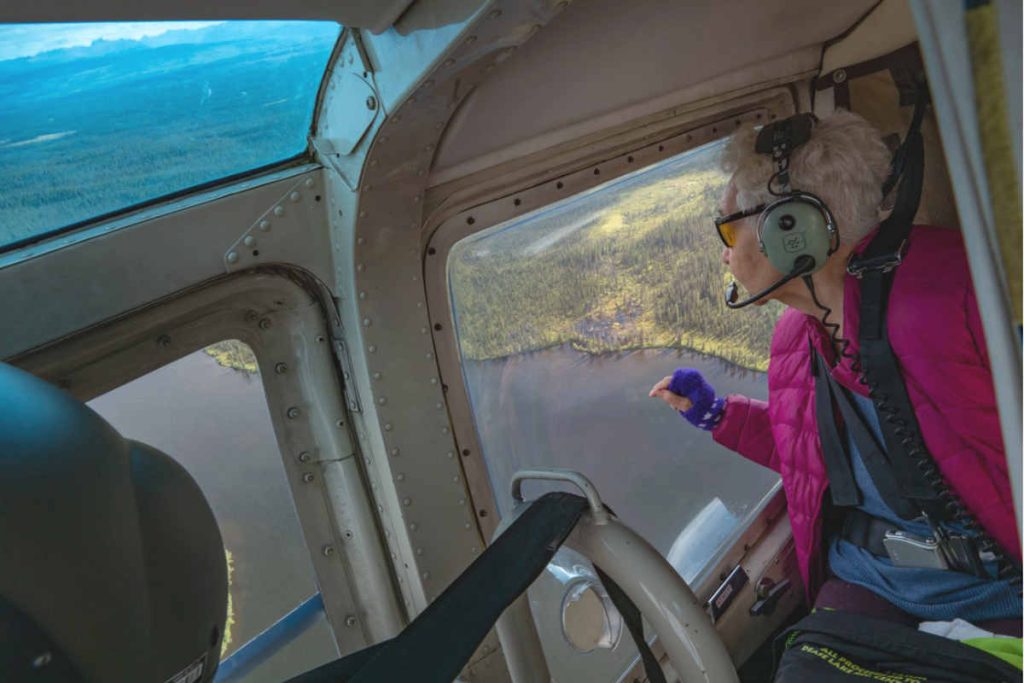 Tahltan elder Verna Callbreath had never imagined she would see the place she was born and childhood home ever again.

Then last summer she held her hand over her heart as the helicopter lowered to give her a view of her parents’ cabin in a remote inaccessible portion of Tahltan territory in northwest British Columbia.

Now run down, eroded and captive to overgrown bushes and weeds, Callbreath and her family left behind that home and moved away in search of food and a better life when she was a teenager.

Callbreath, who now lives in Dawson Creek, was among 10 Tahltan elders treated to a helicopter ride to revisit remote locations on the traditional territory they once occupied.

The Aerial Elder Interviews project is part of a knowledge gathering exercise conducted by the Tahltan Central Government (TCG) to verify information it has in archives from the 1980s, said Sandra Marion, the director for the TCG’s Culture & Heritage Department.

“We ask our elders where they were born and grew up and it’s a very respectful process with majority of the interview guided by the elder itself because we don’t want them to feel like they’re like being interrogated while they’re out there,” she said.

The elders are given full control of what they want to share with the team said Marion, especially since there are a lot of emotions involved.

Marion’s team collaborated with Geographic Information Systems (GIS) analysts and relied on archives to track some of the places which may not be called the same names today or show up on Google Maps.

For instance, when Callbreath told them she lived in a place next to Fish Lake, the team’s search led them to three to four places with the same name. They verified it against archived oral information obtained through previous elder interviews and arrived at a spot near Prairie Lake that best matched the description.

“We put her [Callbreath] in a helicopter with her granddaughter and told her, if you don’t recognize it, you can come back and we’ll figure it out,” Marion explained.

Luckily for Callbreath, it was the right place.

The purpose of the project is to build a working relationship with the elders and continue to build on it from previous work that they’ve done with them, Marion said.

So, in part, the project is about reuniting Tahltan elders with parts of the territory they haven’t been able to see or visit after leaving, she said. And secondly, it reaffirms preexisting information about Tahltan lands that encompass roughly 11 per cent of B.C.

“In this regards, we are solidifying our stories and our knowledge of areas… this strengthens the fact that we have always been here in our territory, using and occupying the land,” Marion said.

In future, this information will also aid the TCG in land use and development plans.

A long-discussed project, Marion’s team was able to finally flag it off last year thanks to a funding stream dispersed through the Tahltan Stewardship Initiative.

It was halted briefly after an uptick of COVID-19 cases in the area, but they intend to restart the program once again in summer this year.

“We’re hoping to get as many elders out onto the land as possible during our next flying season,” said Marion, adding, there are approximately 350 elders in the nation.