Features Military Procurements
And the Winner is…

The name for Canada’s new shipborne helicopters – the Cyclone – is the most suitable monicker the Department of National Defence (DND) could have chosen, considering the whirlwind of controversy that has battered the project since its inception.

The name for Canada’s new shipborne helicopters – the Cyclone – is the
most suitable monicker the Department of National Defence (DND) could
have chosen, considering the whirlwind of controversy that has battered
the project since its inception. Moreover, the tempest shows no sign of
abating even though the government has finally made a selection.

Subject
to completion of detailed negotiations, Sikorsky Aircraft Corporation
will be awarded two contracts: one to supply 28 of its H-92 helicopters
equipped with a General Dynamics mission systems suite, and the other
to provide maintenance support for an initial 20 years. Total value of
the package is estimated at $5 billion, $1.8 billion for the aircraft
and $3.2 billion for the follow-on work. 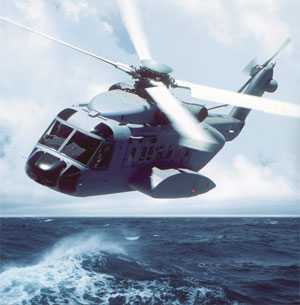 The other finalist in
the competition – the Anglo- Italian EH101 built by AgustaWestland,
doing business as Team Cormorant in collaboration with Boeing Canada
for mission systems – evidently also met all operational requirements
but was beaten on price by the American company. A third bidder,
Lockheed Martin Canada, which had put forward NHIndustries’ NH90
helicopter with an LMC missions suite, was dropped from the competition
last December with only the explanation that it was was not compliant
with DND requirements.

The need for new maritime helicopters to
replace Sikorsky CH-124 Sea Kings, which began entering service in the
early 1960s, was first identified in the late 1970s. It was refined as
the New Shipborne Aircraft project through several stages until the
Progressive Conservative government of Brian Mulroney announced in July
1992 that it had ordered 50 aircraft, some for shipborne deployment and
the rest as replacements for the military’s fleet of twin-rotor Boeing
Vertol CH-113 Labrador search-and-rescue (SAR) helicopters, now fully
retired from service.

In a bid to contain costs, Mulroney’s
short-lived successor, Kim Campbell, reduced the order to 43 aircraft
in August 1993. Three months later, immediately after the Liberals
returned to power, the new prime minister, Jean Chrétien, made good on
an apparently impromptu election campaign promise and abruptly
cancelled the contract. It was December 1997 before the Liberals, in a
politically embarrassing move, found themselves having to approve the
purchase of 15 Cormorant SAR helicopters, effectively the same aircraft
Chrétien had summarily rejected. Then, even though cabinet finally
approved the acquisition of shipborne aircraft in late summer 2000, the
project effectively was moribund until the announcement last December
that Sikorsky and AgustaWestland were the finalists.

Only three
days after his July 20 appointment as defence minister, Bill Graham
officially announced that Sikorsky had prevailed; but it was left to
senior officials to explain details of the tortuous process.

Asked
why the H-92 was chosen over the EH101 even though some of the latter’s
capabilities were understood to be superior (Sikorsky insists that its
aircraft is better “in just about every sense”), Alan Williams,
assistant deputy minister (materiel), replied that the competition was
based on the final Statement of Operational Requirements (SOR) signed
off by DND in mid-1999. “They specified exactly what they thought they
needed for this helicopter and the system,” he said, suggesting that
DND wasn’t about to pay for supposedly “superior” elements it didn’t
need for maritime helicopters.

The Sikorsky, he insisted, is
“the right helicopter to meet the needs of the Canadian Forces at the
best price for Canadians while securing significant industrial and
regional benefits (IRBs) across the country.” Placement of the IRBs is
subject to the ongoing negotiations with Sikorsky.

There have
been allegations, mainly by Team Cormorant, to the effect that DND had
deliberately “dumbed down” the operational requirements so as to give
Sikorsky an edge. Williams, however, was steadfast, saying that the SOR
signed off by DND “remains the benchmark” for the MHP team. “We didn’t
lower the bar! We remained true to our principles.”

More than
400 changes were made to specifications as the project dragged on, but
Williams was adamant that none of the changes had affected the SOR and
that all had enhanced the final specification package. “Sikorsky have
proven to us through their comprehensive and professional bid that they
can provide the platform, mission systems and support apparatus the
Canadian Forces require, at the best price.” The venerable Sea Kings
are to remain in service until at least late 2009 as their replacements
are delivered at the rate of one a month.

However, the ‘cyclone’
of controversy is far from over. Team Cormorant, making good on several
months of threats, has asked the Federal Court of Canada for a judicial
review of the government’s decision. It specifically names Public Works
and Government Services Canada (PWGSC) and Sikorsky International
Operations Inc. The AgustaWestland partnership argues that it should be
given the contract or, failing that, the whole thing should be
re-tendered.

The Team Cormorant office in Ottawa had been
ordered by headquarters not to comment on the case but its
strongly-worded 18-page submission, provided by lawyer Gordon Cameron,
alleges “serious errors” in the government’s bid-evaluation process,
mistakes it says not only favoured Sikorsky but also discriminated
against Team Cormorant.

Even the proposed delivery schedule has
come under attack; Team Cormorant says it is impossible for Sikorsky to
begin delivering Cyclones 48 months after the contract is awarded.
Michel Lapointe, MHP procurement manager at PWGSC, said during the
post-announcement briefing that “should the delivery be tardy there
will be a disincentive of $100,000 a day.” Conversely, “for every day
early in delivery, the contract allows for an additional payment of
$65,000.”

But Team Cormorant insists in its court document that
“Sikorsky knows that it cannot deliver for at least six years and
possibly much longer.” It also says that its American competitor
“deliberately misrepresented its ability and intention to meet the
delivery deadline.” The problem, it explains, is that the H-92’s data
management system, which is being developed by General Dynamics for the
military’s CP140 Aurora long-range patrol aircraft, is “far behind
schedule” already and “this will necessarily delay the H-92.”

Sikorsky,
meanwhile, insists that the first aircraft will be delivered on
schedule. Bruce McKinney, director of business development for Canada
and Sikorsky’s ‘capture manager’ on the MHP, noted in an interview that
there already are civil variants, the S-92, “rolling down our
production line and the same production line is intended to be used for
the Canadian version.” He reiterated the company’s determination to
deliver the first Cyclone 48 months after contract award, “which would
put us probably in the fall of 2008.”