t was a perfect evening for the BC Aviation Council’s 2015 Silver Wings Awards ceremony at the Vancouver Convention Centre this week, with a backdrop provided by the North Shore mountains, Vancouver Harbour and a west coast sunset. As the last Harbour Air and Helijet flights of the day arrived and departed, this year’s honourees were piped in before an audience drawn from all corners of the aviation industry. Once again the evening was emceed by Johanne Wagstaffe, CBC meteorologist, pilot, glider pilot and proud air cadet alumnus. 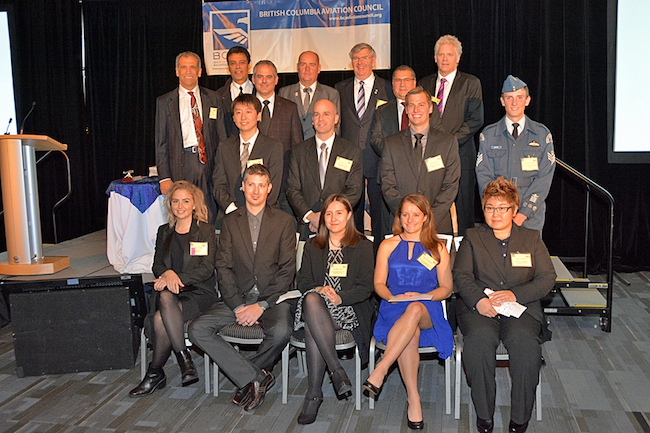 Nathaniel Ralphs, a 17-year-old high school student from Victoria, B.C., was the recipient of this year’s Anderson Family Flight Training Scholarship. The scholarship provides $5,000 to “assist in completing their Private Pilot’s Licence.” The award is actually presented in June, to allow the recipient to put the money to work over the summer. One of the requirements of accepting the scholarship is for the recipient to speak at the Silver Wings award ceremony and give an update on what they have done in pursuing their goals. Ralphs created a very positive impression with his clearly articulated vision of his future. In speaking to the question of how he put the scholarship to work, he brought a chuckle from the crowd when he said that over the past summer he had spent more time at the Victoria Flying Club that he had at home.

This year’s Industry Awards were an all-star lineup and truly represented a Who’s Who of not just the B.C. aviation world, but the Canadian aviation world.