Bell Helicopter has announced the delivery of the first Bell 407GXP to Brazil. The aircraft is outfitted for corporate transport, which continues to be a popular market segment for the Bell 407GXP throughout Latin America. 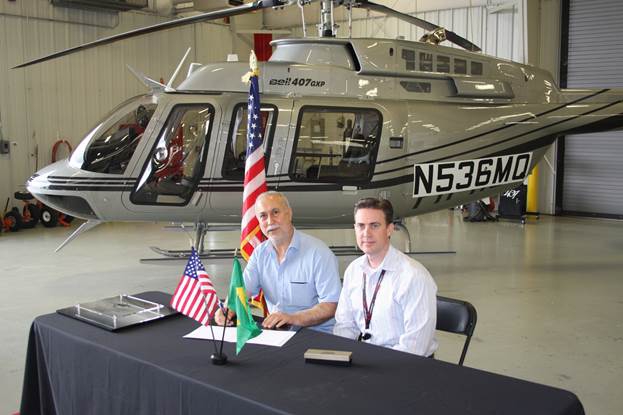 The aircraft was accepted at Bell Helicopter’s facility in Piney Flats, Tenn., by customer Masoud Jafari with Medalhao Persa based in Curitiba, Parana, Brazil and delivered to its final destination on September 3, 2015.

“We are thrilled to be the first in Brazil to receive the new Bell 407GXP,” said Masoud Jafari, owner and CEO of Medalhao Persa. “The luxurious interior, combined with the smooth, quiet performance of the aircraft is exactly what I was looking for to quickly and comfortably conduct business throughout the region.”

“Latin America presents a highly diversified climate for our aircraft, and the Bell 407GXP is consistently praised for its multi-mission capability,” said Jay Ortiz, Bell Helicopter’s vice president of Latin American sales. “The Bell 407 has proven to be a very popular aircraft with over 1,200 flying worldwide today, with particularly strong demand for the upgraded Bell 407GXP from our Latin American customer base.”