Researchers from the U.S. Army Research Laboratory and Bell Helicopter met in June 2018 to focus on the development of micro unmanned aerial systems (UAS). The project surrounds what Bell describes as miniature, lightweight reconnaissance vehicles that soldiers can carry onto the battlefield and deploy in a confined space. 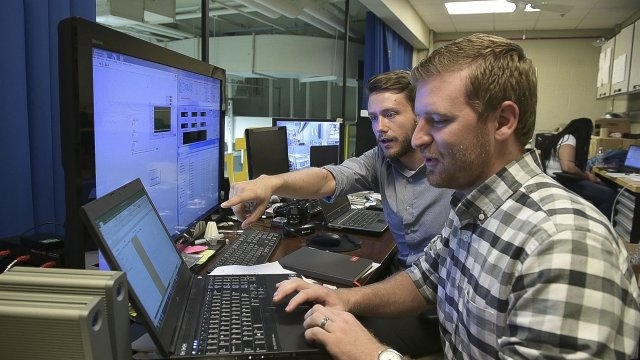 The collaboration began after Bell representatives travelled to Adelphi, Maryland, to attend an open campus event at the U.S. Army Research Laboratory (ARL) in November 2016. After a year and a half of information sharing, the two parties signed a five-year cooperative research and development agreement (CRADA) in March 2018.

“We’re trying to get data on the fundamental level, to build up a knowledge base of vehicles, because their expertise is in designing the vehicles, whereas our expertise is the fundamentals of them,” said Dr. John Hrynuk, a mechanical engineer in ARL’s Vehicle Technology Directorate (VTD). “We want new technology; they want new vehicles. Together, we want to enhance technologies for the soldiers – that’s what makes it the absolute perfect collaboration.”

Bell engineers Dakota Easley and Levi Hefner recently visited ARL to perform experiments on micro UAS using the facility’s wind tunnel. Bell explains the visit was prompted by vehicle control challenges its researchers had observed in early flight testing. With the help of ARL scientists and equipment, according to Bell, the engineers were able to isolate their earlier challenges and improve the performance of the aerial vehicle.

“The wind tunnel here at ARL has been beneficial in providing data that explains why certain things are happening on the control side. Now we’re able to better analyze our tests to enhance the performance of our vehicles,” Hefner said. “This collaboration is great because we’re heading into a new design space with these small vehicles.”