Just when I thought that learning to fly the Sea King was a workout, I flew out to my first ship. My first time landing on a deck would be to HMCS Iroquois, a destroyer, just off the Nova Scotia coast. 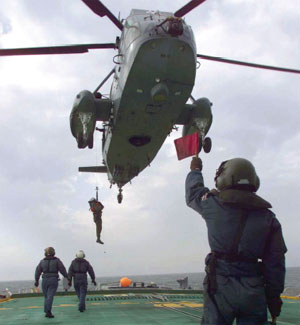 Just when I thought that learning to fly the Sea King was a workout, I
flew out to my first ship. My first time landing on a deck would be to
HMCS Iroquois, a destroyer, just off the Nova Scotia coast. Luckily for
my nerves it was very calm but it was night. Although a newbie like
myself normally makes his first deck landing in daytime, I had to work
within a compressed schedule because three weeks later I was set to
sail on HMCS Montreal as we deployed to Op Apollo. After two haul-down
landings and one free deck landing I was declared operational. In
reality of course, I now knew just enough to not be completely scared
out of my wits when I did go to the ship but would require much more
experience.

It’s
amazing how little of the deck you can actually see as you try to
wrestle 20,500 pounds of 40- year-old helicopter onto this small moving
platform. The Montreal’s deck has the same layout of control measures
as the Iroquois, but being a frigate it is noticeably smaller. Canada
has not had an aircraft carrier since the early seventies and since
then all of our naval air operations have been onboard destroyers and
frigates. We have developed quite an expertise for operating
helicopters off small decks, and special tools like our ‘bear trap’ and
haul-down system.

The Canadian system uses a cable to guide the
helicopter down into a trap that grabs a probe lowered on its
underside. The winch cable attaches through the probe right at the
centre of mass. The maximum tension to be used by the haul-down winch
is calculated by the pilot but limited to 4,000 pounds. If we recover
at 17,500 pounds we would request a maximum hover tension of 3,000
pounds, giving us tension equal to our gross weight. It’s a
choreographed dance with two complex machines floating in full
three-axis motion just feet apart. Control of the deck is overseen by
the Landing Safety Officer (LSO) from a small compartment on the far
right front of the deck.

The helicopter has a main probe and a
tail probe on its underside controlled by the aircrew. The ‘bear trap’
on the ship is a large square trap that moves on a set of rails from
the hangar to the flight deck, pulling the helicopter in or out by its
main probe with the tail probe guiding it for lineup. We start the
helicopter and engage our rotors as per a normal start. Once we are
ready for takeoff the LSO will direct us to raise our tail probe out of
the track, and open the bear trap to release our main probe. The
helicopter is now free on deck and as soon as the deck is steady he
calls “clear takeoff ” which we do as quickly as possible, pulling
enough torque to meet any deck movement. With heavy deck movements
torque can shoot right up to our maximum of 123%; on calmer seas the
takeoff resembles a normal airfield departure. In our theatre of
operation we routinely see torque settings of 97% to hover at our AUW
with the ten knots of wind the ship’s speed gives us. After lift-off we
settle ourselves into a high hover in front of the hangar, still 15
feet from the hangar face. We stay with the ship until the LSO calls
all clear, making sure we are not dragging any cables and that all our
panels are properly closed. Now we can move away, usually straight to
the left side, and we raise our gear as we cross over the edge of the
flight deck and depart into wind.

To recover and land on the
ship, we first wait for the appropriate clearance to approach.We reach
the ‘Delta hover astern’ flying along just to the left and rear of our
flight deck. Once we receive clearance we line up with the marks on the
deck that we call ‘bum lines’ because we line our bums up over them.
These lines give us our fore and aft position. The hangar top and face
have two vertical lines painted on them that give us our left and right
lineup, one for each pilot. There are also three lighted and
gyro-stabilized horizon bars on the hangar top, two for a horizon and
one for pitch. We first move into a high hover to the right side of the
flight deck and lower a cable called the ‘messenger’ to the deck. Our
deck crew takes that cable and attaches it to the cable coming out of
the bear trap. Once they are clear we call “hover tension” which tells
the LSO to dial the winch to 1,500 pounds, providing just enough pull
to centre the helicopter over the trap. We can also call for max
tension to take us right up to our gross weight, making the helicopter
much more stable.