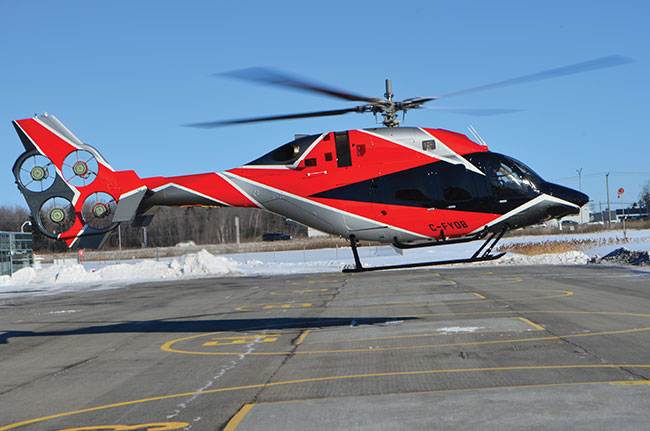 Bell Textron Canada at the virtual International Aerospace Innovation Forum, hosted by Aéro Montreal on December 14, 2020, held the first public display of its Electrically Distributed Anti-Torque system – “an unconventional tail rotor with innumerable opportunities.” A pathway to future hybrid or fully electric technologies for commercial rotorcraft, the system is being developed in Mirabel, Quebec, and is now fully integrated into a twin-engine 429 testbed.

The Electrically Distributed Anti-torque (EDAT) system is one shining result of a $49.5 million investment program initiated by the Government of Canada’s Ministry of Innovation, Science and Industry in mid-2018, through the Strategic Innovation Fund. The funding provided a consortium of 18 industry and academic partners, led by Bell Textron Canada, with means to develop energy-progressive technologies. The collaboration, at the time, was projected to create or maintain more than 300 jobs in Canada and contribute almost $178 million to Canada’s GDP over the next five years.

“EDAT represents what is possible with a shared private-public focus on innovation and green technology, and such investments reinforce Canada’s position as a global aerospace leader,” said Steeve Lavoie, president of Bell Textron Canada, during the December 14 virtual presentation. The company expects the technology will be commercialized in some form over the next five to 10 years, as it prepares to move EDAT from a demonstration phase into an optimization phase.

EDAT is composed of four small fans within a tail rotor shroud in an offset two-by-two pattern. Each of the rotors contains four blades, explains Bell, which are powered by four separate motors with the electrical energy provided through generators driven by turbine engines. Bell explains this design effectively reduces noise and offers lower operational and maintenance costs when compared to an aircraft with a conventional tail rotor. In terms of maintenance ease, cables replace the usual driveshaft and gearbox assembly, reducing complexity.

“It’s not always about blockbuster innovation, but also incremental innovations that improve customer experience,” said Lavoie, hinting at Bell’s potential to leverage the EDAT program for other aspects of the vertical lift sector. The EDAT timeline has been relatively quickly, with testing on the system beginning by mid-2019, about a year after the government’s funding commitment.

“The goal of the project was to mobilize a strong Canadian Innovation Network to focus on five key emerging technologies: Alternate propulsion, autonomy and situational awareness, low-cost fly-by-wire, energy management and advanced anti-torque,” said Michael Thacker, executive vice president of innovation and commercial business at Bell, who also took part in the Aéro Montreal forum. He explained Bell has made progress in all of these areas, particularly testing technologies to support unmanned logistics operations for commercial applications, even as EDAT is the clear testbed highlight. 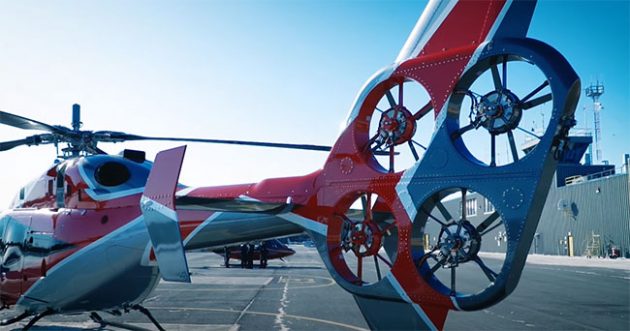 “EDAT explores electrically powered technology for traditional rotorcraft and offers a glimpse into the future of rotorcraft,” said Thacker. “The results of this hybrid-electric aircraft have proven to decrease maintenance, and operating costs, enhance on-the-ground safety, minimize carbon emissions and reduce noise pollution.”

Bell notes EDAT throughout 2020 garnered interest as the first technology of its kind in the rotorcraft industry, challenging industry norms. During Aéro Montreal, Thuva Senthilnathan, Bell Canada’s program manager for commercial development programs, provided a technical overview of the EDAT demonstrator, as he stood in front of the testbed in Mirabel. “As many of you know, on a conventional helicopter, the tail rotor serves to counterbalance the force of the main rotor to provide directional stability to the aircraft on a conventional helicopter, as well,” he explained. “Pilots use their pedals to change the pitch of the blades in the back but can’t change the force applied. Well, EDAT controls work much in the same way. However, instead of changing blade pitch, the pedal position now controls the speed at which the fans are spinning, which in turn changes the thrust applied.”

Senthilnathan continued to describe many potential advantages of commercializing the EDAT system, pointing first and foremost to improved safety, particularly on the ground. “EDAT can be shut off while the main rotor is spinning on the ground, while you’re loading and unloading passengers,” he said. “In addition, you have a certain level of redundancy in the air – if one of the fans malfunctions, you still have the other three to take over.”

Senthilnathan also described the reasons why EDAT presents a lower noise signature when compared to a conventional tail rotor, particularly in forward flight with the fans spinning at lower RPM. “We worked with partners from around the world for the development of this project, from right here in Canada to the U.S. to all the way in Europe with Safran,” he said, describing how the project came to life so quickly and successfully. “Our teams worked extremely hard to go from a paper sketch all the way to a flying aircraft within a year. This type of effort really highlights the innovative spirit that is part of Bell’s culture.”

Development of the EDAT system with flight-test activities and envelope expansion are currently taking place at Bell’s facility in Mirabel, as the company looks to optimize the technology for commercial use. Bell explains it is dedicated to incorporating greener technologies for customers under the parameters of the Strategic Innovation Fund support. The Mirabel facility now stands as one of the vertical-lift industry’s leading operations focused on electric and hybrid-electric capabilities. EDAT will remain at the forefront of these efforts as the company continues to measure its full potential and viable application for future commercial platforms.

“I think it has potential to potentially replace [traditional tail rotors]… There are benefits to the system that the conventional system just does not have innately,” said Eric Sinuas, Bell’s program director for light aircraft, during a November 2020 webinar with Vertical Flight Society. He noted many conventional systems have reached maturity and new disruptive technologies are needed.

“We can successfully say that we have proven the concept. It works,” explained Sinuas. “And now we’re into the phase of optimization, and we’re fine tuning the performance characteristics, pushing the envelope further and really continuing to optimize the system.”