“The men and women that serve in uniform for Canada never fail to answer the call of duty.” 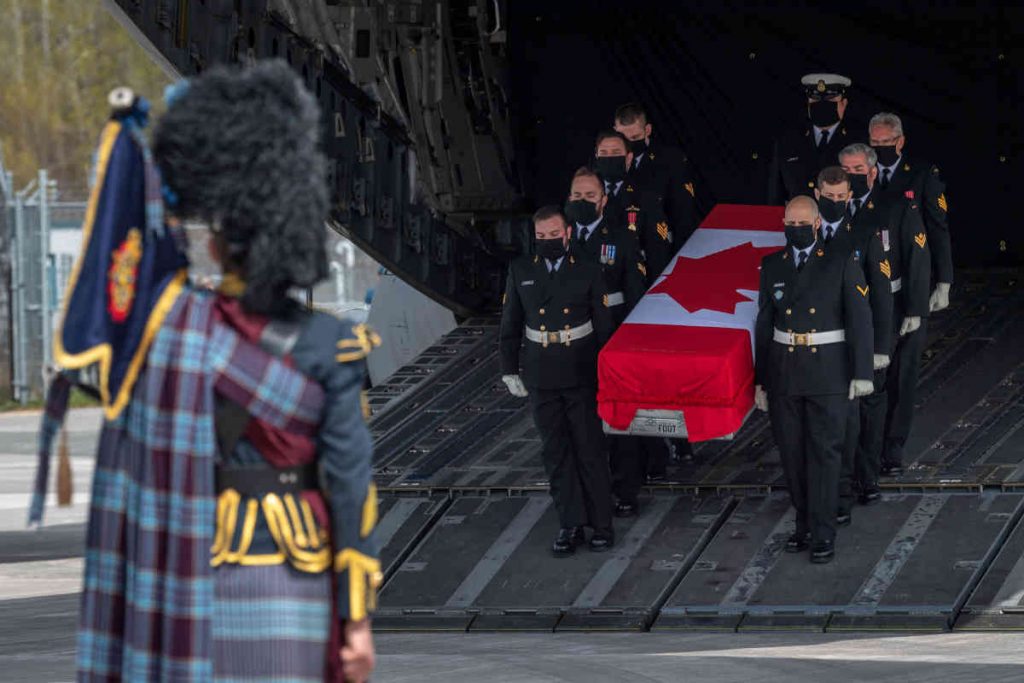 On the afternoon of May 6, a repatriation ceremony was held at 8 Wing/CFB Trenton in Ontario to honour the six Canadian Armed Forces members killed in the CH-148 Cyclone helicopter crash during Operation REASSURANCE.

Canadian Prime Minister Justin Trudeau, Defence Minister Harjit Sajjan and Governor General Julie Payette were in attendance for the ceremony. The CBC reports Trudeau met privately with families before the proceedings began to express his condolences.

Canadians are standing with the grieving families, with the crew of HMCS Fredericton, the members of 423 Squadron and of 12 Wing Shearwater and with all the members of our Armed Forces.
– Julie Payette, Governor General of Canada

The Royal Canadian Air Force’s Cyclone crashed into the Ionian Sea, off the coast of Greece, on April 29 as it participated in NATO exercises with Canadian frigate HMCS Fredericton, on which the helicopter was deployed.

On May 4, the Canadian Department of National Defence confirmed there were eyewitnesses to the accident who were on board the HMCS Fredericton when the helicopter went down. Despite earlier reports of it being further out at sea, the CBC on May 4 reported the Cyclone was just moments away from landing as frigate crew members prepared to receive the helicopter.

The Canadian government also confirmed the cockpit voice recorder and flight data recorder from the CH-148 were recovered, which will be analyzed in Ottawa to determine what caused the crash killing all six service members aboard.

The crash happened in a part of the Ionian Sea with depths of approximately 3,000 metres, making recovery of the helicopter difficult. The Canadian military would need to enlist the resources of other armed forces or private operators to recover the helicopter.

The body of Sub-Lt. Abbigail Cowbrough was recovered shortly after the crash. The Department of Defence notes other remains have been found, but has yet to identify them. On May 3, Cowbrough’s casket was draped in a Canadian flag as members of HMCS Fredericton held a disembarkation ceremony in Taranto, Italy, to honour the six fallen service members.

A CC-177 Globemaster brought Cowbrough back to Canada for the May 6 repatriation ceremony at 8 Wing/CFB Trenton. By this time, a spontaneous memorial had been formed by the public at 12 Wing Shearwater, where the 423 Maritime Helicopter Squadron is based in Nova Scotia’s Halifax Habour.

The repatriation ceremony paid tribute to the six Canadian Armed Forces members killed in the helicopter crash, including:

Julie Payette, Governor General and Commander-in-Chief of Canada, shared the following tribute to the victims:

There are no words that can express the sorrow and pain of losing a loved one. Today, we grieve the loss of six members from the Canadian Armed Forces. They perished in the crash of their CH-148 Cyclone Helicopter Wednesday afternoon during a training exercise off the shores of Greece.

Our heart goes out to their families and to all those who are affected by this tragic accident. It is even more tragic, so soon after last week’s horrific shooting that it is Nova Scotia and Halifax, their home base, who are asked to bear this burden again.

Today, Canadians are standing with the grieving families, with the crew of HMCS Fredericton, the members of 423 Squadron and of 12 Wing Shearwater and with all the members of our Armed Forces.

The men and women that serve in uniform for Canada never fail to answer the call of duty. They are doing so right now here in the homeland helping with the fight against the virus, and they do so abroad strengthening alliances and protecting our liberties.

We owe them and their families an immense debt of gratitude. I hope they can all find a bit of comfort in knowing that the entire nation shares their loss.