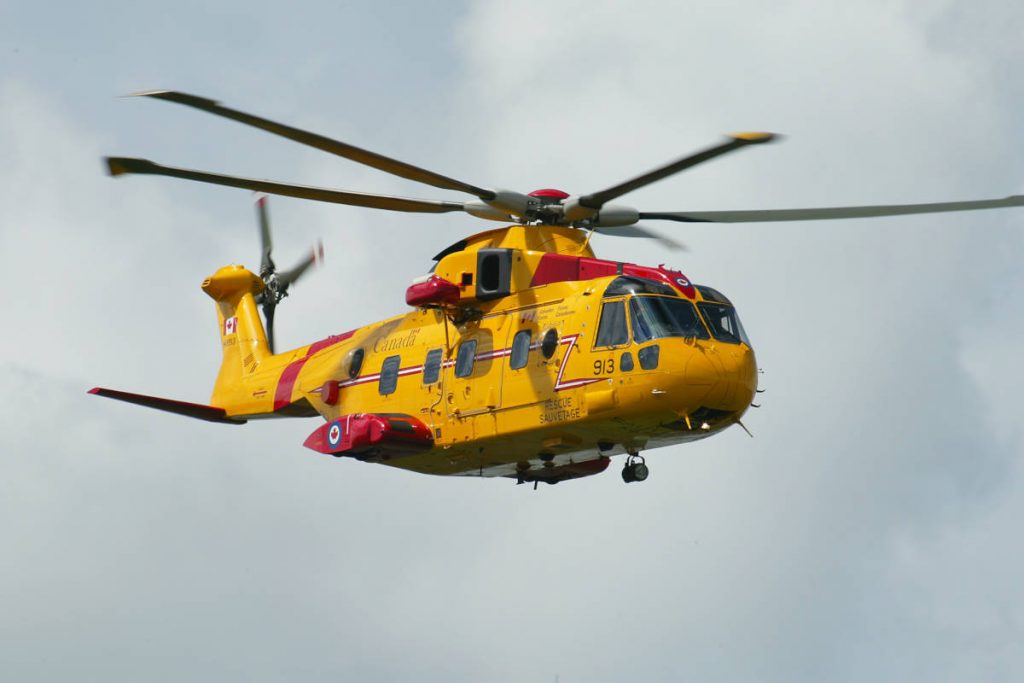 Canada’s CH-149s will be upgraded to the AW101-612 design with new avionics, glass cockpits, and more powerful digitally controlled engines, among other improvements. (Photo: Leonardo)

Canada’s Defence Minister Harjit Sajjan, in Comox, BC, on August 22 provided more details surrounding investments being made into country’s search-and-rescue fleet of CH-149 Cormorant helicopters. The Government of Canada originally outlined its intent as part of its Strong, Secure, Engaged defence policy and, in May 2018, committed to proceeding with the CH-149 Cormorant Mid-Life Upgrade Program (CMLU).

Sajjan announced Canada’s search-and-rescue (SAR) fleet will receive at least two additional helicopters, while the existing fleet will be upgraded to extend its life to at least 2042. As previously announced, this work will be conducted with Leonardo S.p.A. in partnership with IMP Aerospace and CAE. Canada’s Industrial and Technological Benefits Policy applies to this project, which requires the primary contractor, Leonardo, to undertake economic activity in Canada equal to the value of the contract.

“For every dollar Leonardo will receive as part of this contract, the company will invest one dollar back into our economy,” said Navdeep Bains, Innovation, Science and Economic Development Minister. “This will ensure the company will continue to be a key contributor to our economic growth, creating more jobs for Canadians and spurring innovation.”

The Cormorant Mid-Life Upgrade project is valued at up to $1.39 billion, with Leonardo serving as the CH-149 Cormorant’s original equipment manufacturer and IMP Aerospace the in-service support contractor. CAE will deliver Canada’s first AW101 full motion simulator and other synthetic training capabilities. GE Canada will provide the new engines and Collins Aerospace will provide new cockpit displays and avionics.   Within the CMLU program, Canada’s CH-149s will be upgraded to the AW101-612 design, which is the helicopter model recently procured by Norway for its SAR missions. Using an established configuration is expected to accelerate the project considerably, while training and related infrastructure will also be acquired.

Back in 2005, CH-149s from the RCAF’s Trenton, Ontario, operating base were redistributed to 9 Wing Gander, 14 Wing Greenwood, and 19 Wing Comox. Now, with the addition of at least two CH-149s to the fleet, Cormorants will return to Trenton and replace CH-146 Griffons in the SAR role.

The government states the CH-149 Cormorant helicopter provides a capability that allows SAR crews to conduct operations in areas not accessible by other helicopter fleets, making the upgrade and enhancement program of critical importance. “Canadians rely on the women and men of the Royal Canadian Air Force to conduct successful search-and-rescue operations in challenging circumstances,” said Sajjan. “These enhancements to the CH-149 Cormorant fleet will ensure that search-and-rescue crews have the right equipment to continue providing these life-saving services.”

The RCAF has a responsibility to maintain a SAR response capable of reaching those in distress anywhere in Canada on a 24/7 basis. “Every year, the Royal Canadian Air Force flies about 1,000 missions in support of search and rescue, a core mission of the Canadian Armed Forces,” said Lieutenant-General A.D. Meinzinger, Commander of the Royal Canadian Air Force. “These upgrades to the CH-149 Cormorant, and an increase in fleet size ensures the RCAF will continue to deliver search and rescue services in the challenging Canadian environment.”