What the RCAF gains in Canada’s 20-year Defence plan 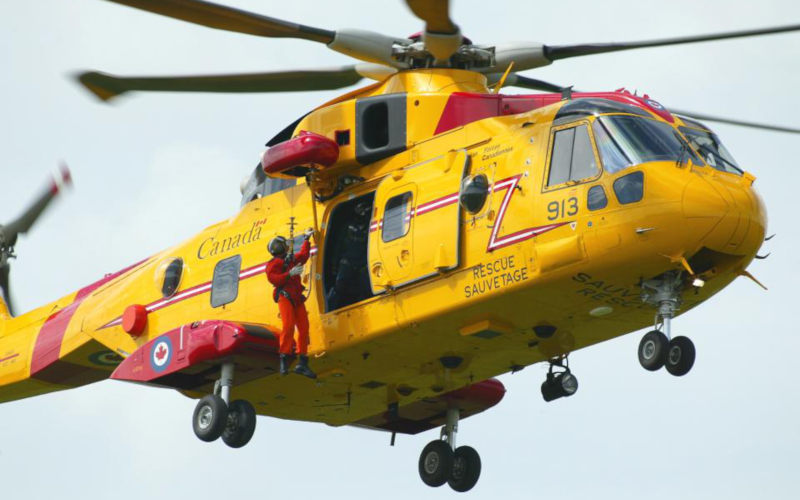 Since its introduction into service in 2002, the CH-149 Cormorant has successfully carried out a number of SAR missions in Canada and its challenging weather conditions. (Photo: Leonardo)

A few straightforward statistics – among mountains of convincing data available to be pulled – describe Canada’s need for its historically aggressive Strong, Secure, Engaged policy first introduced in mid-2017 for the Canadian Armed Forces. This includes the pending, marque procurement of a new-generational fighter fleet, given the age of Canada’s current CF-188 Hornets first procured in 1983.

What’s more, the Canadian Armed Forces (CAF) pegs its responsibility as covering an area greater than 15 million square kilometres. Statistics from the Department of National Defence (DND) indicate approximately 600,000 aircraft enter and exit Canadian air-space annually, among some 4.3 million total flights, including 90,000 transpolar flights. There are 800,000 ship movements annually within Canadian waters, according to DND, and more than 8,000 search-and-rescue call outs per year.

At the Canadian Aerospace Summit held in Ottawa in mid-November 2018, Brigadier-General Michel Lalumière shared these statistics on the opening slide of his presentation to members of the Aerospace Industries Association of Canada, along with succinct words about the importance of the Royal Canadian Air Force (RCAF): Canada’s defence and security depends on air power – Geography determines; history proves it.

From search and rescue (SAR) missions and disaster response to NORAD cooperation and NATO commitments, the RCAF in terms of spending allocation will be the biggest benefactor of Strong, Secure, Engaged (SSE) among all branches of the CAF.

By 2024/25, defence spending in Canada will grow to 1.4 per cent of GDP, while the expenditure on major equipment will also reach 32 per cent, exceeding the NATO target of 20 per cent. These near-term projections are largely based on the timeline of CAF’s Future Fighter Capability Project, targetting a commitment to acquire 88 advanced fighter aircraft with first deliveries anticipated in 2025.

SSE is now organized under the government’s Defence Investment Plan, which was made public for the very first time in late May 2018 by Defence Minister Harjit Sajjan. For continued transparency, the Investment Plan will be refreshed annually and approved by the Treasury Board every three years.

RCAF investments
The 20-year plan for the RCAF with new investments alone will reach $46.5 billion, which accounts for 49.4 per cent of the CAF’s total spend of $93.9 on capital projects. This will be focused on what is described as 52 critical equipment, infrastructure and information technology projects. There are some discrepancies in the numbers with SSE being introduced in 2017 and the Investment Plan launching in 2018. The latter document pegs total spending on capital projects at around $107.9 billion, when also including services and goods, with $47.2 billion earmarked for the RCAF.

The majority of SSE spending on capital projects, when categorized by asset class under the Investment Plan, is earmarked for equipment, accounting for approximately $76.9 billion, followed by what the government labels as “other” at $14.1 billion; IM/IT at $12.1 billion; and infrastructure at $4.9 billion.

As BGen Lalumière explains, the scope of SSE has developed a need for expansive Request for Proposals, including the first draft sent out in October 2018 for the Future Fighter program, inviting Boeing, Dassault, Eurofighter Jagdflugzeug GmbH, Lockheed and Saab to participate in the process. The formal RFP for Canada’s Future Fighter program is expected to be released this spring, with a contract then awarded in 2021/22.

“You need to fully understand the size of the challenge… by and large our geography can be described as four and a half time zones, or six and a half time zones depending how far out to sea, including the economic exclusive zones we care deeply about. We are 45 degrees of latitude north to south,” explains Lalumière. “When you are in defence you do not wait for what is fast and easy to come at your border. Of course, we look much further than this and [therefore] we are quickly interested in a quarter of the planet at all times.”

In February 2019, the RCAF took delivery of two Australian F/A-18A Hornets, at 4 Wing Cold Lake, Alberta, as part of an interim measure until Canada’s new fighter fleet is secured and delivered. Canada initially planned to buy 18 new Boeing Super Hornets, but scrapped that plan in late-2017 in favour of 18 Australian F-18 Hornets – expected to be delivered at regular intervals until the end of 2021. This is part of SSE policy to ensure Canada has mission-ready aircraft to meet domestic and international obligations. The move was also linked to political motivations following Boeing protests with the World Trade Organization (WTO) around unfair subsidies provided by the Canadian government to Bombardier for its CSeries aircraft program, now under majority control of Airbus and renamed as the A220 Series.

This same logic, however, would place the Saab Gripen E/F bid in the Future Fighter program at a disadvantage after Brazil in 2018 registered its own WTO complaint around Bombardier subsidies. With Brazil’s 2014 commitment to the Saab Gripen platform, Embraer became a major partner to manufacture the aircraft and to also help develop the two-seat F variant of the Gripen – with the E variant being the single seater. With Dassault’s self-removal from the Future Fighter RFP (confirmed on November 8 by Agence France-Presse), the idea of WTO disputes impacting procurement would leave just one viable Future Fighter candidate in the Eurofighter Typhoon, but even this multi-nation platform (Airbus, Leonardo, BAE) would create complications considering newly proposed U.S. tariffs targetting civil aircraft from the European Union, specifically what the Office of the U.S. Trade Representative labels as launch subsidies given to Airbus and impacting Boeing.

Given today’s range of WTO aviation disputes, it becomes difficult to predict how political pressures of the day might influence Canada’s Future Fighter RFP, particularly when the fleet is projected to last into the 2060s. Canada, as an early industrial partner of the F-35 Joint Strike Fighter Program, has not been immune from domestic pressures concerning its Future Fighter decision. Despite its participation in the F-35 program since 1997, Justin Trudeau’s Liberal government in November 2015, just days after being elected into office, cancelled an order for 65 Lockheed Martin F-35 aircraft. The order was made in 2010 by Stephen Harper’s Conservative government, which in 2012 was then accused of lying to Canadians about the cost of the F-35s. The Conservatives, according to the National Post (April 2012), pegged the cost at around $16 billion, including $9 billion for the aircraft and another $7 billion for maintenance and training, even as the government knew the true cost would be around $25 billion.

In October 2018, however, The Globe and Mail reported Canada paid another $54 million toward development of the F-35 stealth fighter, bringing its total investment in the joint program to approximately half a billion dollars over the last 20 years. Participating in the program provides countries with access to supplier contracts and price reductions on the purchase of F-35 aircraft, which will ultimately be a major factor in determining which supplier wins the Future Fighter bid.

From fighters to strategic transport
On April 17, 2019, Lockheed Martin announced it has moved some F-35 suppliers to what it calls longer-term Performance Based Logistics contracts and Master Repair Agreements – beyond what had been one-year contracts – to improve supply and reduce costs. The F-35 Joint Program Office (JPO) states the F-35’s newer production aircraft are now averaging greater than 60 per cent mission-capable rates. Lockheed Martin has reduced its portion of operating costs per aircraft by 15 per cent since 2015. The F-35 JPO goal is to deliver 80 per cent mission capable rates in the near term, and achieve a $25,000 Cost per Flight Hour by 2025.

In April 2019, Inside Defense reported the F-35 JPO has been working with the prime contractor Lockheed Martin and engine-maker Pratt & Whitney to reduce the cost of the F-35A to $80 million by 2020. Inside Defense also reported that Lockheed Martin expects to increase production rates by 40 per cent in 2019 with the delivery of 131 F-35 aircraft. These projections are significant in that it aligns the initially expensive F-35 platform with the other Future Fighter contenders on both cost per flight hour and cost per unit.

The new SSE vision for Canadian defence translates Strong as Home, Secure as North America, and Engaged as World. The Secure portion of the policy outlines Canada’s intent to eliminate threats in North America primarily through its NORAD partnership with the United States. Dassault noted Canada’s extensive interoperability requirements with U.S. forces as a primary reason for its RFP withdrawal. The opening of the Arctic – and clear intentions from Russia and Nordic countries to gain control in the polar region – places more emphasis on developing defence capabilities in tandem with the U.S. But this cooperation can also be found in SSE surveillance and communications projects.

SSE does not expressly account for a North Warning System Replacement, but it is on the table as a NORAD project. The Defence Investment Plan also holds a range of measures for improved sensors and control. BGen Lalumière in October describes these as SSE highlights, including the acquisition of new Tactical Integrated Command, Control and Communications, radio cryptography, and other necessary systems (Tic3Air), as well as upgraded air navigation management and control systems (MFATM); space-based development projects like the RADARSAT constellation mission; medium earth orbit search and rescue (MEOSAR); defence enhanced surveillance from Space (DESS-P); and Surveillance of Space 2 (SofS 2).

Lalumière also points to SSE highlights directly affecting the future of CAF aircraft (around 350 among all current Canadian military fleets). The new Strategic Tanker Transport Capability project to replace the CC-150 and CC-130T is to provide a first draft proposal in 2027, although the CAF has expressed a desire to accelerate that timeline. The fixed-wing SAR C295W project expects to see its first proposal in 2019. The Utility Transport Aircraft project to replace the CC-138 Twin Otter is expected to begin in 2025 and the Canadian multi-mission aircraft project, to replace the CP140 Aurora, is expected in 2033. The timeline for the Remotely Piloted Aircraft System project for medium-altitude ISR & Strike capabilities is still to be determined, but companies are already positioning themselves to be a part of the process.

The Cormorant Mid-Life Upgrade modernization project is currently ongoing and noted by Lalumière as a key part of SSE. The Future Fighter program also relates to major investments in training, defined in part as the Fighter Lead-In Trainer project. Current training is provided under contract with CAE for what is defined as NFTC (NATO Flying Training in Canada). The CFTS portion for advanced flight training of both multi-engine and rotary-wing is currently under contract with KF Aerospace. A third component for Air Combat Systems Operators and Airborne Electronic Sensor Operators is currently provided by 402 Squadron, which will be rolled into an overall SSE training project called Future Aircrew Training (FAcT).

The CAF is clearly putting an emphasis people as the ultimate SSE ingredient to achieve its objectives. This includes programs around health and wellness, civilian life transition, tax relief and diversity. SSE targets an increase to the CAF’s regular force by 3,500 personnel, as well as an increase of 1,500 in the reserve force. Approximately 12,000 personnel are currently in RCAF’s regular force, as well as 2,100 reserves and 1,500 civilians. “People will be the limitation in our ability to move at this pace,” explains Lalumière. “Twenty years, 10 years happens very quickly when it is all dependent on people.”