“This has been a record year for us,” 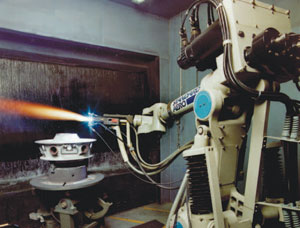 “This
has been a record year for us,” says Brian Hughes, vice-president of
sales and market business development at Winnipeg’s Standard Aero. “In
fact, this has been our biggest year ever.”

“It’s been an
exceptional year!” echoes Mike Guntner Jr., vice-president of
operations at Montreal’s Essential Turbines. “Despite the lack of
forest fires, our MRO business has been going quite well this year,”
concludes Robert Pritchard, director of maintenance for Avialta
Helicopter Maintenance in St. Albert, Alberta.

Why is the Canadian helicopter MRO sector doing so well?

“The
commercial helicopter business as a whole is up in Canada and the US,”
Hughes says. A driving force is the increase in oil prices, a factor
that is motivating many exploration firms to aggressively seek new
reserves. To achieve this, they are scouting out likely oil and gas
terrain from the air, a task for which helicopters are best suited.

“Even
in the Mackenzie Valley, where the native groups and oil companies
haven’t been able to strike a deal, aerial exploration is continuing,”
Pritchard says. “This means more helicopters are flying more hours, and
thus needing more MRO work done.”

In general, helicopter
carriers are expanding their businesses, which is resulting in more
work for Canadian MROs. In particular, “we’re seeing a lot of
specialization among carriers, rather than the old ‘we fly all
missions’ approach,’ says Guntner. “By focusing on specific niche
markets, these companies are enhancing their reputations and improving
their rapport with their customers. This is leading to more work for
these carriers, and thus more for us.”

Military clients are also
buying more services from commercial MROs; a trend that bodes well for
the Canadian industry. A case in point: Last year the US government
signed a five-year, US$70-million contract with Standard Aero for the
service and repair of US Army Kiowa Warrior reconnaissance/light
combat-duty helicopters. Under the contract, Standard Aero will service
up to 720 Rolls Royce 250 T703 helicopter engines, with all of this
work being performed at the company’s Winnipeg facility.

“They’re
relying on us to provide exceptional, unequivocal service,” says
Standard Aero president Paul Soubry. Given that these single-engine
Kiowa Warriors fly dangerous missions in Iraq and Afghanistan, “they
can’t afford to have a hiccup.”

Meanwhile, Avialta Helicopter
Maintenance is busy repairing Griffon helicopters for the Canadian
Forces. “The military doesn’t have enough trained people to do this
work internally, so they’re outsourcing more and more of it to
commercial MROs,” Pritchard says. “This is good for us.”

There
are a few challenges that are hindering the Canadian helicopter MRO
sector’s full exploitation of these boom times. The most serious is the
scarcity of replacement parts. To ensure the kind of quick turnaround
service their customers demand, MROs are coping by beefing up their own
parts inventories.

The extra cost this entails is tough on MROs,
“especially the smaller ones,” Guntner says. “Our customers don’t want
to maintain these inventories themselves because of the money involved.
I can’t blame them for doing so – it is smart to have someone else
carry your inventory costs if you can – but it makes life harder for
us.”

Why are parts so hard to find? “It’s primarily due to US
military foreign programs like Afghanistan and the war in Iraq,” says
Guntner.

“The US military is grabbing a substantial portion of parts, and now there’s not enough left for the commercial industry.”

Supplier
problems are making parts shortages worse. “For instance, one
helicopter manufacturer is suffering through a very serious parts
shortage after switching component suppliers a few years ago,”
Pritchard says. “Their new supplier couldn’t meet their delivery
schedule, and many of the parts that were delivered didn’t meet quality
specs.

Eventually, this manufacturer switched back to its
original supplier, which has helped. Still, I’m expecting that it will
take about two years to iron out the supply problems.”

Finding
qualified technicians is also a problem for the helicopter MRO sector,
especially given the irregular shifts MRO techs work in comparison to
other industries. In an effort to address this problem, Standard Aero
has formed a partnership with Winnipeg’s Red River College to ensure a
supply of new, properly trained technicians. It’s a win-win-win
situation for Standard Aero, the students, and the college: This is why
the company’s need for 25 extra technicians to meet its US army
contract doesn’t worry Soubry. “We’ve got trained people in the
pipeline.”

In general, times are looking up for the Canadian
helicopter MRO sector. Even the problems of scarce parts and hardto-
find technicians aren’t clouding the situation: That’s how good the
news is.