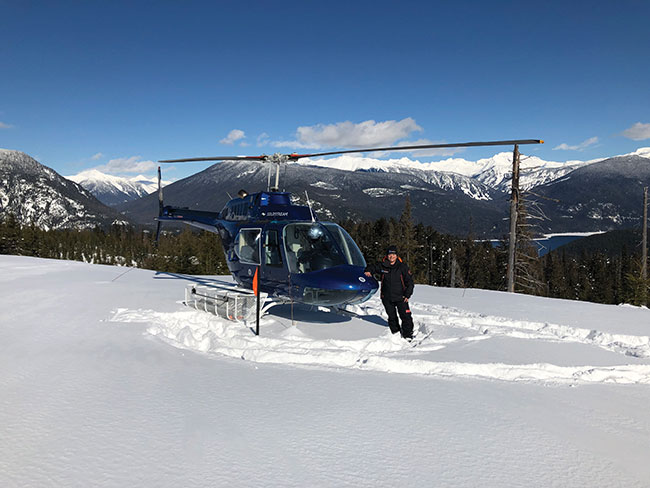 COVID-19 struck the aviation industry hard. Turmoil and uncertainly have many people worried about their future and the pandemic has created a change for almost everyone in the industry. So many aviation professionals are facing layoffs while others are working from home. Still others are out there fighting on the front line, like the pilots and flight attendants who are risking their health to ensure others make it home safely.

Tara Foss is in a different situation. She is not looking at being laid off or even slowing down. She is just gearing up for the Spring activities of many helicopter pilots. With all the craziness around us, it is important to not lose sight of the essential role that helicopter operations play across the country.

Foss is the chief pilot for Black Swan Helicopters which is based out of Berwyn, a village in northwestern Alberta located approximately 35 kilometres west of the Town of Peace River. The 2016 Census of Population conducted by Statistics Canada pegs Berwyn’s population at 526. Black Swan provides flight services for the oil-and-gas industry, wildlife managers and regional firefighters, as well as commercial charter services throughout Western Canada. Led by president Linda Johnson, the company was founded in 2002 and it is also a Transport Canada approved AMO, providing service for Robinson, Bell and Airbus helicopters.

In the colder months
For half of the year, Foss is helping to fight wildfires while the other half of the year is primarily spent either surveying animals or in the mountains. Every winter, surveys are conducted to count moose, deer, caribou, and sometimes bison (depending on budgets). Helicopter companies like Black Swan are primarily hired for these services through contracts with the government of Alberta.

Working with biologists, Foss flies grid patterns so that they can look out both sides of the helicopter and literally count the animals they see, while also determining their gender. One way they do this is by looking for a white patch to see if the moose is female. They are doing this to get an accurate count to know the number of animals in the region.

The Bell 206 helicopter flies a couple hundred feet above the ground allowing for viewing out the bubble window – male, female, juvenile, standing, laying down, the biologists have a set list of things to keep track of. The surveying typically runs between January and February depending on the weather and depth of snow. There are several helicopters up at the same time to ensure they are not recounting the animals and so that it’s done in the same temperature and conditions.

This year Foss also spent much of her winter at Silvertip Lodge where she flew helicopters for a heli-skiing operation. It was her first year in this role and she loved the experience, describing it as the most challenging flying she has ever done. Her job was to fly the Bell 206 support helicopter. In this role, she did weather checks, flew snow safety guides and picked up skiers that were either hurt or too tired to finish their skiing down the mountain. She also flew guides up to the weather station or repeater to check or repair them. It’s important that the weather equipment stays in working order as it transmits information like temperature and conditions back to the lodge. The repeater is used for guides and pilots to relay their position and any problems back to the lodge. 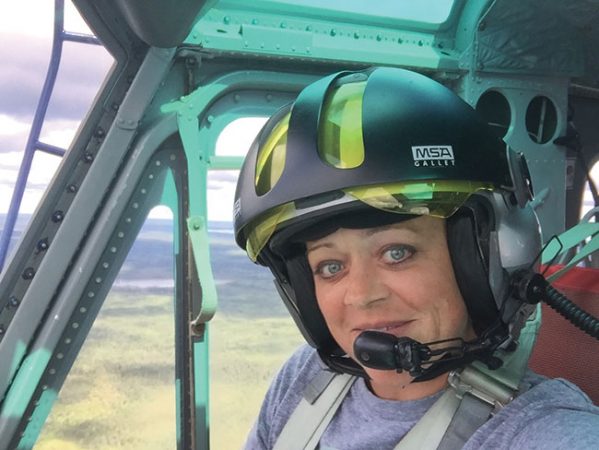 In the warmer months
As for her firefighting role, the Spring season typically starts in April when forestry workers can access locations. A typical worker will be flown into a forestry lookout tower mid-April and may stay there all summer, coming out sometime in late August or September. Foss is also one of the many pilots responsible for taking care of the tower people while they are stationed in place. Groceries, water, mail, anything they need is flown in on a regular basis ensuring their comfort and survival.

Foss and her co-workers are often assigned to a Helitack (HAC) crew. This means they are on call with a five-minute time limit to be airborne if a call comes in from dispatch. If no smokes are called in, the crew will usually go out on loaded patrols. The helicopter will often fly with a full load of firefighters – just in case they spot something on patrol. They receive their map from Peace River forestry and patrol for smoke. If smoke is spotted, a crew leader will make the decision if they can contain the fire or if they need to call for more resources.

Foss is the only female pilot with her company and I asked her why she thought more women were not helicopter pilots. “Probably lifestyle – I don’t know if many women want to be in the bush and rolling 45-gallon drums of fuel. You can be sitting in 35-degree weather with the bugs or, in the winter, it can be freezing in -35 degree weather. Not everyone wants to do that,” says Foss. “All that being said, I wouldn’t trade what I am doing for anything in the world. I love it. It’s a feeling of freedom when you are flying. I don’t know how to describe it… I just feel free when I’m in the air. It’s where I belong.”