A helicopter ferrying passengers from a Norwegian oil platform crashed in the North Sea on Friday and all 13 people on board are presumed dead, rescue officials say. The operation was called off at 5 p.m. local time after 11 bodies were found. Rescue officials said the helicopter was "completely destroyed." 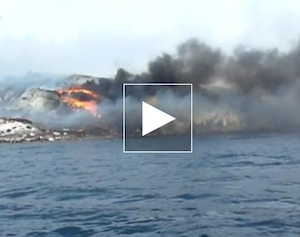 Boerge Galta, of the Joint Rescue Coordination Centre, said “we do not believe anyone can be found alive.”

The 11 passengers and two crew on the flight from the Gullfaks B oil platform, operated by Statoil, were mostly Norwegian, except for one British and one Italian national.
‘It caught fire before it crashed’

Several witnesses told Norwegian media they saw the rotor separate from the helicopter while still in the air.

“While I looked up, the rotor loosened and disappeared toward the north,” John Atle Sekkingstad told local newspaper Bergens Tidende. “After that, the helicopter turned north and I saw fire at the top of the helicopter, where the rotor had been attached. It caught fire before it crashed.”

The main body of the aircraft was lying under water, while its rotor was found on a rocky outcrop about 200 to 300 metres away, state broadcaster NRK said, quoting the rescue centre.

Plumes of smoke rose from the scene — a stretch of sea with many small islands, not far from Bergen, Norway’s second largest city. Pieces of red debris could be seen on the rocks, TV pictures showed.

A search and rescue vessel is shown off the coast of the island of Turoey, near Bergen, Norway, as emergency workers attend to the scene of a helicopter crash on April 29, 2016. (Rune Nielsen/NTB scanpix/Associated Press)

Another witness, oil worker Chris Andersen, told NRK: “I saw the rotor separate … It was horrible. There was a huge explosion that you could physically feel. You felt the vibrations.”

Norway’s king and the prime minister expressed their condolences to the families of the victims.

“You are not alone in your sorrow,” Prime Minister Erna Solberg, dressed in black, said in an address to the nation.

The site of the crash has frequent helicopter traffic to and from offshore oil installations. Weather conditions on the day were normal.
Temporary ban

The Norwegian Civil Aviation Authority immediately imposed a temporary flying ban on type of helicopter involved — a Eurocopter EC225LP — but said it was too early to say anything about the cause of the crash.

The flight was operated by CHC Helicopter, a helicopter-leasing company headquartered in Richmond, B.C.

“CHC has confirmed … that one of our aircraft in Norway has been involved in an accident,” the company told CBC News in a statement.

“The details surrounding the event are still emerging and a full emergency response plan has been initiated,” it added.

“Our thoughts are with those who may have been affected by this accident. We will be providing updates when more details have been confirmed.”

Airbus Helicopters, a subsidiary of Airbus Group, which is what Eurocopter is now known as, said it was “deeply saddened by this tragedy” and expressed its sympathy for the victims and their loved ones.

Now known as the H225 Super Puma, the aircraft is a long-range helicopter widely used in the oil and gas industry.

The company’s website says it “has accumulated more than 4.3 million flight hours during operations around the world and in all weather conditions, including highly challenging maritime environments.”

Visit the CBC News Website for the full article and video.