CHC Group has announced it will be the first helicopter operator to introduce the new generation super-medium AW189 aircraft into Australia. The three AW189s will be flown from CHC's Karratha base on behalf of Woodside to support their operations on the North West Shelf starting this month. 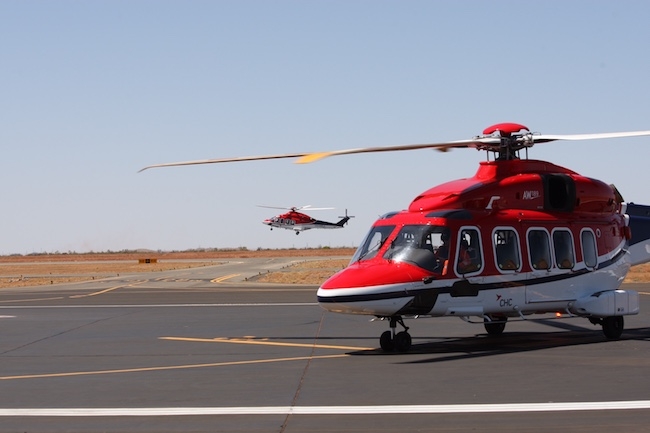 The twin-engine aircraft can be configured to carry up to 19 passengers and will provide passenger transfer flights to Woodside’s installations. It exceeds the most recent FAA and EASA Part 29 safety standards including the industry leading 50 min run-dry gearbox and is the first large helicopter in Australia to be designed to MSG-3 processes, providing greater reliability and less maintenance man-hours. The introduction of the aircraft positions CHC to efficiently manage Woodside’s longer range operations in future years while also providing a level of operational flexibility not previously seen in the Australian offshore market.

“We are delighted to be the first to fly the AW189s in Australia and to offer this new-generation aircraft to Woodside,” Vince D’Rozario, CHC Regional Director, Asia Pacific said. “The arrival of the AW189s marks a new chapter in our long and established relationship with the aircraft manufacturer Leonardo. We look forward to continuing to deepen this relationship as we provide this fit-for-purpose aircraft to Woodside, who we have proudly served since 2011.”

“We continue to work with our customers to offer them the latest technology, supported by our global standards and processes,” said Dave Balevic, Senior Vice President, Engineering and Operations at CHC Helicopter. “The 189 will be a great complement to our existing AW139 fleet. We have a history of success operating Leonardo products and look forward to setting new milestones with our new aircraft.”

CHC has operated Leonardo aircraft since taking delivery of its first commercial AW139 in the region back in 2005. Since then, the company has logged more than 125,000 flying hours across its global AW139 fleet. CHC started flying AW139s in Australia in 2008 for emergency rescue and as oil and gas passenger transfer services. In January 2017, CHC Australia celebrated 25,000 flight hours over 10 years on the AW139. The AW189 will build on the proven reliability, safety and comfort of the AW139 with a common pilot interface for pilots and a similar passenger experience for customers.