A white Hughes 300C drops out of the sky, the slap of its propeller blades carrying across the soy field on a warm breeze. 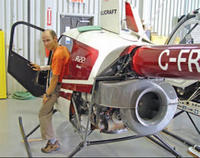 A white Hughes 300C drops out of the sky, the slap of its propeller
blades carrying across the soy field on a warm breeze. Its pilot,
practicing autorotations, flares too soon. He drifts forward, then
tilts nose-down as he picks up forward speed. A moment later he is
barely 60 metres away, pausing over the hover area before flying to one
of 10 white-painted circles on the apron beside Helicraft 2000 Inc.
Next, a pilot doing conversion training in a wine and silver Robinson
44 scopes out the landing zone, then joins the Hughes, a sexy blue
Astar and a red Bell 206.

Pierre
Guernier, ground school instructor for the helicopter school, roughs
out its mandate. “We graduate about 25 private and commercial pilots a
year. That means 2,500 flying hours a year for the school. This is our
objective.”

Located just off the northwest corner of St-Hubert
Airport on Montreal’s South Shore, Helicraft is school, maintenance
shop and commercial helicopter provider. It is owned by Groupe Benoit
Allard (GBA), which also owns companies such as Heli-Excel and Mustang
Helicopters, service providers in Sept-Iles, QC and Red Deer, AB
respectively.

“GBA owns more than 100 choppers. When a major
overhaul needs to be done, especially the Bell 205, we have the
expertise, tools, certifications and parts inventory to do maintenance
specifically on Bell helicopters. Helicraft also does third-party
maintenance for other owners,” Guernier explains.

For
pilots who want to learn turbine, the school uses the commercial
helicopters. “That is an advantage we have over other schools,”
Guernier says. Helicraft also does conversion training from fixed-wing
to helicopter, from private to commercial and from foreign to Canadian
licences.

The school has four full-time and two part-time flight
instructors, most with experience as bush pilots. The most experienced
has been a flight instructor for three years. The IFR instructor has 20
years of experience and is also airline helicopter-rated. A vintage
Transport Canada-certified flight simulator provides basic VOR and ADF
instrumentation training.

Field experience, often through work
contracts with Helicraft, hones the skills instructors pass on to their
students. “One of our pilots just finished raising his hours in
Saskatchewan on a contract for a geologist. He worked with a chopper
equipped with floats,” says Guernier.

The Hughes 300s can be
equipped with float kits so students can be given the specialized
training this configuration requires. “It takes special training to
start the engine, taxi on water … the chopper can drift sideways and
flip,” Guernier explains. “Pilots have to learn the skills to land with
floats on water. The floats change the aerodynamics.”

Another
valuable skill taught at the school is short-line and longline flying.
The 300Cs and CBs are equipped with hooks for carrying loads for Bambi
Bucket firefighter training. “This kind of flying, especially with long
line (up to about 150 metres) is a sought-after skill,” Guernier says.
“Right now two of the big employers are oil and mining companies who
use seismic tools to locate what they are looking for. There is nothing
better than a helicopter for carrying these tools over land with no
roads. It is not uncommon for pilots sent on these longline contracts
to not do well and be sent back. Few do this well, and it is a
specialty that pays very well. Thus, we need to be able to train our
future pilots in this skill.”

Who are these future pilots? New
entrants make up a mixed bag but, says Guernier, “the increasing trend
is to become a helicopter pilot as a second career. Here, the average
age of pilots is mid-30s. Many are fairly new to the industry and have
had careers successful enough to pay the $50,000.” That is the bill for
a commercial licence, but the total outlay by the time a pilot has the
225 hours required to apply as an instructor could be roughly twice
that.

A former teacher, Guernier has just over 200 hours flight
time and is still building up the hours, through Helicraft work
contracts, required to become a full-time commercial pilot. “You need
to have either sound financial resources or be hired by a helicopter
company to do other work while you build up your hours,” he says.

Some
40-60% of the school’s students come from abroad and it is easy to
obtain study permits. Helicopter tuition fees are far lower than in
Europe, where the restrictions on flying are stifling. “European
regulations are far stricter,” says Guernier. He adds that in Quebec
having a chopper land in one’s field is more entertainment than
nuisance, but in Europe a complaint would surely be lodged.

“Some
of the graduates go back to Europe, but among those who receive
professional training about half stay here to work as pilots. In Europe
it is becoming increasingly difficult to fly,” Guernier says.

St-Hubert
airport has controlled airspace, which benefits student pilots.
“Controlled airspace is seen as very stressful for most pilots, because
they have to get in touch with controllers. Here, they get used to the
procedures,” Guernier explains. Despite being fully-equipped – three
runways, an ILS and backcourse, full taxiway and runway lights and
tower – this ex-military base has no scheduled traffic, making it a
student-friendly environment.

Western Europeans can only dream
of the open land available to pilots to the north and east of the
airport. Yet cosmopolitan Montreal, well-appreciated by students, is
only a few minutes away.

The basic commercial helicopter licence
includes a minimum of 100 hours of flight training. Helicraft requires
pilots to have 250 hours of pilot-in-command hours before it will
consider them for instructor positions. Once on this rung of the career
ladder, they gradually build up flight hours in to become attractive as
career pilots. “There is not one employee who will give (a
newly-licenced pilot) an Aerostar or Bell and let you go play in the
woods. You become really interesting only when you have 300-500 hours
of flying experience,” Guernier says.

Damien Calichon, a recent
graduate, joins me in the school’s second-storey lounge; the school
dates back a couple of owners to 1969, but this building, housing
school and shop, is just a year old. We have an apron-side view of a
Eurocopter Twin Star warming up while a Hughes 300CB hovers in the
background.

A slim, early-twenties lad from
Fréjus/Saint-Raphaël, on France’s Mediterranean coast, Calichon found
out about Helicraft on the Internet. He chose Canada, he explains,
because “there are few companies in France that take pilots with low
hours. A lot of army pilots come into the market in France.”

Bankrolled
from home, he began training in mid-July 2005. He studied from 0800h to
1800h every day he could and received his commercial licence this
April, with 105 hours and type rating on the Hughes 300, Robinson R22
and 44. “I like the school’s ambience. It is a good group. I really
like it here,” says Calichon.

He has signed a deal with
Helicraft that lets him build up hours at a heavily discounted rate
while working contracts such as aerial photography, initiation flights,
tours and transporting people to get his 255 hours as pilot-in-command.

Then,
reads the deal, he will do an additional 30 hours instructor training
and once he passes an instructor test, he will do a stint as an
instructor for Helicraft, where he can build up 600-700 hours in a
year. Grooming new instructors is important for Helicraft; currently
its ground school enrollment is capped by instructor limitations. After
a year as an instructor, Calichon can get a contract to work further
with Helicraft for a season. “With 1,000 hours and time in the bush the
doors are opened further for work,” he says. He plans on staying in
Canada.

Helicraft has industry contacts, but no formal network
for recommending graduates. “We have three sister companies. We can
recommend graduates who want to work with them. But they have a very
limited number of low-time pilots,” says Guernier. “We are working on
developing more industry contacts.

“When a student finishes here
we offer him a two-week practicum within one of our companies. This
avoids the interview process – you have a chance to get known. It does
not mean you will be flying, but you will get known and it will
sometimes lead to a job offer. “There is plenty of work for chopper
pilots. It is not easy initially, but once you get started you will
never lack for work.”