I know it has been said before, but the Olympics are fast approaching. By the time this column is in your hands, there will be less than two years until the Vancouver Winter Olympics opening ceremonies.

I know it has been said before, but the Olympics are fast approaching. By the time this column is in your hands, there will be less than two years until the Vancouver Winter Olympics opening ceremonies. The influx of television commercials and media reports are further proof that time is running out to capitalize on the pre-Olympic business opportunities. While great progress has been made in the construction of venues and infrastructure, there are still many uncertainties. The largest question that continues to linger is the extent to which airspace restrictions will hamper normal operations.

It should be no surprise that airspace restrictions will occur. After all, there are few events that rival the scope of the Olympics. Past events can be used as a framework to evaluate the possible closures that operators will face. The unique and complex airspace and geographic features of the B.C. Lower Mainland will undoubtedly challenge the policies and procedures that are to be implemented. And with the number of aerodromes in the immediate area and the proximity of another nation and its different control procedures, challenges will only increase. Despite the large task, safety must be maintained not only for Olympic venues and participants, but aviation traffic as well. 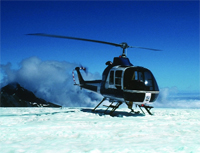 Is it possible to balance the priorities of safety and security while maintaining the desire to continue with normal operations? The answer is likely a short one – no. The Integrated Security Unit (ISU) is led by the RCMP and includes staff from various local police jurisdictions and the Canadian Forces. In mid-2006, the ISU founded the 2010 Aviation Advisory Committee (AAC) to better understand the needs and operations of the rotary- and fixed-wing communities.

It is a positive sign that the ISU has identified the need for consultation and due process. More important, it has included our peers in the realm of decision making. While the AAC is a step in the right direction for the special needs of our industry, the transparency has yet to permeate into the larger aviation fraternity. Many of Canada’s most respected air operators have either been consulted on a sporadic basis or not included in the process at all. There are however, countless small operators in the Lower Mainland who are “too small” from whom to seek advice. Tragically, it is these small operators, often with limited cash flows or reserves, who most likely will be significantly disadvantaged by any shutdowns or limitations.

The ISU has indicated that there will be a sliding scale of limitations and procedures based on events both locally and internationally. This proposed flexibility will undoubtedly offer strong advantages to area operators. Furthermore, it will likely build upon existing procedures to enhance security and lessen the confusion caused by the Olympic Games.

Many Olympic venues are in close proximity to aerodromes. For example, the Richmond Oval is likely to influence arriving and departing float plane traffic at the Vancouver International Airport Sea Plane Terminal on the Fraser River. A similar instance can be found in downtown Vancouver where the majority of the Olympic venues are situated. Both the Downtown Helipad and the Coal Harbour Sea Plane base are likely candidates to be adversely affected.

Only time will tell what limitations rotary-wing operators will face. Every facet of the industry will be affected – to what extent, though, remains unknown. The next meeting between the AAC and ISU was scheduled for March 13. Hopefully, more information will be made available to operators who are not involved in the decision-making process following this assembly.