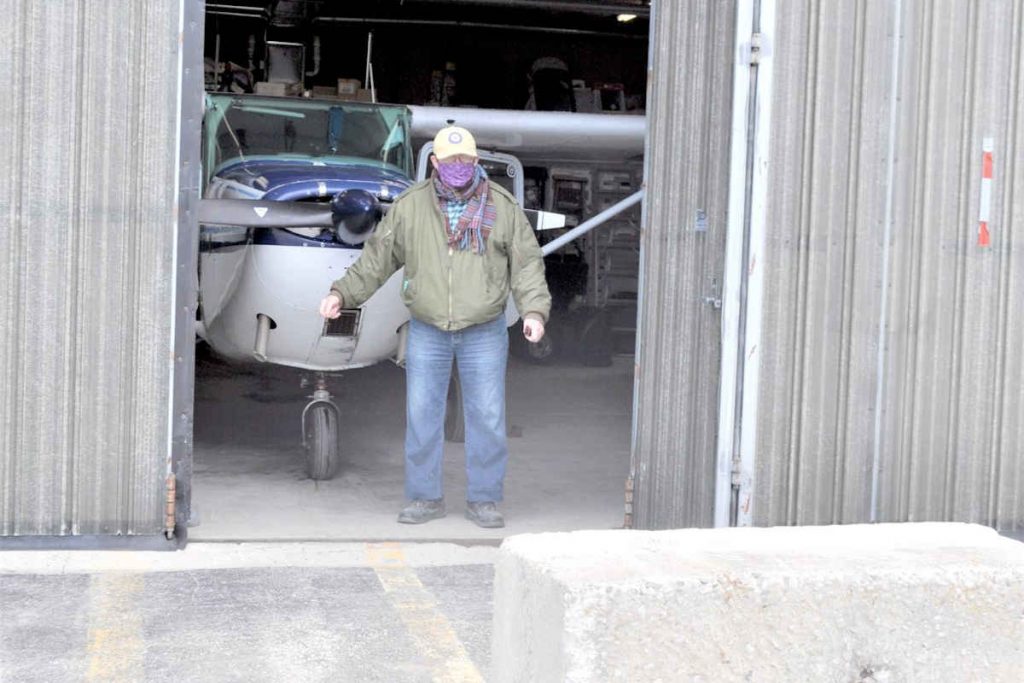 This photo was taken in the early spring, when Phil Englishman found access to his hangar at Saugeen Municipal Airport blocked with a large piece of concrete. He later removed his plane and has been flying out of another local airport. (Photo: Pauline Kerr, Local Journalism Initiative Reporter)

Phillip Englishman has had his day in court – and then some – and has emerged triumphant.

The local pilot has been involved in an ongoing and escalating dispute with the Saugeen Municipal Airport Commission (SMAC) that has involved a charge of trespassing, and a large concrete block placed in front of Englishman’s hangar to prevent access for the past several months.

As of press time (July 23), the concrete block remained in place even though the trespassing charge against him has now been thrown out.

In a brief interview Englishman said now that he has been vindicated, he wants the concrete block placed in front of his hangar by SMAC removed.

Not only has he been denied access to property the courts have said he legally has a right to use, he stated his reputation has been damaged.

“There wasn’t anything to investigate,” she said, in reference to an accusation there had been a safety violation, when according to Transport Canada, there had not.

She explained the block was placed in front of the hangar for a time and was removed briefly when Transport Canada sent a letter stating there’d be no investigation. Then the block was put back regarding the trespass charge, Gervais said.

“I saw this as impeding one of my members’ freedom to fly,” said Gervais.

Gervais said she would like to see the next step to be for the three communities (Brockton, Hanover and West Grey) to work toward “healing” the divisions.

She spoke of the many contributions Englishman has made to the airport, community and the wider flying community.

Justice of the Peace J. J. Ziegler announced his findings July 15 in the matter of the local pilot, charged with trespassing at Saugeen Municipal Airport on Aug. 29, 2019.

In all matters, his findings were in favour of Englishman.

He determined that Englishman was in the process of taking off from a runway at Saugeen Municipal Airport (SMA) on Aug. 29, 2019, when the trespassing ticket was issued. Since SMA is a registered aerodrome subject to federal standards, it is not subject to The Ontario Trespass to Property Act, so the ticket was quashed.

The matter of whether Englishman had a right to be on the property was a little more complicated, but Ziegler’s findings were completely in Englishman’s favour.

There were a number of matters Ziegler had to consider – uncashed cheques, an access agreement, and a letter from SMA commission chair Dan Gieruszak listing several concerns.

In the matter of the cheques, Ziegler stated, “The Court is of the view that the decision not to deposit or cash a valid cheque by the party to whom it is being offered (SMA) … does not amount to a breach of contract by the payer (Englishman).”

The “matters of concern” – a legal non-conforming shed, a fence that wasn’t Englishman’s, a burn barrel, a pile of wood (removed) and a parking spot – had been resolved between the Municipality of Brockton and Englishman.

Ziegler determined Englishman had “a reasonable belief that he had complied with his access agreement” and was entitled to use the property.

Ziegler noted the “matters of concern” outlined in the letter “could have been addressed by a visual inspection by anyone from the SMA driving by Englishman’s hangar.”

In the matter of the uncashed cheque, Ziegler found it was not “old” as the SMA commission chair had testified, and further, “his (commission chair Gieruszak’s) testimony that the SMAC did not want to cash the cheque for fear of additional costs if it is dishonoured was, in my opinion, a disingenuous explanation.”

Subsequent letters “on the part of the SMAC chair on July 30 and the letter of Aug. 14 threatening a charge of trespass were made without any prior verification of the work done by Englishman, without any discussion with the chief building official … and without viewing the property beforehand.”

Based on the exhibits, Ziegler found the SMAC had not established a breach of the agreement to justify the charge of trespassing.

He further found “Englishman had an agreement with the SMA to use the airport taxiway and runway based on an agreement dated Dec. 6, 2017.”