Craig Dobbin, the Newfoundland entrepreneur who built up a huge worldwide helicopter charter operation, died this past October at his home in Beachy Cove, near St. John’s where he was born on Sept. 13, 1935.

Craig Dobbin, the Newfoundland entrepreneur who built up a huge
worldwide helicopter charter operation, died this past 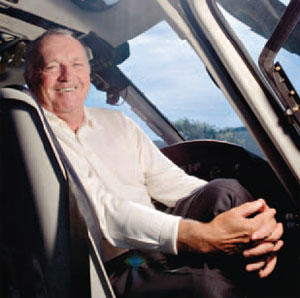 October at his
home in Beachy Cove, near St. John’s where he was born on Sept. 13,
1935. CHC Helicopter Corporation is the largest helicopter services
provider to the offshore oil and gas industry and operates helicopters
in 30 countries.

Dobbin,
who became by far the leading figure in the Canadian helicopter
industry, had no early background in aviation. He was a successful real
estate and development entrepreneur when, 30 years before his death, he
bought his own helicopter, a used Hughes 500D, for personal use. He had
been flying in a provincial government helicopter to remote fishing
locations with his friend, Frank Moores (who died in 2005 and was
premier of Newfoundland from 1972 to 1979). But he decided in favour of
greater independence through having his own personal transportation.

But
personal helicopters are expensive to operate and he looked for ways to
make money from the machines. The provincial government was then
developing a new public tendering act, and Dobbin won a commitment that
the new contract for helicopter services would go to the lowest bidder.
He sold his private helicopter at a profit, bought seven new Bell
helicopters and a small Manitoba helicopter operator that had a
commercial operating licence, transferred the licence to Newfoundland,
and won the bid. He started under the operating name of Sealand
Helicopters.

While never a helicopter pilot, the industry
attracted his entrepreneurial interest with a vengeance. “I believe in
forward motion and saw potentials elsewhere in the country. I wasn’t
about to rest my laurels in St. John’s. We soon moved into the offshore
market and also the international market,” Dobbin told HELICOPTERS
Magazine in 1997. “In the mid-eighties when the helicopter industry was
in a down cycle I started buying up companies to try and put a little
stability back into the industry by being a common-source operator.”

With
this visionary approach, Dobbin had by then snaffled 32 companies,
notably Okanagan, Toronto and Viking Helicopters, to form what had
become (in 1987) CHC.

When Dobbin spoke to HELICOPTERS at that
time, he was doing so from a hospital bed in Philadelphia where he was
recovering from major surgery – a lung transplant. It was complications
from this that resulted in his death nine years later.

By the
turn of the new milennium, CHC was so international that it was
deriving only 12% of its revenue from Canada; 68% came from Europe and
20% from elsewhere. It had acquired Norway’s Helicopter Services Group
(HSG), the world’s second-largest helicopter operation. This included
not only North Sea offshore operators Helikopter Service A/S of Norway
and Bond Helicopters of UK, but also Lloyd Helicopters of Australia and
Court Helicopters of South Africa.

As one company history
laconically notes, Norway’s HSG “unsuccessfully challenged CHC’s right
to acquire a European Community company,” on the basis of EC
citizenship requirements. HSG’s action was unsuccessful because “Dobbin
had earlier become a national of Ireland on the strength of his
historic ties to the country (and an endowment to the University of
Dublin).” Dobbin’s Irish family settled in Newfoundland in the mid-18th
century. That endowment was for one million pounds, to fund a chair in
Canadian studies. Dobbin was later quoted as saying: “It was the best
million pounds we ever spent. We made the company on the back of that.”

While
consolidating internationally, CHC later spun off its domestic
operations – charter, training, and repair & overhaul. In 2004
Dobbin shifted CHC’s headquarters from St. John’s to Vancouver – or,
more precisely, to Richmond, the suburb where Vancouver International
Airport is located.

On Oct. 6, 2006, CHC Helicopter Corporation
announced that the founder and executive chairman of the company was
taking leave of absence for serious health reasons and that 46-year-old
son Mark, deputy chairman, would take on his father’s role during the
leave.

The following day Craig Dobbin was dead at 71.