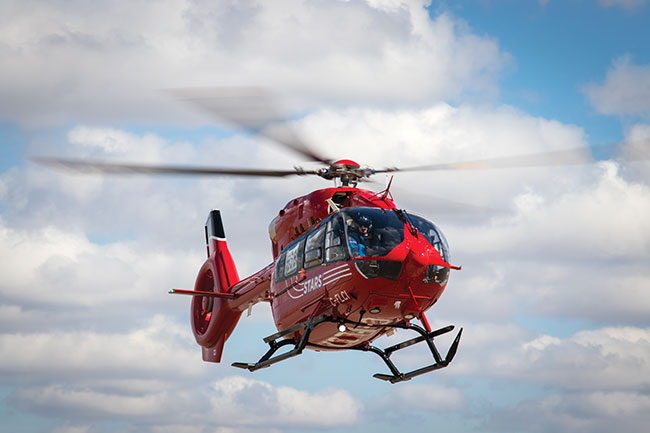 Since it flew its first air ambulance mission in 1985, the Shock Trauma Air Rescue Service (better known as STARS) has amassed a lot of experience providing critical health service in its helicopters.

The current Covid-19 crisis, however, has been challenging.

As with so many organizations affected by the pandemic, funding is the main operational issue facing STARS.

Revenue from its lottery is down $1.2 million, and regular funds provided through calendar sales have dropped 50 per cent.

STARS is also in the process of updating its fleet to a total of nine new Airbus H145 helicopters. By 2022, five helicopters will be used in Alberta, three in Saskatchewan and one in Manitoba.

The total bill for the fleet update is $135 million — $13 million per helicopter plus associated costs like pilot and mechanic training along with ground control equipment.

The bulk of the funds has already been provided by municipal, provincial and federal governments, but $30 million still remains to be raised through the STARS capital campaign.

Compounding the financial challenge is the rising cost of running missions and training pilots, all while dealing with health effects associated with the pandemic.

While current economic and health conditions leave many operational questions up in the air, support from communities, Ms. Farnden said, keeps the STARS organization grounded.

“During this time of distress and uncertainty, we must rely on community partners like you now more than ever,” she said.

“The one area that has remained staunch and unwavering is the support that STARS receives from our municipalities. We are truly grateful.”

The municipality gave $5,000 to STARS in October as part of its annual funding agreement, which Mayor Blair Painter said was money well spent.

“Council and our community really appreciates what STARS does in our area. I don’t know if you can put a price tag on that — saving a life,” he said.

The $5,000 funding to STARS is included in the 2021 budget package, and deliberations will take place over the coming weeks and months.

Though acknowledging that municipal coffers will be short some $2 million as a result of the provincial and federal governments withdrawing support, Mayor Painter said the importance of STARS to the community needed to be emphasized.

“I’m really hoping that we can continue the support that we’ve given you in the past,” he said.