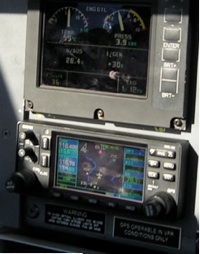 June 30, 2009 – DART Helicopter Services is pleased to announce that their affiliated partner, DART Aerospace Ltd. has received Transport Canada approval of a Traffic Advisory System (TAS) for the EC 130 B4 series aircraft.

June 30, 2009 – DART Helicopter Services is pleased to announce that their affiliated partner, DART Aerospace Ltd. has received Transport Canada approval of a Traffic Advisory System (TAS) for the EC 130 B4 series aircraft.

The DART Traffic Advisory System (TAS) installation increases the situation awareness and the safety of the EC 130 B4 series of aircraft by providing the pilot a view of other transponder equipped aircraft in the area.

The DART Traffic Advisory System modification consists of a Honeywell remote electronics unit mounted under the cabin floor, top and bottom fuselage mounted directional antennas, and two annunciators mounted on the instrument panel.  The traffic information is displayed on the existing Garmin GNS 430 in the center console.

DART Helicopter Services LLC PO Box 430, Piney Flats, TN 37686 (www.darthelicopterservices.com), is a privately held Sales, Marketing and Manufacturing Company whose primary focus is developing innovative STC’d products and creating sales networks for aerospace manufacturers who are looking to benefit from DART’s global marketing network and sales channel.  DART is the logical choice for rotary wing operators who are seeking a supplier with a comprehensive product line and superior customer support. DART’S subsidiary and affiliated companies own over 450 STC’s and manufacture over 500 products.  With its highly trained and knowledgeable North American and International sales team, DART Helicopter Services distributes more than 2,500 aftermarket products to over 120 countries worldwide. For further information, please call our Sales Office at 1 (800) 556 4166 or 1 (613) 632 3336 or by e-mail at sales@darths.com