A bright, sunny day couldn’t deter an overflow crowd that descended upon the Sportsplex at BCIT’s main campus in Burnaby, B.C., for Drone Fair 2016 Feb. 20. 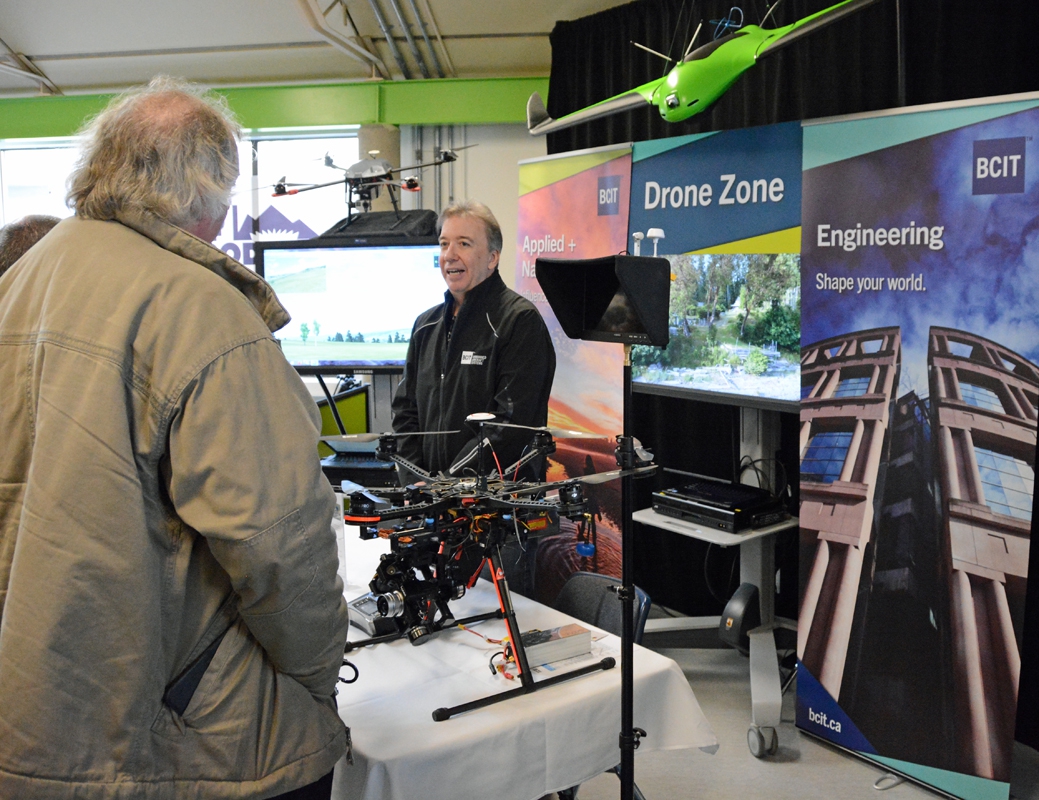 The first of its kind in western Canada, the fair brought together vendors, operators and regulators under one roof to talk about the latest developments in the rapidly expanding drone/UAV market, as well as regulations governing how and where drones can be safely operated. Organizer Declan Sweeney described the event as educational, an opportunity to highlight the positive side of drones in the light of recent negative media reports.

Safety and the regulatory environment were a major feature in the speakers program. “Drones are aircraft,” Sweeney said, “and they fall under the same rules as ordinary manned aircraft.” Sweeney’s comments were echoed by Eric Edwards of Unmanned Systems Canada who talked about popular misconceptions about the rules and regulations governing the use of drones.

“The rules are very clear,” Edwards said. “Whatever you are doing, it is still aviation.” The message was clear – get proper instruction in the operation of your machine, understand the regulations you are operating under, get the proper certification if required. The message from Transport Canada was simple and straightforward – whether flying recreationally or commercially, you are expected to operate your aircraft safely and legally.

Dr. David Bird of McGill University gave numerous examples of the utility and versatility of drones in assisting research biologists in wildlife studies around the world, from tracking polar bears in the arctic to deterring poachers in Africa. Drones offer greater flexibility to researchers at a price far less than manned aircraft with a great increase in safety. Another major attraction is the safety factor, as Dr. Bird reports the number one killer of wildlife biologists is aircraft crashes, fixed-wing or rotary-wing.

Justin Hannewyk of HeliVideo Pros gave an overview of the evolution of drones and filmmaking. A decade ago, the use of drones in the movie business was limited to a handful of major Hollywood productions – as in Bond, James Bond, and the Harry Potter movies. Airborne cameras were bulky and the unmanned aircraft were difficult for even the most skilled operators. Today, with the advances in digital cameras and drone technology, anyone can shoot movie-quality HD video with their own small, hobby drone.

The mainstream media has made much of privacy concerns around drones, as discussed by David Fraser of the law firm McInnes Cooper. A self-described technology geek and drone enthusiast, Fraser is described as being one of Canada’s foremost authorities on privacy law. He spoke of earlier technologies – the telephone and the Kodak Brownie camera as two examples and the concerns raised about potential invasion of privacy back in the day. There are a number of statutes that deal with privacy and trespass and while none of them specifically address the issue of drones, there are elements of these various pieces of legislation that may apply.

As the operator, it is incumbent on you to be aware of what you are doing. One of the major stumbling blocks at the moment is the common perception of just what a drone is. Most people, when asked to describe a drone will focus on something like the larger model – a Global Hawk or Predator – when the reality is that the domestic drone market is overwhelmingly comprised of small, hobby-size drones. A problem with creating specific privacy legislation to address drones is that by the time legislation is drafted and adopted by government, technology will have moved several steps ahead, creating new issues that were never contemplated.

The semi-main event was the University Challenge – four university teams competing for a $2,500 scholarship donated by DJI/Flying Camera. The teams had to build their aircraft in the morning and then fly them through an obstacle course in the afternoon. Simon Fraser University Team Guardian was victorious before a large and enthusiastic crowd.

The final event of the day was the Drone Fair Grand Prix, where eight local pilots competed in a series of heats through a course set up inside a large net on the basketball court of the BCIT Sportsplex. Think the Reno Air Races in miniature. The pilots and their machines were paraded across the floor before the multitudes. Spectators were cautioned not to get too close to the protective netting – just in case – and then on the toot of an air-horn the first heat was up and away. Like killer bees on the loose, the mini-machines snarled around the course, bobbing and weaving like hummingbirds on crack. The first heat ended peremptorily when two of the might mites sailed off into a cement wall – sort of like frog-in-a-blender meets bug-on-a-windshield.