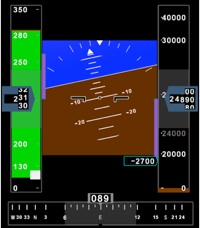 Conventional linear displays are forced to sacrifice display range in favor of display resolution, and consequently only show a small portion of the pertinent envelope.  In the case of the altimeter tape, the zero reference (ground or sea level) typically disappears from view a few hundred feet above the datum, so all situational awareness of the ground plane is quickly lost.  Similarly, the typical linear tape airspeed scale is expanded about a very small range, to retain an adequate legibility. This truncates much of the available range, so that critical limits only appear when they are about to be exceeded.

A second drawback of conventional linear tape displays is that they become unusable in highly dynamic situations.  A well-known dynamic phenomenon associated with the combination of linear airspeed and altimeter tapes is a strong unwanted roll cue during rapid descents or climbs, caused by the opposing motion of the two rapidly moving tapes.

The Dynamic Non-Linear Display concept addresses all of these issues, using a very simple principle: the display scale is dynamically and non-linearly altered to keep the current value, as well as predefined upper and lower limits (e.g. the ground, or maximum airspeed), in view at all times.  The illustration overleaf demonstrates the application of the Dynamic Non-Linear principle to airspeed, heading, and altitude displays.

The algorithm can take many mathematical forms, (logarithmic, sinusoidal, exponential, geometric, etc.), but is always arranged to decrease the resolution away from the current value.  Initial simulations indicate that the dynamic non-linear format has the following characteristics when applied to airspeed and altitude tape displays:

1.    Legibility and resolution are equivalent to conventional displays in the linear region of interest near the current displayed value.
2.    The retention of meaningful display end-points provides significantly improved airspeed and altitude awareness.  In particular, target “bugs” never leave the display or “park” at its extremes.
3.    The displays remain fully usable at extremely high rates, such as 30,000 FPM vertical rates, and 20 knot/second airspeed rates.
4.    Commonly used predictors, such as airspeed and altitude trend vectors, remain usable in highly dynamic situations, because they do not saturate on the new displays.  For example, a one-minute altitude predictor requires a display range numerically equal to the aircraft’s rate of climb or descent, which saturates a conventional display at rates in excess of a few hundred feet/minute.  The dynamic non-linear display is almost impossible to saturate during maneuvering within the allowable flight envelope of most aircraft.
5.    False roll cues during rapid climbing or descending maneuvers are eliminated.

The DNLD technology has been the subject of a series of flight trials by the National Research Council of Canada’s Institute for Aerospace Research:
(http://iar-ira.nrc-cnrc.gc.ca/press/news_1_20_e.html ).