Embraer on June 11 unveiled its vehicle concept for Urban Air Mobility during the Uber Elevate Summit 2019 in Washington, DC, where the first UberAIR international launch city was also announced. Development of Embraer’s planned aircraft, with electric vertical take-off and landing capability (eVTOL), is being led by its EmbraerX subsidiary.

“As a market accelerator committed to developing solutions to transform life’s experiences, we have been combining human-centered design thinking with our 50-year history of building and engineering expertise in a unique manner,” said Antonio Campello, president & CEO, EmbraerX. “These are the factors behind the technical progress and leading-edge innovations we are bringing to this new eVTOL concept.”

The company did not share many specifics of the planned aircraft, but graphics illustrate an eight-rotor system positioned across the vehicle’s body, with a much larger wingspan than other current eVTOL aircraft, a fly-by-wire system and wheelchair access. Perhaps in relation to its fixed-wing production experience, as opposed to the many Urban Air Mobility vehicle start-ups, Embraer has not set definitive timelines for the development and flight of its new concept vehicle.

Uber, however, has set an ambitious timeline for getting its UberAIR service off the ground, including plans to begin testing eVTOL aircraft in 2020. The company explains this will ideally lead to a 2023 start for its commercial aerial ride-sharing service. At the 2019 Uber Elevate Summit, Uber announced Melbourne, Australia, will be its first international launch city, joining Los Angeles and Dallas as launch projects in the United States. 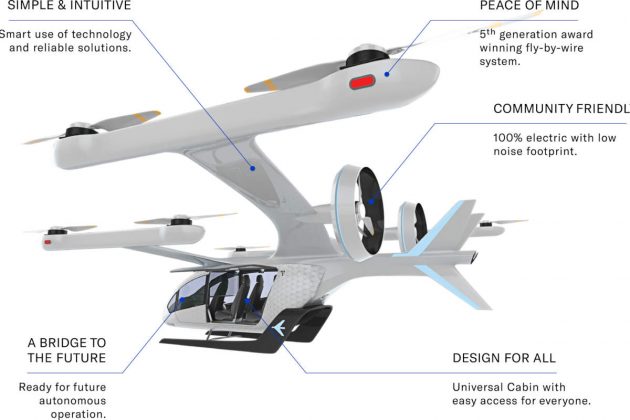 Embraer released an infographic describing some of the concept vehicle’s features, including a fly-by-wire system. (Image: Embraer)

At the 2017 Uber Elevate Summit, Embraer announced reached an agreement with Uber to explore the development of an ecosystem for electric vertical take-off and landing vehicles for Urban Air Mobility. As a result, Embraer efforts in this space have been largely focused on collaboration with third parties from air space regulators and systems developers to pilots and air traffic controllers.

The new vehicle concept is based on a range tests and simulations, explains EmbraerX, targeting reliability, low operating costs and a lower noise footprint. The aircraft will be fully driven by electric power and progressively autonomous.