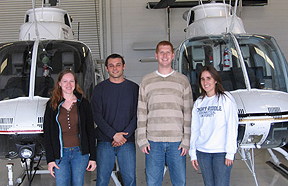 March 18, 2008,
Daytona Beach, FL – Embry-Riddle Aeronautical University,
in conjunction with Tomlinson Aviation Inc. of Ormond Beach, FL., and
Systems & Electronics of Chicago, has completed the first of a series of FAA-
sponsored helicopter research flights demonstrating technology intended to
enhance the safety and commercial viability of helicopters in the United
States.

Funded with a grant of $620,000 from the Federal Aviation Administration, the
project is evaluating Health and Usage Monitoring Systems (HUMS) equipment
that uses onboard sensors to monitor flight conditions and the health of
helicopter components. The prototype HUMS hardware was developed by
Systems & Electronics.

"Thanks to this technology, helicopter components in poor health can be
retired early, and healthy components can receive a life-limit extension," said
Dr. Pat Anderson, the Embry-Riddle Aerospace Engineering professor who is
directing the HUMS project. "Thus, HUMS will help helicopter operators
increase safety while at the same time lowering operating expenses."

The research flights were successfully completed on Feb. 16, 2008, in a Bell
206 Jet Ranger provided by Tomlinson Aviation. The team from Embry-Riddle's
Daytona Beach campus, composed of faculty, graduate students, and
undergraduate students from both the College of Engineering and the College
of Aviation, equipped the jet-powered helicopter with a prototype HUMS for
monitoring a suite of sensors collecting aircraft-state data in real-time. Initial
data reductions indicate that the tests successfully determined the health of
the helicopter's tail rotor in flight.

The team now moves on to demonstrate the same technology enhancements
in a smaller reciprocating helicopter similar to those used in pilot training.