Variety. New opportunities. Mentorship. A sharing of important industry safety data and trends. All are just part of the typical work cycle for Gary Krebs and it’s made for a truly interesting and diverse career. 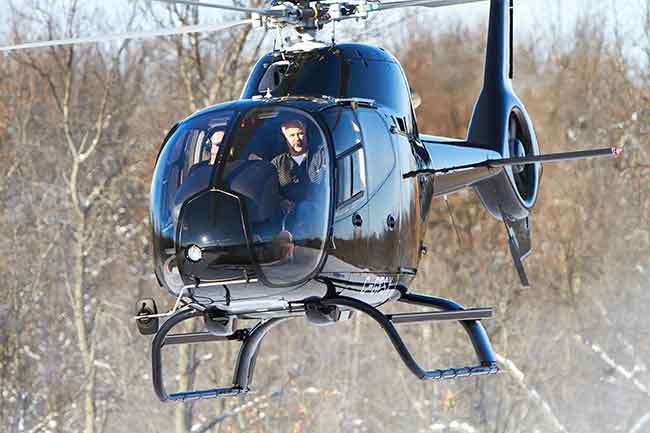 Gary Krebs gets to fly a variety of aircraft in his line of work Variety. New opportunities. Mentorship. A sharing of important industry safety data and trends.

Krebs is the chief test pilot of Airbus Helicopter and he has held the role for the past 16 years. It’s a challenging and diverse roll, which gives Krebs a chance to utilize a variety of skills gleaned from an equally diverse career in the helicopter industry. Helicopters magazine caught up with Krebs earlier this year to get his take on industry trends, safety, personal aircraft preferences and much more.

Can you give us a snapshot of what your job entails and how you got your role?
My position includes a wide variety of duties, the main ones include: experimental flight testing for STC’s (Supplemental Type Certificates); post-completion flight test; managing maintenance and pilot training; as well as flying demo aircraft. For example, in 2015, I toured from New Brunswick to B.C. and piloted three demonstrators: the H130, H145 and EC145C2e.

At the time they were looking for someone who spoke English and French. At my first interview, I was asked if I was bilingual and had answered with a definitive “yes,” as I speak English and German. At my second interview at the 2000 HAI (Helicopters Association International) tradeshow in Las Vegas, I interviewed with the Eurocopter (Airbus Helicopters) chief test pilot from France. When he began interviewing me (speaking French), I had to stop him to acknowledge the fact that I had very little understanding of the language. They had assumed that being bilingual meant I spoke English and French. After explaining the situation we all had a good laugh about it and because of my past experience and skillset, I was offered the position. In the end, the German does actually come in handy, as we are a French-German company. I am also currently taking French lessons from my wife, Stephanie, who is from Quebec.

There was a lot of opportunity for growth during my time with CHL. My experiences with Day VFR bush piloting, flying coast-to-coast across Canada, Mountain Flying courses, mutli-crew engine IFR as well as, working as a flight instructor and base manager, gave me the skillset to enter into corporate aviation and eventually become Chief Test Pilot at Eurocopter Canada (Airbus Helicopters). I was invited to be a guest speaker several years ago at an annual CHL base manager meeting. I spoke about my experiences with CHL and how I had gotten close to the five-year milestone but unfortunately the ceremonial pin had alluded me. At the end of my speech one of the CHL pilots took off his 10-year pin and presented it to me!

What do you like most about your position and why? What’s it like being the test pilot of a major OEM? What makes you come to work each day?
The best part of my job is the variety; no two days are ever the same. From flight-testing to training, I get the opportunity to fly a variety of aircraft across our product range. Although I enjoy experiencing the technology and ease of flight found in the newer models, I also savour the occasions where I get to fly classic aircraft, like the B0105 and BK117. I also enjoy testing the latest and greatest in STC’s for light single-engine aircraft, as this is what a vast majority of utility operators are flying across Canada. With my past bush/utility experience, I am able to work closely with our engineering department to develop exactly what will fit our customers’ requirements.

The work I do is interesting and what keeps me coming back day-after-day is the people. I receive incredible support from the team at Airbus Helicopters and have created many tight-knit relationships with a number of our operators over the years.

What changes have you seen in the development of the aircraft?
The definitive answer, without question, has to be the technology. The introduction of equipment such as Dual Channel FADEC, Four Axis Auto Pilot, TCAS and Helionix has been a game changer for the industry, decreasing pilot workload and increasing safety. Also, seeing the progression of the 350 series of aircraft has been very interesting. From where I started on the AS350 B, to the H125 and H130, these aircraft have really become the benchmark in which all other utility/multi-purpose aircraft are measured.

How do the aircraft being produced today stack up in terms of technology, safety enhancements and overall quality?
If you look at aircraft in the Canadian market, particularly the H125, with crash-worthy seats, crash resistant fuel-tank and VEMD, you can immediately recognize the importance that we place on not only reducing workload for the pilot but increasing safety. As technology advances, the high quality of our aircraft has remained consistent over the years.

Some 11 years into my career, I started flying AStar’s, which at the time, were considered an aircraft suitable for “experienced” pilots. Today, many low-time pilots fly AStar’s as one of their first experiences with turbine aircraft. As technology has progressed, so has ease of flight for this platform, which is significant, as the AStar is the most popular utility aircraft flown in Canada.

In general, operators are embracing new technology because of the decreased workload and increased safety features.

How important is the idea of recurrent training for pilots? What do you notice most about pilots that you train on new Airbus equipment? Anything stand out?
Annual recurrent training is essential for any pilot. The less someone is flying, the more important quality training becomes. That’s not to say training is not also important for pilots that are flying on a regular basis. As an example, most utility pilots are excellent at doing their job day-to-day, but do not regularly employ or think about emergency procedures and this is something that should be revisited frequently, even for the most experienced pilot.

I am also a big advocate of simulator training. We work very closely with our colleagues at Airbus Helicopters Inc. in Grand Prairie, Tex. to offer the best in highly realistic training aides for the H125, H135 and H145. This training method allows for pilots to practice emergency procedures without putting themselves in harm’s way.

Do you have a favourite helicopter and if so, why? Which machines do you feel suit the Canadian market best?
Honestly, my response would change depending on the mission. For utility missions, it’s the H125. It’s the most evolved single-engine aircraft out there today. Its triple redundancy for fuel control, dual hydraulics, VEMD, cargo space (especially with the addition of “Squirrel Cheeks”), multipurpose cabin, make this the aircraft of choice for utility pilots, especially flying in demanding environments.

The mission flexibility and excellent visibility of the H135 make it the perfect fit for Para-Public missions and the H145’s fully functional unobstructed cabin and state-of the-art IFR-equipped glass cockpit avionics as well as, the EC145’s VFR functionality, make it an excellent choice for EMS operations.

For operators who are looking for a true multi-mission platform, the H130 is incredibly versatile.

I’ve flown a wide variety of helicopters over the span of my career and these aircraft are, in my opinion, premier aircraft for not only the Canadian market, but on a global scale.

A general comment on safety – do you feel the Canadian market is as safe as it can be? How do we make it safer?
Safety practices are constantly evolving. For everyone, I know the ultimate goal is to reduce the number of accidents and eradicate all the avoidable ones.

This is essentially the reason that, in addition to providing recurrent training, we host a yearly Corporate Safety Symposium for our private operators as well as, a Hydro Symposium for our utility operators. Safety is our No. 1 concern and these gatherings permit us to communicate on the most relevant issues. I think it is also important to highlight those individuals and organizations that are already taking the extra step(s) in regards to safe flying practices, which we do through our annual Innovation in Safety Award.

In Canada, there are a large number of aging aircraft that will need to be replaced within the next five to 10 years. With this, will come the introduction of new aircraft technology, resulting in safer flying conditions overall.

I am also involved with the Canadian chapter of JSAT (Joint Helicopter Safety Analysis Team) through IHST (International Helicopter Safety Team). The stated goal of IHST is to decrease the amount of accidents by 80 per cent over the span of 10 years (period ending in 2016). Preliminary results have indicated that there has been a significant decline in safety-related incidents during this period, due to improved technology from the manufacturing level, heightened awareness in regards to the need for quality training as well as, devices like aircraft tracking and the Vision 1000. This equipment can be incorporated into day-to-day operations, relaying deviances and gathering important data.

Can you walk us through a typical season for Gary Krebs? How does it break down?
In addition to my regular duties, in the beginning of the year I travel to France and Germany for the Airbus Helicopters Annual Pilot/Instructor Standardization Symposium, where Airbus Helicopters pilots from across the globe come to discuss development and training to ensure a worldwide OEM standard. During the period(s) of January to May and October to December, we run annual Recurrent Training for day VFR utility pilots. Typically from March until the end of May we are conducting post-completion flight tests for day VFR aircraft that operators require before their summer operating season begins. There is typically another peak time for aircraft completions from mid-October to the end of December, for operators who require their aircraft be delivered by years end. Summers are typically not as busy due to the completion of operational training and the more relaxed production schedule, which gives me time to catch my breath, catch up on paperwork and prepare myself for the coming year.

In Canada, we have been working toward a more integrated North American approach with our operators. So, I have been working a lot more with the team at Airbus Helicopters in Texas. It is an exciting time for us. Our end game is always to offer greater resources for our customers. I think, from my own experience, the more tools we provide to our end user; the more opportunities become available to grow their business. In the end, we just want to support our customers and their aircraft by supplying the best products and services available.