“Helicopter pilot skills are not only deficient but their knowledge of fire physiology is sadly lacking.” 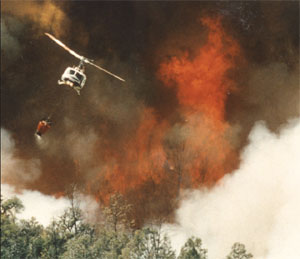 “Helicopter pilot skills are not only deficient but their knowledge of
fire physiology is sadly lacking.” This was among the many conclusions
reached by a select panel of experts commissioned to study aerial fire
suppression in US, with some research conducted in Canada. While
targeted at the US, the blue-ribbon panel’s observations are
essentially as valid here as south of the border. US Forest Service
chief Dale Bosworth and Bureau of Land Management (BLM) director
Kathleen Clarke chartered the panel in light of the many issues
surrounding aerial firefighting, including three fatal aviation
accidents during the summer of 2002. Their goal was defined to help
agencies “determine the adequacy of the current system by identifying
weakness and fail points, and strengths, in areas of safety,
operational effectiveness, costs, sustainability, and strategic
guidance.” After three months of meetings in numerous cities and
consulting with Office of Aircraft Services, BLM and Forest Service
aviation personnel, the panel provided a scathing assessment of the
overall wild land firefighting aviation program.

The
report found that different philosophies between agencies create a
“mission muddle” that seriously compromises the safety and efficiency
of aviation asset management. Essentially, there is a need between
agencies to adopt “a common operation plan with clear lines of
authority.”

On the positive side for helicopter operators, the
panel found there were major safety challenges in the operation of
surplus fixed-wing tankers operating in the ‘restricted’ category, and
the well-documented breakup of the B-24 Privateer and Lockheed Hercules
were final straws in this area. However, most of the helicopter fleet
is certified and operates to higher standards – with the exception of
the few military surplus machines. Another plus that could create
change included the criticism that “government contracts for helicopter
fire management services do not adequately recognize the business and
operational realities or aircraft limitations.” As a result, contract
provisions contain disincentives to flight safety. In the city-to-city
discussions, helicopter operators were very vocal about ridiculous
provisions established by fire management, and the panel concurred with
their observations. Expect changes.

The panel observed that
helicopter pilots are isolated from fixed-wing pilot operations and
there was little feedback on accuracy or communication with other
aerial or ground assets. This leads to poor suppression efficiency.

While
some aspects of Canadian and Californian fire management were lauded in
the report, the panel found many shortcomings in general caused by
agency conflicts and differing fire-suppression strategies. Some
organizations don’t seem to recognize the importance of an efficient
initial attack program or how to operate cost effectively in large
program fires.