News
Farewell to the Sea King

On December 2017, the Royal Canadian Air Force had one of its Sea Kings painted in its original Royal Canadian Navy colours. The project was initiated a year before the retirement of the CH-124 Sea King fleet by Major Trevor Cadeau. 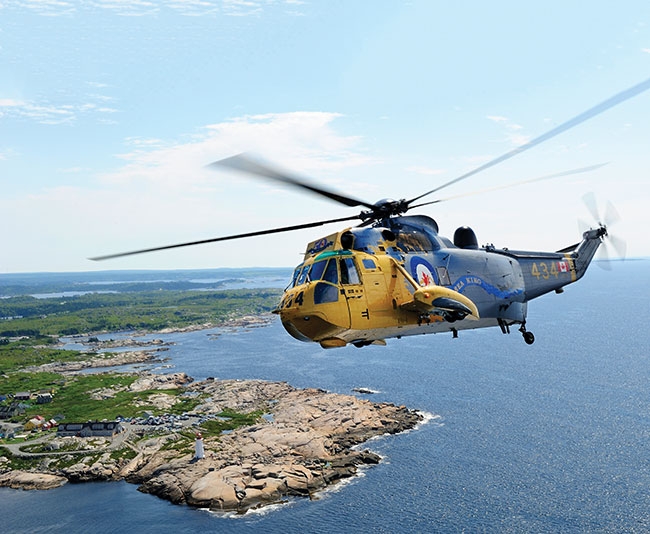 The Sea King 50th Anniversary aircraft in Halifax. On December 2017

This was but one of the many of the initiatives by the RCAF to celebrate the achievements of Canada’s longest-serving military aircraft, which undertook a cross-country flight to share this historic aircraft with Canadians from coast to coast.

Officially retired at the end of December 2018, below are some of the final dispatches from the Canadian Armed Forces to recognize the legacy of the Sea King.

July 26, 2018, Sea King, going out with style, by Lieutenant-Colonel Travis Chapman: Designed in the late 1950s and procured by Canada through a dynamic acquisition program in the early 1960s, the CH-124 Sea King helicopter has served Canadians with distinction since May 24, 1963. Longevity, avionics and mission system upgrades, and the utility of a medium-lift helicopter came together to create a legacy that ignites a passion spanning multiple generations, unlike any other Royal Canadian Air Force asset.

In many ways, Canada’s efforts to embark a large aircraft on a small flight deck revolutionized the concept of organic air support to naval operations by showing the theoretical to be possible. Given the capabilities of a larger helicopter, crews could carry more armament, more fuel, and a suite of avionics – with capacity for growth. Considering the rapid advancement of submarine capabilities in the 1950s, the CHSS-2 became a potent counter-punch to non-friendly submarines. Over time, it proved capable of acting as an autonomous, multi-role ASW weapon system through several permanent and temporary modifications that included radar, sonobuoy processing, GPS, automatic identification system, tactical common datalink, and various iterations of tactical navigation computers, as well as the development of aircraft-specific tactics for crews to employ.

The success of the latest livery project belongs to a large team from Patricia Bay, BC; Shearwater, Nova Scotia; Ottawa, Ontario; and Winnipeg, Manitoba. Essential to its impressive execution were technicians from 12 Air Maintenance Squadron (AMS), and 423 and 443 Maritime Helicopter Squadrons. Of course, once painted, it had to be reassembled. Again, personnel from 12 AMS, and 423 and 443 Squadrons worked tirelessly, putting the aircraft back together.

December 1, 2018, Final farewell to the Sea King, by RCAF: The Canadian Armed Forces gave a final salute to the CH-124 Sea King maritime helicopter, marking its more than five decades of service, in a parade held today in Victoria, British Columbia. The Sea King will officially retire from service by December 31, 2018, as the RCAF completes its transition to the CH-148 Cyclone maritime helicopter.

“The retirement of the CH-124 Sea King is truly historic for the Royal Canadian Air Force,” said Lieutenant-General Al Meinzinger, commander of the RCAF. “No other fleet has served as long as the Sea King, and its 55 years of service are a monument not only to its durability and capability, but to the men and women who operated, maintained and otherwise supported this incredible helicopter.”

The CH-124 Sea King is a ship-borne maritime helicopter and the longest-serving aircraft in the RCAF fleet. The Sea King supported operations at home and around the world for 55 years. “The Royal Canadian Navy has been well served by the Sea King – our longest range weapon and sensor – for decades. It was an honour to fly with the crew of Black Horse, the helicopter deployed with HMCS St. John’s, during the Sea King’s last operational deployment supporting NATO assurance measures this summer,” said Vice-Admiral Ron Lloyd, commander of the Royal Canadian Navy. “Canada’s Navy and the Royal Canadian Air Force continue to forge ahead with an exciting new chapter, marked by the first operational deployment of Avalanche, the Cyclone helicopter currently deployed on NATO operations with HMCS Ville de Quebec.”

Thousands of men and women have been involved in the operations and maintenance of the CH-124 Sea King. There are several examples of more than one generation of serving military aircrew and technicians from the same family working on the aircraft, sometimes at the same time.

The CH-124 Sea King fleet has flown more than 550,000 hours, which, at a cruising speed of 162 km/h, is roughly equivalent to flying 7,200 times around the Earth, or the equivalent of the distance from Earth to Mars. Over its long history, the CH-124 Sea King participated in a wide variety of operations, including NATO and other international maritime operations; search and rescue; disaster relief; counter-narcotic operations; international peacekeeping; counter-piracy; and pollution and fisheries patrols.

Most recently, a CH-124 Sea King was deployed in a transport role during Operation Lentus 18-05, the Canadian Armed Forces’ support to fire-fighting operations in BC. The last overseas deployment for the Sea King came during the first half of 2018 aboard Her Majesty’s Canadian Ship (HMCS) St. John’s as part of Operation Reassurance.

As the fleet nears final retirement, disposal planning for the CH-124 Sea King is ongoing. This includes some aircraft being put up for sale and some being retained by the Department of National Defence and the Canada Aviation and Space Museum for display or training purposes. Those going to museums will continue their service as ambassadors of maritime aviation.

December 7, 2018, Honouring the Sea King on a day like no other, excerpts from Lieutenant-General Al Meinzinger, Commander, RCAF: Today we say farewell to an aircraft that has seen more than a half century of service and has become an icon to both the Royal Canadian Navy and the Royal Canadian Air Force.

Where do I start to pay tribute to this great aircraft – the CH-124 Sikorsky Sea King – its aircrew, its maintainers, its support personnel and of course its manufacturer. Over the 55 years of proud Sea King operations, hundreds of thousands – and perhaps millions – of words have been written or spoken about this particular phenomenal helicopter.

When the first Sea King took flight in March 1959, the Cold War was in full swing and the Soviet Union was our primary threat… After the Cold War ended, the Sea King became a multi-purpose naval helicopter, serving in places ranging from Somalia, to the Persian Gulf, to Libya, the Baltic Sea, the Caribbean and many more, conducting counter-piracy operations, counter-narcotic operations, counter-terrorism work, and humanitarian aid missions, and even supporting search and rescue here at home.

During the First Gulf War, the Sea King took on a new role, anti-surface warfare. The Sea King was already 28 years young at that point and replacing her was a topic for discussion in Ottawa. Little did we know, she was only half way through her journey with plenty of magnificent contributions [remaining] to deliver for Canada.

As we celebrate the Sea King and its incredible team, we must also remember those whom we have lost. You may know that I’m from the helicopter community, but my background is flying Twin Hueys and Griffons. I confess that I only flew in the back of a Sea King once. In 2007, we were very concerned about flooding on the lower Fraser River, planning for a potential disaster and subsequent Canadian Armed Forces response. I was designated the air task force commander for this contingency operation that would have seen us cobbling together a good portion of the RCAF had the Fraser River spilled over her banks, thankfully she did not. Intending to mount our operations in Abbotsford, I flew in a Sea King for a [reconnaissance] of the river.

My battle buddy for this trip was my designated maritime helicopter liaison officer – Captain Tim Lanouette – whom I met in Abbotsford upon arrival. He was an absolutely super fellow who I befriended immediately after meeting him. Sadly, Tim later tragically died in a helicopter crash in Newfoundland. So although Tim was not lost during Sea King service, he is very much on my mind today.