News
Fitting the pieces together

Punching above its weight. Open for business. Finding just the right niché to build on a strong foundation.” 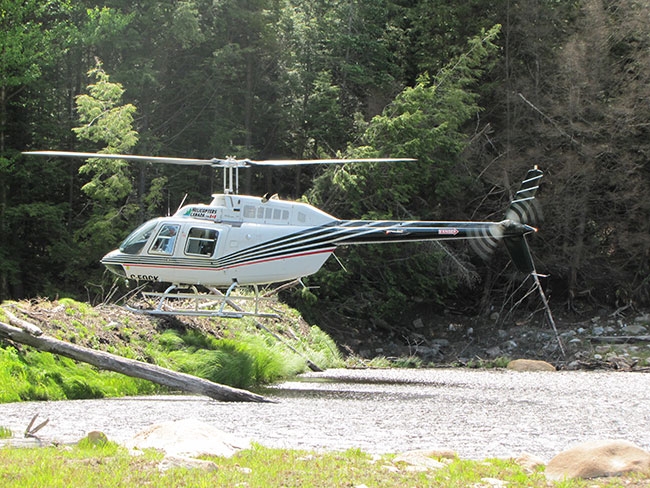 Helicopters Canada Flight Training and Charter offers a number of helicopter training options. Punching above its weight. Open for business. Finding just the right niché to build on a strong foundation.”

Poignant expressions all and certainly accurate ones to describe the city of North Bay’s aerospace footprint – a developing infrastructure with strong ties to the past striving towards an even brighter future.

Located some 344 kilometres north of the GTA and centrally located between Sault Ste. Marie to the west and Ottawa to the east, this vibrant northern city of some 51,000-plus located on the shores of Lake Nipissing has one of the most diverse economies of Ontario’s northern communities – and a very rich aerospace history to boot.

Much of that history is connected to the Royal Canadian Air Force (RCAF). Since the 1930s, North Bay has served as a strategic location for the RCAF as home to both 22 Wing North Bay and its 21 Aerospace Control and Warning Squadron.

The city’s military footprint is extensive and has grown from its initial use as an emergency landing field in 1933 to playing key roles in both the Second World War ferrying Liberator and Lancaster Bombers across the Atlantic to Europe. It also played critical roles during the outbreak of the Korean War before transforming into the main nerve centre for NORAD.

In October 2006, Canadian NORAD Region air defence operations moved out of its Underground Complex into a new state-of-the-art installation named the Sgt David L. Pitcher Building, after a Canadian serviceman who was killed in the crash of a U.S. Air Force AWACS patrol plane in 1995.

The new $16 million command centre was built above ground and the complex proudly continues its role as one the most important air bases in Canada, responsible for the air defence of the nation almost half of the North American continent.

The North Warning System is used to ensure Canadian sovereignty in the North and to support North American air surveillance and air defence operations under the North American Aerospace Defense Command (NORAD) agreement.

Connecting the dots
North Bay’s military footprint past and present is a strong one, yet the future of its aerospace footprint lies in attracting new and diverse commercial and business partners to its hub around Jack Garland Airport.

Located minutes from the downtown core and situated around acres of wide open green space, the airport is served by regional, international and charter operators including Air Canada, Porter Airlines, Bearskin Airlines, Jazz Aviation LP and Sunwing. The city has invested more than $30 million in the past decade to upgrade the airport and surrounding lands, making it a prime spot for aerospace companies looking to expand and grow.

Rotary- and fixed-wing aviation training on both the flight and maintenance engineering sides of the equation are a true hallmark of the city’s aerospace footprint, with a variety of options available to aspiring students. The airport is home to some of the most respected training schools in the province, with Canadore College’s School of Aviation, Helicopters Canada Flight Training and Charter and Essential Helicopters all calling Jack Garland home.

Other key aerospace players dot the site including Voyageur Aviation Corp. (Chorus) the Ministry of Natural Resources and Forestry (MNRF) – with its new $9.5 million state-of-the-art Fire Response Facility this year – and Comsatec Inc., an energy management firm based in Callander, Ont. and Toronto.

With some 48,000-plus aircraft movements last year, the airport is a bustling spot with a diverse mix of aircraft and operations according to Jack Santerre, the airport manager at Jack Garland. Santerre recently took Helicopters on a tour of the airport and the surrounding property.

Erin Richmond, manager of economic development for the City of North Bay underscores the progress that is being made, acknowledging that ironclad partnerships between industry and the city and ease of operations are drawing cards that should foster growth.

Santerre is on the team and is impressed with the way community partners work in unison. “The City of North Bay as a whole is a very strong supporter of the aviation community,” he said. “The city realizes the importance of an airport and how it helps drive the economy in the community. Airports are not only transportation hubs, but they are catalysts for economic development and growth.”

It also doesn’t hurt to have a mayor that lives and breathes aerospace – it’s in his blood. Mayor Al McDonald’s father was an RCAF pilot who was stationed all over Canada in a variety of roles. He shared some of his adventures and visions for North Bay’s aerospace future with Helicopters during a lunch break on our tour.

“From a North Bay perspective, I think we have a great opportunity here,” McDonald said. “But it is about political will – it is putting a lot of time and effort into developing it. We have all the pieces here, it’s just how do you give it even more attention.”

Educational building blocks
One of the pieces firmly in place in North Bay is its educational offerings for aspiring aviation students. Canadore College School of Aviation is one the most respected colleges in Ontario, offering students a diverse mix of academic programs in fixed- and rotary-wing operations. From flight training at partner Essential Helicopters to one of the college’s structural, mechanical, avionic and composite repair and engineering programs, the college has a solid reputation throughout the industry.

A tour of the bright, inviting campus reveals not only a high competency level of academic proficiency, but an equally high level of commitment, dedication and passion from its instructors, ensuring students are properly and effectively prepared for future industry roles.

The college prides itself on its 15-1 student to professor ratio and is equally proud of the fact its instructors – most active in the field themselves – bring hundreds of years of practical experience to their roles in a variety of engineering and maintenance fields. It is also basking in the glow of a new multi-million dollar composites wing and a $400,000 boost to its avionics program.

Getting in the spin
Aspiring helicopter pilots hoping to make their mark in the rotary world have two strong options in Helicopters Canada Flight Training and Charter and Essential Helicopters. Both offer students intimate hands-on class instruction from experienced, industry-respected pilots. Current industry trends in forestry, mining and aerospace have created increased demand for both helicopter charters and qualified rotary pilots.

Founded in 2000, Helicopters Canada Flight Training and Charter  has experienced steady growth with a fleet of six helicopters, delivering internationally recognized flight training programs. Programming includes commercial licencing, private licencing, foreign conversions, night rating, and more. Training at Helicopters Canada aims to prepare students for the realities and skills required in the industry. The students build their time learning advanced flying techniques, which can include short- or long-line slinging, hover exit and water bucketing. It is not uncommon for students to graduate with five to 10 hours of solo slinging.

“The world-class training program at Helicopters Canada attracts students from around the world who are seeking a high level of expertise, and the unparalled training environment North Bay provides,” Shana Sullivan, president of Helicopters Canada Flight Training and Charter said. “We train students to get a licence, but also train the skills employers are looking for.”

Essential Helicopters offers a variety of helicopter training services that includes flight training, charter and maintenance. Essential has partnered with Canadore College to provide its College Pilot Preparedness Certificate program in commercial helicopter pilot training, the only flight training program of its kind in Canada.

With a fleet of six aircraft including Jet Rangers, R22s and R44s, the intimate classroom settings at Essential’s home base enable students the flexibility to pick their program for total of 100 hours – they can mix it up based on their budget and what they desire. Essential has also a new fixed-wing program for students that have designs on a career on the fixed-wing side of the business.

Essential’s educational programs on the rotary side also include training in many of the soft skills students will need in real world situations: for example, learning to use a chain saw to build a heli pad, first aid, all aspects of base development, aircraft scheduling, egress training and more.

A look to the future
With its rich aerospace history, foundation of key pieces in place, busy airport and a strong cohesive network of industry partners working in unison with city to drive business, North Bay is certainly not starting at the bottom – and it’s open for business and working its way up. Establishing a key nichés that set it apart is one of the goals going forward.

And whether that’s providing support for the city’s strong mining supply and service sector – the possibility of airships perhaps? – unmanned aerial vehicle (UAV) testing in the vast green space that surrounds the airport or BizAv growth, the city is working hard to entice new players to venture north.

“I explain it this way in business,” McDonald said. “Let’s say, you walk into a grocery store and you see a can of Coke, Pepsi, and RC Cola (with RC being North Bay). Even though RC might be better than Pepsi and Coke, you probably will pick Pepsi or Coke. What we need to be able to do is to get people to pick RC – because people just don’t see us for what we offer right now. If you were trying to put the whole puzzle together, I think we have all the pieces right. Now, we just need to try to inform people of what we have.”