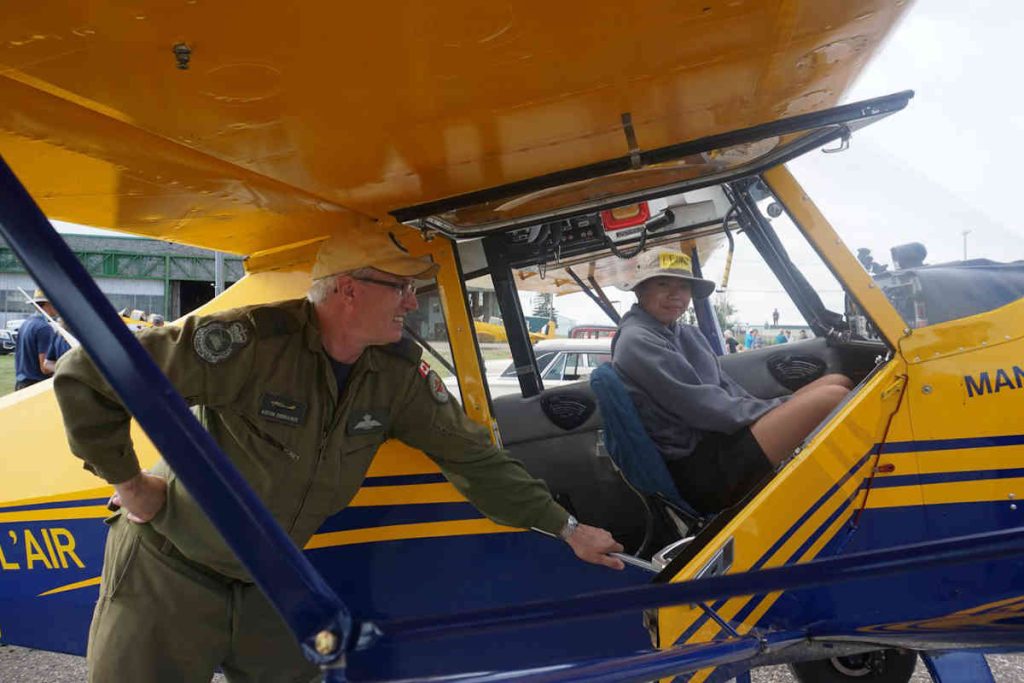 For the first time in three years, the Brandon Flying Centre was able to have its fly-in breakfast on Saturday.

People from all over the province — including some army, air and sea cadets from all over Canada — were present at the event on Saturday morning, coming by car and by airplane. Pancakes were made on demand and fresh coffee was flowing. A bouncy castle was set up for children to enjoy, while those who wished to take to the skies had the opportunity to do so thanks to the day’s ideal weather.

Despite the cloud cover and rain that fell on Brandon later in the day, the morning’s event went off without a hitch, with the sun breaking through the clouds and very little wind.

David Creighton, CEO of the Brandon Flight Centre, said the event was a wonderful opportunity to introduce people to aviation.

“Some folks want to come out and just see the airplanes, walk around and that, others just for a pancake breakfast, something to enjoy and of course the airplane rides are always a huge hit,” Creighton said. “It gets people out, and you never know — it might ignite that spark in somebody, a kid that maybe, 10, 15 years down the road might want to be a pilot or aircraft maintenance engineer.”

Ellen Fenerty, an office administrator at the centre, said the turnout to the event was incredible.

“I’m really loving how much of the community actually came by to see what’s up,” Fenerty told the Sun on Saturday.

Army, air and sea cadets from as far away as Thunder Bay, Ont., and Richmond, B.C., for their glider training program.

Kevin DeBiasio, a commanding officer with the Royal Canadian Air Cadets, said he’s thrilled to be doing summer training with the cadets again this year after a quiet two years due to the COVID-19 pandemic. DeBiasio said that during that time, a lot of the cadets aged out of the program after they turned 19.

“Getting new cadets in during COVID was tough, but we started meeting in person again in January or February, depending on the area.”

The program is managed by Canadian Armed Forces officers, most of whom are Cadet Instructors Cadre officers, and is the largest producer of glider pilots in Canada. Cadets between the ages of 16 and 18 are trained at the centres, and about 320 cadets receive their glider pilot licence each year. The program at the Brandon Flight Centre started during the first week of July and will run until the fourth week of August, when there will be a wing parade for the 19 graduates who took their training there.

The cadet program, however, is about more than just flying planes — or, in the case of army and sea cadets, doing exhibitions and sailing, respectively. DeBiasio said the program is all about leadership, physical activity and citizenship, the last virtue being the reason the air cadets were at the pancake breakfast in the first place. The cadets involved in the training program were on hand to help direct traffic, clean up the breakfast tables and make themselves useful in other ways.

“It’s using these activities to give the cadets the experiences and [teach them] how to be part of a group, how to better themselves,” DeBiasio said.

People who attended the breakfast also got a chance to take in displays from the local and national aviation industry.

The Road Rebels car club set up a display of their eye-catching vehicles at the event, Fast Air, a private jet air charter out of Winnipeg, came to display one of their executive charter airplanes.