There are people out there who simply don’t recognize opportunities until they are rapidly diminishing in their rear-view mirrors. For those that “get it,” a sound definition of opportunity might be as simple as this: it’s a set of circumstances that make it possible for you to “do something” – in other words take a chance to implement change or seek employment. 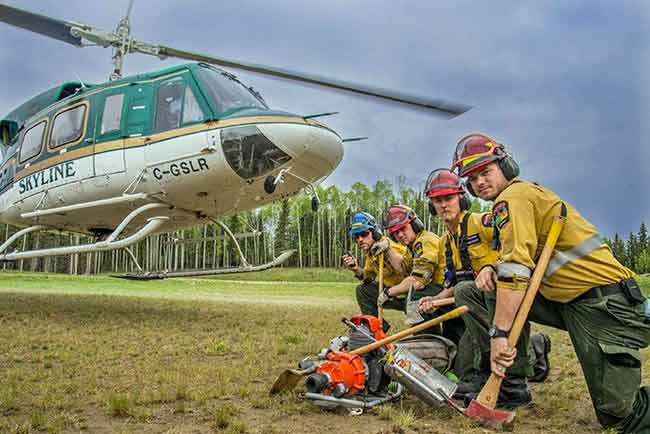 The Skyline team is working hard to stick to what works in a tough economy. There are people out there who simply don’t recognize opportunities

For Teri Northcott, a career in the Canadian commercial helicopter community has been a series of opportunities – ones she has capitalized on stretching back almost three decades. Early in her career, circumstances found her in Fort Worth, Texas, where she was offered the opportunity for some ab initio training on the AS355 Twin Star at what was then Aérospatiale. “I wasn’t there to get a pilot’s licence,” she recalls, “but I did some training and it wasn’t your normal R22.” Northcott had been involved with fixed-wing aviation before this point in her career, but the experience whetted her appetite for the rotary world.

Northcott’s next opportunity came with Frontier Helicopters, back around 1988. She had a chat with Frontier’s then general manager Terry Dixon and shortly after that, an opening presented itself and she jumped on it.

“It looked like a good idea and there was no turning back after that,” she recalls. “It was an exciting time to get into the business, as Frontier expanded from 18 helicopters to 42 that year. I thought this was fun and would keep me interested for a while.” Northcott laughs as she remembers this time in her career journey was all being accomplished while she was working out of an ATCO trailer that was pushed up against a chain-link fence in a corner of the parking lot.

Northcott stayed with Frontier for the next seven or eight years, then moved on to work with Mike Wiegele Heli-Skiing in Blue River, B.C. Next, and now with B.C.’s Northern Mountain Helicopters (which was eventually purchased by VIH Helicopters), Northcott was off to Yellowknife to help put together a joint venture under the banner of Nunasi Helicopters. After coming back to Prince George with Northern Mountain, she came back to Vancouver where she co-founded Resource Helicopters in 1997. Today, after 16 years with Resource, she is the accountable executive for Skyline Helicopters in Kelowna, B.C.

A New Frontier
It’s a challenging time in the helicopter business, at home and around the world. Skyline was built on the oil and gas business and the impact of current economic realities is being felt across the industry. The heli-skiing segment, in turn, is at the mercy of warmer winters and what that warming trend could bring to summer fire season is largely a matter of “wait and see” for operators that rely on its windfalls.

“It’s a completely shifting environment out there,” Northcott admits. “We are facing the same challenges as everyone else.” Skyline is positioning itself for the future with a fleet of four Bell 212HP helicopters and a single Finmeccanica Helicopters AW119 Koala MkII. Northcott says the 212HPs are some of the only HUMS-equipped 212s in the world.

In addition to trying to decipher the intricacies of the unpredictable helicopter market, Northcott has been actively involved with the Helicopter Association of Canada (HAC). Her participation dates back to the association’s inception. “When HAC started, I was still at Frontier,” she says. “Terry Dixon and I became very involved with HAC right from the get-go. We gravitated towards the issues of the day with the air taxi group, which spoke to what we were doing at Frontier. This was long before today’s formal committees, there were open forums that we called bull-pit sessions.”

Over the years, there was what she describes as an information evolution – one that saw her elevate to the position of chair of the air taxi committee. Northcott laughs about the process and speculates the role simply fell to her after Terry Churcott (2000-2003) and Terry Jones (2004-2005) were the chairs – it was all about the first name.

When Northcott became a member of the HAC Board of Directors in 2008, Jen Norrie came to the air taxi committee and Northcott served as board liaison to air taxi. As a director, Northcott served as the secretary to the board. The role of vice-chair followed, then the role of chair of the HAC board of directors followed after that. After stepping down as chair, she continued on for two years as immediate past chair, “to segue through the continuity and consistency to the board.”

There have been many issues of note over the years that have come through the air taxi committee. The evolution and introduction of technology such as satellite tracking and other systems was significant, but the development of pilot competencies is the one that has drawn interest from across the spectrum.

“[The issue] came up from the floor of an air taxi meeting in 2007, then in 2008,” she says. “I struck a very diverse group of small, medium and large operators, as well as agencies that used helicopters for wildfire suppression. I put together a panel of 12 people and we crafted the pilot competencies that are in use today and have become an industry norm.”

It wasn’t difficult to achieve because it was driven by the difficulty (at the time) of locating pilots for the forward suppression groups who had the minimum number of hours required – and those requirements weren’t necessarily based on the mission they would be flying. Mountain flying, for example, is a definite requirement in British Columbia, but not in Saskatchewan. Skills are not the same across the country from coast to coast. “We turned it into what the pilot skill sets were and what was actually required,” she says.

The outline for a competency-based training model was forged during a weekend in Edmonton, where the committee, “locked ourselves in meeting rooms for two solid days and brainstormed the ideas together. What were the main things that were similar across the board? How could each of the forestry agencies pick and choose which of the eight competences was applicable to their terrain and their requirements?

“There were some challenging times in those meeting rooms that weekend, but we worked together to develop the eight different groups that were specific to wildfire suppression,” she says. “Air taxi was completely the right venue and medium to bring that all together – and then I got the right people. Sometimes, you have to nudge people out of their chairs a little bit, but once you get their passion ignited, they’re all-in. It was a tremendous undertaking that has made an astronomical difference.”

The development of this HAC best practice and insight has a complete paradigm shift for the industry notes Northcott. Prior to the development of the concept, there was no consideration to a pilot having these skills. Northcott spoke on the subject before an international aerial firefighting conference in Richmond, B.C. in 2010 and the idea has drawn tremendous interest in Europe and Australia.

The pilot competencies were first adopted in 2010 and at their 2015 meetings. Air taxi undertook a five-year review. “[We did so] to see how they are doing,” Northcott says. “We wanted to determine what’s working, what isn’t working and to make it still relevant to the requirements of both the operators and the agencies.” The pilot competencies best practices were the first to be approved by HAC’s board of directors, but have since been joined by mountain flying, heli-skiing and Class D long-line.

The Skyline team is working hard to stick to what works in a tough economy.

In 2011, the Helicopter Association International (HAI) produced a feature video entitled, “Spotlight on Women in Helicopter Aviation” in conjunction with its annual conference in Orlando, Fla. Of the 13 woman profiled, representing the entire spectrum of the aviation business, the only non-American included was the chair of HAC’s board of directors, Teri Northcott. Talking about it recently, Northcott admitted “it was pretty cool.” The video was introduced by Colonel Sally Murphy, U.S. Army (ret). In 1974, Murphy became the first woman to graduate from the U.S. Army Aviation School. She was the Army’s first female helicopter and fixed-wing pilot. She went on to fly UH-1 and UH-60 helicopters. In the video, Murphy says it wasn’t so much a matter of kicking down doors, as much as the Army at the time was opening doors that had never been opened before.

Northcott admits that after the video came out, people have since come up to talk to her about how she has inspired them in their career development. “It humbles me that I was inspirational to them,” she says. “It’s given me a different perspective on things, to be more engaged in getting younger women to boldly come into the helicopter industry and not to let them think it’s not accessible to them.”

Northcott is proud to say that as far as she can tell, in 1997, she was only the second non-pilot that Transport Canada (TC) had awarded an Operations Manager certification to – the first being her friend Kathy Lalonde. Something else she is proud of? The safety record at Resource Helicopters over her 16-year tenure; there have been no accidents.

Moving Forward
Northcott came into the business on the high side, the year Frontier went from 18 machines to 42. She remembers thinking at the time, that it was fun and exciting and would keep her interested for a long time. It has been an interesting ride since and it promises to be every bit as interesting in the future.

“The future will be very challenging,” she says. “We’re all out there in the trenches doing what we can, but the Canadian helicopter industry is a lot different today than it was when I started. The drop in commodities, drop in oil prices, a bad fire season, the U.S. dollar, and manufacturer price increases – it goes on and on and on. I know there are challenges out there for pilots, especially low-time pilots, it’s the age-old struggle of trying to get time. At least there are lower insurance rates and a drop in fuel prices, but . . . We have to stay focused, stay safe and keep pushing ahead.”

Northcott’s view of the industry also applies to Skyline. It’s a mature company with a solid reputation and she is quick to say the solid reputation goes back long before her involvement with the company. “We don’t have challenges attracting staff and that speaks to the reputation of this company,” she says. “Our staff is unbelievably professional and they are solid going forward. You have to cut your chops somewhere else before you’re ready to be part of the Skyline team.

Knowing the team she has at Skyline, Northcott says she could not be more comfortable and proud.