Just over ten years ago – prior to the first war on Iraq – oil prices doubled before dropping by almost as much once hostilities ended. And while the current price seems to be following a similar trend, nothing should be taken for granted. 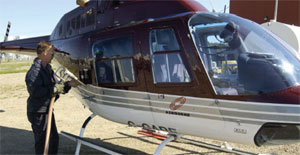 The price of aviation fuel peaked at US$36 a barrel last February.
Still, volatility remains. The price of West Texas Intermediate Crude
(a global benchmark) was dancing close to the US$25 mark in May, but
has since crept over US$30. And while a stronger Canadian dollar is
helping to soften the blow, the cost of hooking up a hose to a tank is
not giving helicopter owner/operators the stability they crave.

"Right
now we haven't got much planning stability," complained one operator.
"Up or down, we need to know how much the fuel is going to be three
months from now." That remains unlikely. The basic fundamentals of fuel
pricing – supply and demand – are too often masked by external factors.

Even
with current prices, 2002/03 has been a cruel year for crude. Political
instability in Venezuela (a major oil producer), tensions in the Middle
East and the fact that the global oil industry keeps fewer inventories
than was the case 10 years ago, each conspired to put upward pressure
on the price of oil.

Just over ten years ago – prior to the
first war on Iraq – oil prices doubled before dropping by almost as
much once hostilities ended. And while the current price seems to be
following a similar trend, nothing should be taken for granted.

What
this means for operators over the longer term, few are willing to
predict, although most agree that a soft landing around US$25 a barrel
would be preferable (compared with US$22 as a hoped-for outcome less
than 12 months ago).

"Oil prices will probably stay firm for the
short term, but at a price much higher than the US$25 benchmark,"
cautions Peter Coleman, president of Vancouver based Petro Value.

Petro
Value provides its customers with a one-stop “delivered price.” Its
pricing is drawn from supply working off different formulas. “Many
independent fuel suppliers generally form agreements with one of the
major [oil companies]. As a result they are an extension of one
formula. We have a month price, a week price and daily pricing. What is
happening is, in an inclining market we can protect them because they
are locked in for a month. If it’s declining we can react quickly with
that day and week number.”