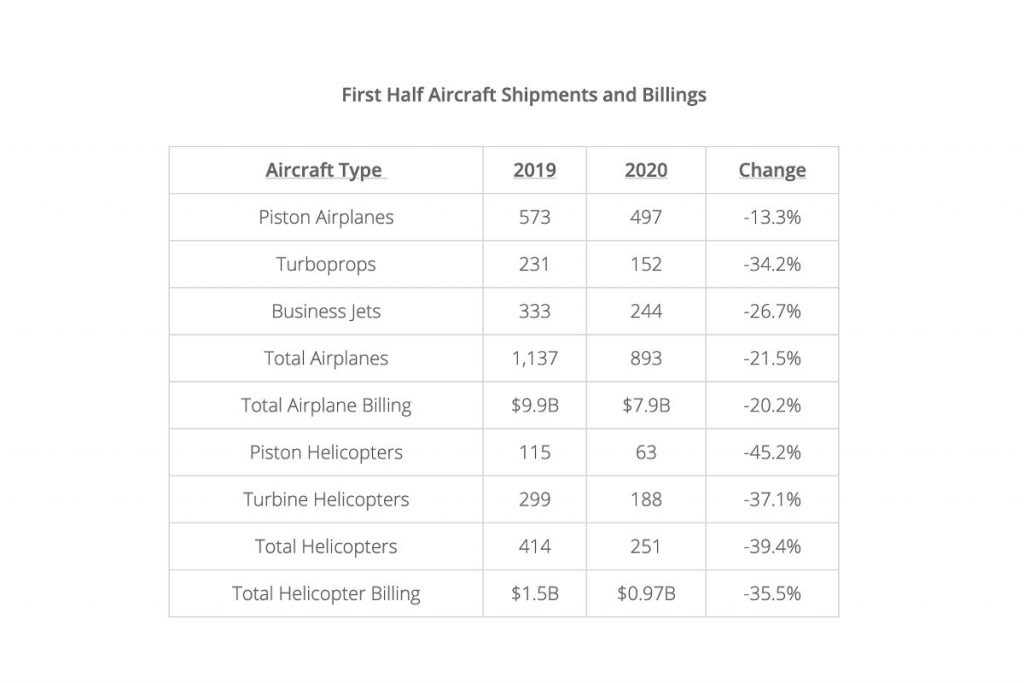 GAMA figures for aircraft shipments and billings for the first half of 2020. (Image: GAMA)

The General Aviation Manufacturers Association yesterday released its report of general aviation aircraft shipments and billings for the second quarter of 2020, ended June 30, and for the first half of its fiscal year. Piston, turboprop, business jet and helicopter deliveries declined across all segments during the first six months of 2020 as compared to the same period of 2019.

“With facilities conducting operations in a New Normal work environment, what has been very encouraging is that the supply chain has begun to stabilize and robust screening procedures and innovative work station COVID-19 mitigation protocols have resulted in very few virus transmission incidents,” said Pete Bunce, president and CEO, General Aviation Manufacturers Association (GAMA). “While continued mandated and voluntary restrictions on international business travel are producing stiff headwinds, flight activity for business aviation has appeared to return to around 85 per cent of pre-pandemic levels in U.S. domestic airspace, while piston, turboprop and rotorcraft flight activity has actually increased.”

Bunce continued to explain many travellers have also opted to explore the utility of general and business aviation for the first time. “We hope [this] will translate into future customers for the incredible and versatile products and services our industry has to offer,” he said.